The principle of autocollimation, realized with devices called autocollimators, has been used over several centuries for precisely measuring and consequently correcting angular alignments. It belongs to the area of optical metrology.

The basic principle of an autocollimator is quite simple: one directs a collimated beam, which by definition has a small beam divergence, to a flat reflecting object (a mirror) and detects the angular position of the reflected light, which typically needs to be close to direct back-reflection. Often, precise target alignment means that the sent-out beam is exactly reflected back into itself. Its angular position is usually converted into a spatial position by sending the beam through a focusing lens; the position of the resulting focused spot (e.g. on a screen with a fine scale or a position-sensitive detector or a focal plane array) directly reflects the beam angle before the lens. (The position change is approximately twice the focal length of the lens times the angular change in radians.) The same lens (or objective) may be used for collimating the outgoing beam, if the light source produces strongly diverging light. The setup of a simple traditional autocollimator is shown in Figure 1.

Modern autocollimators often contain a laser source, usually a low-power visible diode laser, instead of a traditional light source, because it is then easier to have a bright enough accurately collimated beam over large distances. Some instruments are optimized for a very high angular resolution, e.g. of 1 arcsecond or even better. A laser of safety class I is often sufficient, but sometimes class-II lasers are used.

Autocollimators should not be confused with autocorrelators, which are something completely different.

An electronic output can be quite convenient for various applications.

While traditional instruments use a screen for visual inspection, modern autocollimators often use some kind of electronic detector, e.g. a focal plane array or a photodiode array for measuring the spot position. (Note that the achieved resolution for the spot position can be far better than the pixel spacing of the detector; the resulting angular resolution can be substantially higher than for autocollimators with visual inspection.) The obtained angular position may then be displayed in a digital or analog format, and the resulting digital or analog output signal may also be used for other purposes. For example, it can be used in a feedback loop, also containing an electrically adjustable tilt device, for automatically stabilizing the angular position of the object under test. Instruments with an electronic output are called electronic autocollimators.

Apart from the achieved angular resolution, important performance parameters of electronic autocollimators are the angular range (for a given observation distance) and the acquisition rate. The practical usefulness may be greatly increased with a convenient digital interface (e.g. USB or ethernet) and software with a high-quality user interface, e.g. for displaying, long-term monitoring, storing and otherwise using measurement results on a computer.

Generally, the actual autocollimator is mounted on high quality opto-mechanics for precisely adjusting its position. Depending on the application, different kinds of mounting may be provided, for example on flat surfaces or on optical rails.

Autocollimators are applied both inside and outside the area of optics and laser technology; some examples:

The RP Photonics Buyer's Guide contains 8 suppliers for autocollimators. Among them: 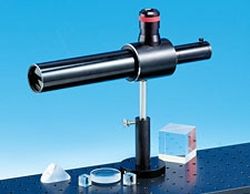