A special form of a thick biconvex optical lens is a ball lens, usually having the geometrical form of a ball (sphere). They are manufactured from a single material, usually an optical glass with good transparency in the wavelength region of interest. A frequently used material is fused silica.

Another variant are half-ball lenses, which are obtained simply by cutting ball lenses in half.

Ball lenses are usually made with relatively small diameters of a few millimeters or sometimes even less than 1 mm (microlenses). Particularly for such small dimensions, they are easier to fabricate than lenses with traditional designs.

Ball lenses exhibit substantial spherical aberrations when light propagation is not restricted to a small fraction of its cross-section. Examples are shown in Figures 1 and 2.

A special kind of micro-ball lens is obtained by heating the end of a tapered fiber such that it melts.

Ball lenses are used particularly as beam collimators for optical fibers (fiber collimators) and for fiber-to-fiber coupling. They are also suitable for miniature optics with applications like barcode scanning, as objective lenses in endoscopy and for optical sensors. There are also microscope objectives (particularly immersion objectives) which have a hyperhemisphere (e.g., somewhat more than a hemisphere) as the first lens.

There are two different definitions of focal length of a ball lens. The effective focal length, which is the distance between a plane through the center of the lens and the beam waist (focus) of an initially collimated input beam, is given by the equation

where D is the diameter of the lens ball and n its refractive index.

The back focal length is defined as the distance of the focal point from the lens surface, and is smaller than the effective focal length by half the diameter of the ball.

Just as other spherical lenses, ball lenses exhibit optical aberrations and in particular spherical aberrations (see Figure 1 and 2) when operated with incident beams having a diameter which is not much smaller than that of the ball. Therefore, the minimum possible spot size of the focus is not obtained for the largest possible input beam size, as it would be for a perfect lens.

It is possible to produce aspheric lenses with much weaker aberrations, using spherical ball lenses as a preform which are then appropriately deformed.

Natural ball lenses in the form of small water droplets cause the phenomenon of rainbows. The color effects of the primary (most prominent) row arise from light paths with a single internal reflection in a droplet. Sometimes one can see a secondary rainbow, arising from beam paths with two internal reflections.

The RP Photonics Buyer's Guide contains 16 suppliers for ball lenses. Among them: 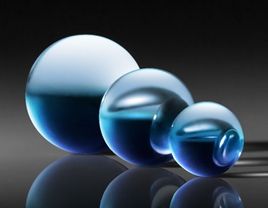 Ball Lenses are commonly used to improve signal quality in fiber coupling applications, or for use in endoscopy or bar code scanning applications. Our ball lenses feature short back focal lengths to minimize the distance needed from the ball lens to the optical fiber. Edmund Optics offers a variety of ball lenses in a range of substrates for performance in the ultraviolet to the NIR. Half-ball lenses are also available to ease mounting or system integration. 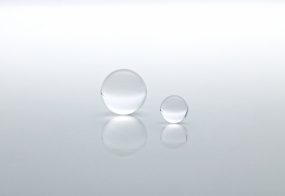