In laser technology and general optics, one often works with collimated beams, by definition having a roughly constant beam radius over some length. Sometimes, it is necessary to substantially modify a beam radius, for example in order to achieve a reduced beam divergence for transmitting the beam over a larger distance. For that purpose, beam expanders can be built and are also available as fixed optical components.

In most cases, a beam expander is realized as an optical telescope consisting of two lenses (in rare cases, of two curved mirrors). Two different configurations are common:

Fig. 1 shows the calculated evolution of beam radius for a Keplerian telescope for a 2 × beam expansion.

For achieving a given magnifying power (expansion ratio, ratio of beam radii), one may use different values of focal length. Most compact solutions are possible with small focal lengths, but there are limitations. In particular, one may then require lenses with very high numerical aperture, if at the same time a large output beam radius is required. Therefore, beam expanders for operation with large beams are tentatively longer.

Of course, a beam expander can also be operated “in reverse”, i.e., as a beam reducer.

There are variable beam expanders (zoom expanders), i.e., devices where the magnification can be adjusted in a certain range (e.g. from 2 × to 5 × or from 5 × to 10 ×). Those contain at least three lenses and some fine mechanics to adjust the position of at least one of them.

Beam Expanders for One Direction Only

Using cylindrical lenses, one can realize beam expanders which work in one direction only. For that purpose, one may also use anamorphic prism pairs.

A good familiarity with Gaussian beams is a good basis for understanding the operation of beam expanders and similar devices.

For minimum losses of optical power, the lenses are usually equipped with anti-reflection coatings. These, however, work only within a limited wavelength range.

For application with pulsed lasers, the used lens coatings should also have a sufficiently high optical damage threshold. Further, one should avoid operation with misaligned high-power beams, which could lead to overheating of some parts.

When modifying the beam radius, one also modifies the strength of beam pointing deviations. For example, doubling the beam radius implies that angular changes of the output beam are only half as strong as those of the input beam.

The RP Photonics Buyer's Guide contains 50 suppliers for beam expanders. Among them: 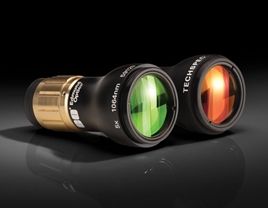 Edmund Optics has a variety of beam expanders, including devices for different wavelength regions (e.g. Nd:YAG and CO2), rotating or non-rotating optics for divergence adjustment and research-grade devices. 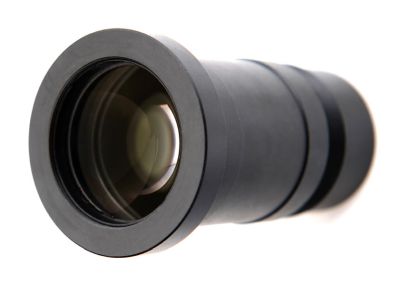 Shanghai Optics Inc's custom beam expanders are used in many applications such as laser ranging, laser illumination, interferometry, etc. In high-power laser systems, beam expanders are used increase the beam area without significantly affecting the total laser energy. This results in a reduction of the laser power density which reduce the risk of damaging the coatings and optical materials of optical components. In a laser ranging system, a beam expander is used to minimize the laser divergence, resulting in a smaller collimated beam at a long distance.

Photonic Devices' precision Galilean beam expanders have been sold globally for over 20 years and include an extensive number of standard models. These multi-element beam expanders have been computer-designed to provide excellent wavefront quality with minimum beam deformation. All lens elements are air spaced and the majority of models have variable air spacing for collimation adjustment. All lens surfaces have multilayer antireflection coatings, with power handling capabilities over 1 kW (> 200 W for beam expanders operating at 10.6 microns).

Available in singlet, doublet (positive and negative focal lengths) and triplet varieties, Knight Optical can supply customised beam expanders for a range of laser-based, cutting-edge projects. Whether your application works in the ultraviolet (UV), visible, near-infrared (NIR), mid-infrared (MIR) or far-infrared (FIR) spectrum, opting for our custom-made components allows you to specify suitable substrates for your required wavelength.