Beam homogenizers are optical devices which are used to modify a laser beam (or sometimes some other light beam) such that one obtains a nearly constant optical intensity over some area, and negligible intensity outside that area. Such flat-top beams are required for some applications, in particular for some forms of laser material processing and optical lithography (e.g. for computer chip manufacturing), where one needs to expose a certain area on a workpiece to a well defined amount of optical radiation.

Beam homogenizers generally apply a random or quasi-random changes to the amplitude profile of a beam, and in that aspect they profoundly differ from beam shapers, which work in a deterministic manner.

Many beam homogenizers produce the wanted homogenized beam profile in a focal plane, while others do that for the far field. The shape of the produced intensity profile is often a square shape, in other cases a circle.

Quality of homogenization and optical efficiency are the key aspects of the performance of a beam homogenizer.

The generated beam profile is generally not perfectly flat, but exhibits some level of random fluctuations, sometimes also relatively regular interference patterns. Depending on the requirements of the application, more or less sophisticated operation principles are required to obtain a sufficiently high quality of homogenization in conjunction with a high enough optical efficiency.

Operation principles of beam homogenizers are generally not easy to understand.

The operation principles of beam homogenizers can vary substantially and often involve sophisticated considerations. Conceptually simple approaches like using a simple random diffuser plate are often not sufficient, since the required quality of homogenization could not be achieved together with a high optical efficiency, i.e., with a high optical power throughput. Therefore, more advanced concepts have been developed:

Which operation principle is most suitable for an application generally depends on the detailed requirements and on the coherence properties of the input beam. The Fresnel number is sometimes taken as a criterion for the choice of such methods.

The RP Photonics Buyer's Guide contains 16 suppliers for beam homogenizers. Among them: 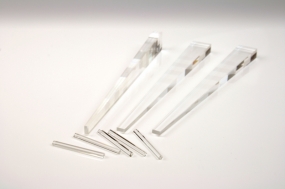 As the name suggests, beam homogenisers are used to produce uniform beam profiles. Used for the most forward-thinking laser-based applications, our beam homogeniser range is only available in a custom-made option to meet the precise needs of each application. Commonly specified in BK7 (or equivalent) and UV-grade fused silica substrates, Knight Optical's custom-made homogenising rods are also available with rod holders for seamless integration. 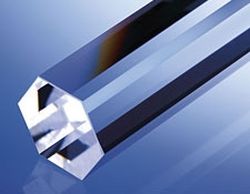