If a laser beam is unwanted at certain times, one may in principle turn off the laser. This, however, is not always practical; particularly high-power lasers are often designed to operate continuously over longer times and need some warm-up time before reaching full performance. Therefore, one often uses a beam shutter for blocking a beam when required.

Beam shutters typically interrupt or release a beam by inserting or removing an absorbing or reflecting blade. This process may be controlled manually, but often there is an electromechanical actuator for remote-controlled and/or automatic operation. For example, beam shutters are often connected to laser safety interlocks so that laser hazards are avoided e.g. when a laser enclosure is opened. For fail-safe operation, a shutter device may be made such that it automatically closes when its control signal disappears – for example, simply with a spring or based on gravity. The risk of jamming should be minimized with an appropriate design.

Reliability may be more important than the switching speed.

Switching times can be quite different – often of the order of 10 ms, but sometimes well below 1 ms. For laser safety applications, particularly fast switching is often not required. A more important aspect is the reliability of blocking the beam.

In the open state, a beam shutter should have no effect on the laser beam at all, assuming that its open aperture is large enough for the beam. In the closed state, the whole laser power should be safely dissipated, without causing reflections back into the laser or significant stray light.

There are also diaphragm beam shutters with multiple blades, where the opening starts in the center of the beam rather than from the side. The extent of shutter opening may be varied, e.g. for adjusting the level of illumination.

In some cases, one may use a shutter device without moving parts – for example, an electrically controlled optical attenuator based on a liquid crystal modulator Such devices differ substantially from regular beam shutters. For example, they may not provide complete transmission or complete blocking, their operation is polarization-dependent, and the power handling capability is limited. This article focuses on beam shutters with moving parts.

Beam shutters are often designed to withstand substantial laser powers. For lasers with moderate optical power (e.g. up to a few watts), a beam shutter may simply contain a robust absorber. For higher power levels, it may contain a movable mirror for directing the beam into a beam dump, which may be fan-cooled or water-cooled. In some cases, there should be a good thermal contact to the base plate on which the shutter is mounted.

Overheating a shutter by operation with too high optical power in the closed state (or for too long time under such conditions) may result in permanent damage, or to temporary failure of the shutting mechanism.

In any case, a laser beam with significant optical power should not be sent into a beam shutter with a too small beam radius, because otherwise the absorber could be damaged.

Laser beam shutters are often provided together with suitable electronic controllers. The controller may need to provide a certain voltage for switching but only a significantly lower voltage (and current) for holding the shutter open. That feature will not only limit the heating of the actuator and the power consumption, but may also allow for quicker closing.

There are stand-alone controllers with a front panel for interaction with the user; others are made for integration into other devices as OEM laser modules. A shutter driver may also be included in a laser interlock device.

Controllers often allow manual triggering with buttons on the front panel. Some can be programmed e.g. to produce certain open/close sequences with precise timing.

A key switch may be used to ensure that only an authorized person, having the key, can open the beam path.

Some devices have a digital interface, e.g. of TTL, USB or RS-232 type. In case of USB, it is sometimes possible to also obtain electrical power in that way, thus not requiring a separate power cable and adapter. The received input signals may not only directly open or close the shutter, but also trigger pre-programmed operation sequences, or program such sequences. There may also be a return channel e.g. for checking the state of the device.

There may be in additional safety interlock input, with which the opening by the regular control signal can be blocked.

Some laser beam shutters contain an electronic sensor for checking whether the shutter has really opened or closed. This can be useful to detect defects, which may otherwise have dangerous consequences. While such a defect is detected, the controller may provide of warning for users and/or transmit a signal to other devices.

The RP Photonics Buyer's Guide contains 17 suppliers for beam shutters. Among them: 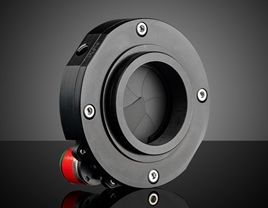