Due to its high flexibility, the powerful software RP Coating is well suited for designing optimized chirped mirrors.

A chirped mirror is a kind of dielectric dispersive mirror with a spatial variation of the layer thickness values. Such mirrors are used for dispersion compensation in mode-locked lasers, for example. Another interesting feature of such mirrors is that they make it possible to achieve a broader reflection bandwidth than ordinary Bragg mirrors. Due to the many dimensions of possible optimization, chirped mirrors are often sold as custom optics.

The basic idea of chirped mirror designs [1] is that the Bragg wavelength is not constant but varies within the structure (along the propagation direction), so that light at different wavelengths penetrates to a different extent into the mirror structure and thus experiences a different group delay.

However, a naïve design directly based on this idea would not work: it would exhibit strong oscillations of the group delay and even more so of the group delay dispersion. This disturbing effect can to some extent be mitigated by numerical optimization of the layer structure, but this is difficult because the optimization has to be done in a multi-dimensional space (resulting from the large number of layers) where a huge number of local optima exist, most of which do not correspond to satisfactory designs.

Later, it was found [5] that the disturbing oscillations have two origins:

Both problems can be eliminated with a double-chirped design, which has two additional features:

For mode-locked lasers with an ultrabroad bandwidth, as required for operation in the few-cycle regime, it is challenging to design mirrors with the corresponding ultrabroad reflection bandwidth, combined with proper chromatic dispersion over the most of that range. The factor limiting the bandwidth achievable is in most cases the difficulty of making anti-reflection structures with very small residual reflectance over a large bandwidth. This problem can be solved with so-called backside coated (BASIC) chirped mirrors [11]. The key idea of such a design is to interface the chirped mirror structure with a glass substrate rather than with air; the air–glass interface is then at a different location, and the effects of the residual reflectance of that (also AR-coated) surface can be eliminated by using a wedge shape for that glass piece.

Double-chirped mirrors (DCMs) are often used for dispersion compensation in mode-locked lasers, particularly for those with pulse durations below ≈ 20 fs. They are typically designed not only to compensate a constant group delay dispersion, but also to correct higher-order dispersion. However, there are limits concerning how much dispersion (and in particular higher-order dispersion) can be compensated with a double-chirped mirror. Possible solutions are to use a suitable combination of several mirrors, where the dispersion errors from different mirrors partially cancel each other, and to combine chirped mirrors with a prism pair. Another challenge arises from the tight fabrication tolerances; at least some of the layers typically have to be fabricated with a precision of the thickness of a few nanometers. The remaining wiggles in the group delay versus wavelength can be further reduced by using appropriate combinations of mirrors where the wiggles at least partially cancel each other.

It has been shown [10] that double-chirped mirror designs can also be used with semiconductor mirrors. Such mirrors can generate a much higher amount of dispersion, although in a much smaller bandwidth. They can be used for compensating the dispersion in a mode-locked laser with a single compact device even when e.g. a long pulse duration requires a high amount of anomalous dispersion for soliton mode locking.

The RP Photonics Buyer's Guide contains 15 suppliers for chirped mirrors. Among them:

LASEROPTIK designs and produces various kinds of dispersive coatings, including chirped mirrors and matched pairs of chirped mirrors, also all other kinds of coated optics for dispersion management like GTI mirrors. We use Ion Beam Sputtering (IBS) for highest quality and widely ranging dispersion measurement setups for precise characterization. 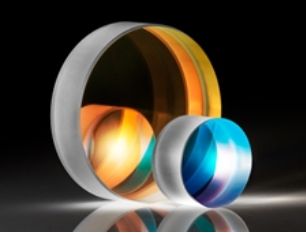 Edmund Optics offers various kinds of mirrors for ultrafast laser technology, including highly dispersive chirped mirrors for different spectral regions such as 0.8 μm, 1 μm and 2 μm, but also UV and other infrared versions.