Optical elements and systems are usually operated in a rather clean environment, e.g. within a housing which is protected against dust and dirt with optical windows, or in a clean laser laboratory. Nevertheless, it is sometimes necessary to clean optical elements like laser mirrors, lenses, laser crystals and nonlinear crystals – for example,

In conjunction with intense laser beams, dust and smudges may not only lead to performance degradations, but even to permanent damage of optical components, when such contaminations are burned in.

Careful cleaning procedures and the use of appropriate cleaning equipment are important for two reasons:

Perfect cleanliness is not required throughout! Try to estimate how critical it is before applying lengthy procedures.

Note, however, that perfect cleanliness is not essential in all cases. For example, some dust particles on a photographic objective will not produce isolated defects in photographic images, because they are not imaged to the light sensor and only lead to well spread modifications which are hard to detect and thus hardly disturbing.

Having a particularly clean area for inspection and cleaning purposes in a laboratory can be important.
The use of inappropriate tools as a frequent cause of optics damage.

High-quality gloves are available for optics cleaning, for example nitrile clean room gloves which are thin enough to give sufficient haptic feedback and at the same time sufficiently resistant for avoiding puncture. Some gloves are optimized for good grip, reducing the risk of dropping sensitive components. When using latex gloves, these should be powder-free. For some operations, fingercots may be sufficient, which can be more comfortable to wear.

Some types of optical components are notoriously sensitive and very hard to clean. Some examples:

Some optical components can hardly be cleaned, or at least not with effective methods.

It is often useful to have suitable inspection tools, with which one e.g. clearly see dust particles, fingerprints and the like. They also allow one to monitor the success of cleaning attempts. One may use an instrument like a loupe, a magnifying glass or a microscope in conjunction with suitable illumination.

It can also be essential to distinguish contaminations from damaged spots; obviously it won't help to wipe over pits and scratches, possibly increasing the damage further.

Obviously, inspection tools can be used effectively only when it is made convenient e.g. to sit at an appropriate height and to lay down or mount the inspected part on clean and soft surfaces. Sufficient illumination is also critical.

In some situations, it is not possible to see relevant contaminations!

In some cases, proper inspection is not possible, e.g. because critical parts are not well accessible or tiny contaminations are sufficient for spoiling performance. This may easily be the case for interferometer mirrors, for example. One may then have to use blind cleaning procedures, where success is assessed only by testing of the optical device performance later on. This can be tedious particularly when multiple mirrors are in a setup and it is difficult to find out which one degrades the performance.

Be Aware of Coatings

When cleaning optical surfaces, one should always be aware that they may have thin coatings (e.g. anti-reflection coatings) which are more sensitive than the bulk material below. Of course, one may not easily recognize the presence of a coating. Some coatings can temporarily incorporate water (e.g. in porous TiO2 layers) which modifies the optical properties; one should then of course avoid water as a cleaning agent.

Contaminations which are only lightly attached to optical components, for example dust particles, can often be removed with compressed air – a method which minimizes the risk of damage and can be applied even to particularly sensitive parts such as metal-coated mirrors and diffraction gratings. (Only in few cases such as pellicle beamsplitters, there is a substantial risk of damage.)

Of course, one should never simply blow with the mouth against optical components, since that way one could easily contaminate them with saliva. For occasional use, there are disposable compressed air devices with which one can direct bursts of clean and dry air to optical surfaces. With suitable nozzles, one may even reach areas which would be difficult to clean with any other tools.

There are also cans containing a liquid which evaporates as a dusting gas and can produce larger volumes of gas over time. One should hold them upright during use and not shake them before use, because otherwise droplets of fluid may emerge.

There are also hand-held air blowers with which one can pump air from the room, which is hopefully clean enough.

Many lenses and optical filters are made from relatively robust glass materials which can reasonably well be cleaned with appropriate procedures and tools.

It is common to use soft lens tissues, e.g. as disposable wipes which can effectively bind dust while not scratching sensitive surfaces or releasing hair. Also, there are microfiber cleaning cloths which may be used several times. For larger surfaces, one may use precision wiping tissues, which are far cleaner than standard household wipes, for example. Various similar tissues and cloths are available, including pre-moistened towelettes.

It is generally recommended not to repeatedly wipe back and forth on optical surfaces, because that way one may only redistribute contaminants. Instead, it is often better to carefully drag a cloth or lens tissue, wetted with a solvent, across the surface just once, or several times from the center in different directions. Some amount of pressure, which should of course not be excessive, may make the cleaning procedure more effective.

Solvents can help a lot, when applying the right amount of a suitable substance.

Various solvents may be appropriate, depending on the material and the type of contamination to be removed. For example, distilled or deionized water may be suitable in some cases, but not when removing fat e.g. from fingerprints. Reagent-grade isopropyl alcohol, methanol or acetone are more effective for such purposes. It is essential to use suitable gloves not only to protect the skin of the fingers (which is degraded particularly by acetone), but also to avoid that fat from the skin is dissolved and then deposited on optical surfaces. Performing cleaning processes slowly gives the solvent more time to dissolve contaminants like fat.

Even a glass lens should not be cleaned with acetone if it has a plastic mount, since the acetone could dissolve plastic and deposit it on the lens surface. Alcohol would usually be suitable, but in case of doubt one should ask the supplier.

Note that small amounts of a solvent will rapidly evaporate after application, leaving residues if it has solved some fat, for example. Therefore, it is essential that such contaminants are dragged away, rather than only spread on the surface. Ideally, most of the solvent itself is also dragged away by the tissue; one should therefore avoid using excessive amounts of solvent.

The drop-and-drag method is suitable for weak contaminations.

Similar considerations as for lenses applied to laser mirrors, only that those are often substantially more sensitive. A frequently used cleaning method is to slowly drag a single sheet of lens tissue, soaked with a drop of a suitable solvent, once across the mirror surface, holding the tissue only at the sides without applying additional pressure.

If the drop-and-drag method is not sufficient, one may have to carefully wipe the surface with some moderate pressure, using multiple layers of lens tissue which are folded and held with a plier. Only the fold of the tissue is used to touch the optical surface, and is slightly soaked with solvent. Of course, one must avoid touching the optical surface with the plier.

Even more effective cleaning is possible by wiping the surface with folded tissue held between fingers (with gloves), applying some more pressure. That more aggressive technique increases the risk of damage, however.

There are devices for ultrasonic cleaning, where optical components such as lenses are immersed in a cleaning solvent (e.g. a solution of optical soap) and exposed to intense ultrasound. Subsequently, they are rinsed with fresh solvent. This method may be useful for removing more persistent dirt, but is too aggressive e.g. for many ruled diffraction gratings.

Alternatively, one may use immersion without ultrasound as a less aggressive, but also less effective technique.

In some cases, the suppliers of optical components provide detailed instructions for cleaning. It is advisable to carefully observe them in order to clean most successfully and not to lose free replacement options.

A frequent risk is that such instructions are forgotten or lost at the point where they would be needed. To avoid that, it is advisable to use appropriate filing systems (e.g. on paper or computers) so that such documents can be found and retrieved when needed.

The RP Photonics Buyer's Guide contains 26 suppliers for optics cleaning equipment. Among them: 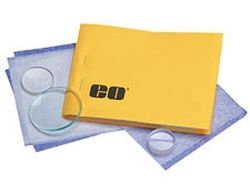 Edmund Optics offers a wide range of optical cleaning products suited for most cleaning needs. Lens tissue and cloth are ideal for removing oils or residue without the danger of scratching the surface of an optical component. Compressed air cleans by firing concentrated bursts of dry air to remove dust or other particulate without touching the component with potentially damaging instruments. Gloves are composed of a selection of smooth materials which allow components to be safely handled without reducing dexterity. A selection of lens pouches is also available for clean, safe storage.