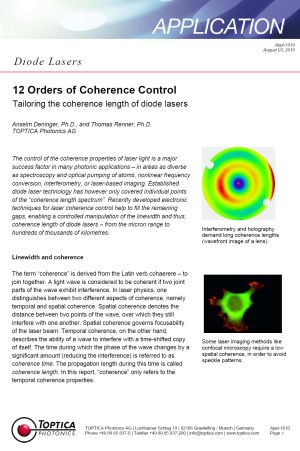 Ask RP Photonics for advice concerning the measurement and the effects of coherence in optical systems.

Coherence is one of the most important concepts in optics and is strongly related to the ability of light to exhibit interference effects. A light field is called coherent when there is a fixed phase relationship between the electric field values at different locations or at different times. Partial coherence means that there is some (although not perfect) correlation between phase values. There are various ways of quantifying the degree of coherence, as described below.

It is also common to call certain processes or techniques coherent or incoherent. In that case, “coherent” essentially means phase-sensitive. For example, the general method of coherent beam combining relies on the mutual coherence of beams, whereas spectral (incoherent) beam combining does not

There are two very different aspects of coherence:

Lasers have the potential for generating beams (e.g. Gaussian beams) with very high spatial coherence, and this is perhaps the most fundamental difference between laser light and radiation from other light sources. High spatial coherence arises from the existence of resonator modes, which define spatially correlated field patterns. In situations where only a single resonator mode has sufficient laser gain to oscillate, a single longitudinal mode can be selected, obtaining single-frequency operation with very high temporal coherence as well.

Figure 3 shows a beam with high spatial coherence, but poor temporal coherence. The wavefronts are formed as above, and the beam quality is still very high, but the amplitude and phase of the beam varies along the propagation direction. Note that both the local amplitude and the spacing of the wavefronts vary to some extent. Such a beam can be generated e.g. from the output of a supercontinuum source.

Figure 4 shows a laser beam with reduced spatial coherence, but high temporal coherence. The wavefronts are deformed, and this results in a high beam divergence and poor beam quality. On the other hand, the beam is monochromatic, so that the spacing of the deformed wavefronts remains constant. Such a beam can result from a single-frequency laser, when its output is sent through some optically inhomogeneous material.

If a laser beam with high spatial coherence is sent through an optical diffuser element (for example, a very inhomogeneous piece of glass) which totally scrambles the wavefront, the resulting distorted beam could in principle still be considered as spatially coherent, since the phase relationship between the electric fields at different points would still be fixed, as long as the wavefront distortions do not change with time. It would then also in principle be possible to restore a simple beam shape by applying another optical element which compensates the complicated spatial distortions. For most practical purposes, however, such a distorted beam will be spatially incoherent. Nevertheless, a real destruction of spatial coherence requires time-dependent wavefront distortions, as can be obtained with a rotating diffuser, for example. In that case, the temporal coherence is also somewhat degraded.

There are different ways to quantify the degree of coherence:

The relationship between optical bandwidth and temporal coherence can be non-trivial. For example, a pulse train from a mode-locked laser can have a broad overall bandwidth, with the Fourier spectrum consisting of discrete very narrow lines (→ frequency combs). The temporal coherence can be very high in the sense that there are strong field correlations for large time delays which are close to integer multiples of the pulse period. (See also the discussion on the coherence of supercontinua, and the article concerning coherence of ultrashort pulses in the Photonics Spotlight.)

Importance of Coherence in Applications

Some applications need light with very high spatial and temporal coherence. This applies, e.g., to many variations of interferometry, holography, and some types of optical sensors (e.g. fiber-optic sensors). Such features are also important for the technique of coherent beam combining.

In quantum optics, the term coherence is often used for the state of light-emitting atoms or ions. In that case, coherence refers to a phase relationship between the complex amplitudes corresponding to electronic states. This is important, e.g., in the context of lasing without inversion. There is also the term “coherent states” of the light field, which has yet another meaning.

The RP Photonics Buyer's Guide contains 2 suppliers for coherence measurement devices. Among them: 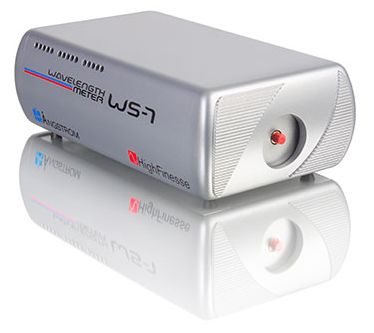 There is not a single universal technique to measure laser linewidths or coherence lengths. Different setups are employed for different linewidth regimes. See our application note on coherence issues.