Particularly for image projectors which contain some kind of incandescent lamp (e.g. a halogen lamp) as light source for the illumination, there can be a substantial heat load on the optical system. This is essentially because not only the desired visible light is generated, but also the more substantial power in the infrared. That infrared light may be absorbed in optical glasses, for example, heat them up, and cause various kinds of detrimental effects, such as mechanical stress and deformations which cause optical aberrations.

In order to eliminate or at least mitigate that problem, special mirrors (heat control filters) have been developed which can work in two different ways as optical filters for removing infrared light:

Cold mirrors are realized as dielectric mirrors. They should ideally reflect all visible light, but this is challenging for a dielectric mirror. Therefore, there can be a substantial loss for the shortest and longest parts of the visible wavelength region, i.e., for blue and red light. The substrate will usually transmit the shorter wavelength components of the infrared, while absorbing the longer wavelength components.

The infrared absorption in the mirror substrate may lead to some thermal effects in the mirror, which may more or less degrade the system performance. Such effects can be minimized by using a substrate glass with particularly good thermal resistance, including relatively small thermal expansion. For example, borosilicate glasses and fused silica are suitable for that purpose. Soda–lime glasses are sufficient only for lower powers.

As is common for dielectric mirrors, the reflection spectrum is optimized for a certain angle of incidence – for example, for normal incidence or for 45° – and the performance can be substantially worse for other incidence angles.

There are also UV cold mirrors, which are reflecting in the ultraviolet region while transmitting visible and infrared light. They are used for processes like semiconductor chip manufacturing and the photopolymerization of inks, dyes or adhesives, where the UV light is needed for the process and other light would be disturbing through thermal or other effects.

The RP Photonics Buyer's Guide contains 20 suppliers for cold mirrors. Among them: 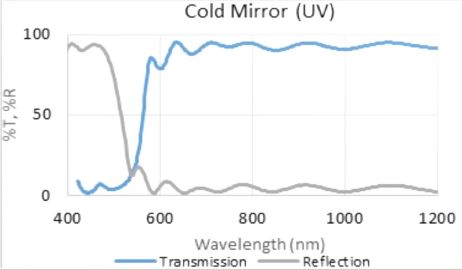 VisiMax offers various kinds of optical filters, including filters to be used as cold mirrors, which reflect only visible radiation and thus help to reduce the heat low in optical systems. 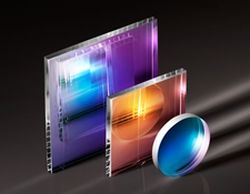 Edmund Optics offers different kinds of cold mirrors, including versions with 0° and 45° angle of incidence and high performance versions with multi-layer dielectric coatings.