A condenser is an optical device which is used for conditioning illumination light, for example in an optical microscope or an image projector. Typically, it contains one or more lenses and a diaphragm. Even multi-lens condensers are often called condenser lenses.

A microscope condenser can have a substantial influence on the imaging performance of the instrument. Several different aspects need to be considered:

For a high image brightness, a condenser should send as much as possible of the available illumination light to the specimen, and this under conditions where the light is usable for image formation. In bright field transmission microscopy, for example, one should create a light cone where the range of propagation angles approximately matches the numerical aperture of the used objective (or is slightly smaller):

The maximum numerical aperture (or its range) can often be read from an engraving on the condenser housing. There may also be a scale which indicates the related numerical aperture, so that it can be correctly chosen corresponding to the used objective.

A condenser should provide uniform illumination of the object. It should be avoided, for example, to image the filament of an illumination lamp (typically a tungsten halogen lamp) onto the specimen, resulting into a severe modulation of illumination intensity. The common method of Köhler illumination avoids that problem by creating illumination conjugate planes which are well separated from the image-forming conjugate planes.

Substantial chromatic effects, resulting from chromatic dispersion of the optics, should be avoided for reaching optimum image quality. Therefore, achromatic condensers e.g. with three or four lenses have been developed.

Due to the high angular range of the illumination light to be handled, it can also be advantageous to have an aplanatic condenser or a condenser with an aspheric lens which minimizes spherical aberrations. Aspheric condensers allow for the realization of the largest angular opening, i.e., smallest f-numbers.

With more sophisticated condenser designs, it is also possible to correct for spherical and chromatic aberrations at the same time; one then has an achromatic compound condenser, also called aplanatic–achromatic condenser.

In simple microscopes, one still often uses the simple Abbe condenser with two lenses, which is not corrected for chromatic or spherical aberrations.

The applied correction (e.g. aplanatic or achromatic) can often be read from an engraving on the condenser housing.

Additional items are required for modified microscopy techniques. For example, a dark field stop is required for dark field microscopy, and phase rings are applied for phase contrast microscopy. Such optical elements may be inserted in a slot between the illuminator and the condenser.

In some cases, where objectives with a wide range of magnifications can be used, it is even necessary to exchange condensers or at least to insert or remove the top lens, since the required condenser parameter ranges in terms of illuminated area and NA otherwise cannot be spanned.

For illumination systems with high power, there may be substantial heating effects in the condenser, which can exclude the use of plastic optics and even of cemented optics.

Condensers for Other Devices

For use in various types of image projectors, and also requires condensers, but with requirements which are substantially different from those in microscopes. For example, the transmitted optical power may be substantially larger, but the required opening angle can be much smaller, and the properties of the used light sources also vary substantially. Because of those variable requirements, very different condenser designs are used in practice. In many cases, essentially some combination of lenses is used, sometimes including special forms like meniscus lenses and ball lenses. In some cases, one also uses microlens arrays (fly's eye arrays, or sometimes with cylindrical lenses) for achieving the required uniformity of illumination; see also the article on beam homogenizers.

The RP Photonics Buyer's Guide contains 12 suppliers for condensers. Among them: 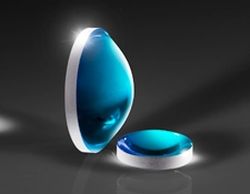 Edmund Optics offers molded condenser lenses for illumination applications, including both spherical and aspheric designs, some of them with a high numerical aperture.

Available as a custom-made component or from our vast range of stock in up to 250 mm diameters, thicknesses up to 38 mm and in AR-coated or uncoated options, Knight Optical's condenser lenses provide a high-quality, economical optical solution for applications such as enlargers and illumination lighting systems.

See also: beam collimators
and other articles in the categories general optics, vision, displays and imaging