Corner cube prisms are prisms which act as corner reflectors, a type of retroreflectors. The basic operation principle is that there are internal reflections on three mutually orthogonal prism surfaces, leading to a direction of a reflected beam which is nominally parallel to the direction of the incident beam – with the accuracy limited only by the accuracy of the surface orientation of the prism. Precision prisms can offer excellent parallelism of incoming and reflecting beams. It is usually specified as an angular deviation, e.g. < 2 arcseconds.

The operation principle is illustrated in Figure 1 for a device which works only in one plane and involves two reflections. A tilt of the prism around one axis can still modify the direction of the reflected beam. Only by using three such reflections, that can be avoided.

Of course, the retroreflection works properly with a laser beam only when it fully hits one of the reflecting surfaces; it should not be directed into the corner.

Corner cube prisms may be supplied as bare prisms, or together with holds for mounting e.g. to a surface. They are often used in the context of optical metrology, e.g. in interferometers, and in spectroscopy.

The RP Photonics Buyer's Guide contains 12 suppliers for corner cube prisms. Among them:

Selection of corner cube prisms for quick delivery. Custom metal or dielectric coatings can be applied on request. 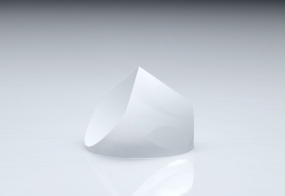 Knight Optical's corner cube prisms are available as custom-made components in bespoke sizes and substrates to meet the precise needs of your beam-steering and surveying applications. What's more, we offer the option of mounted and unmounted variants for a range of projects. 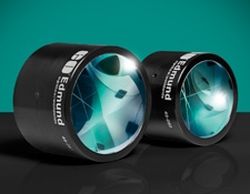 See also: prisms, retroreflectors
and other articles in the category general optics