Optical crystals often need to be operated in an oven at an elevated and stable temperature. There are different reasons for that need:

Operation of a crystal at elevated temperatures is possible in a suitable crystal oven in combination with an electronic temperature controller (essentially a thermostat). The oven heaters are usually of simple resistive type, but Peltier elements are also used if the temperature differences are not too high (e.g., of the order of 30 Kelvin). Various technical challenges and possible solutions are discussed in the following. On that basis it is easy to recognize that a simple home-made oven with non-optimized design can not achieve the highest performance in all relevant respects. Also, it is clear that the oven design involves certain trade-offs, and these should ideally be done knowing the concrete requirements.

Many crystal ovens can be operated up to about 200 °C, but some models can go much higher. The maximum temperature at which an oven can be operated is normally limited by the durability of materials, or possibly by the available heating power. Of course, it must be ensured that there is no substantial out-gasing from any materials of the oven, which might be deposited on the crystal's end faces.

High oven temperatures also lead to stronger convection currents in the ambient air. As the density and thus the refractive index of air is reduced for higher temperatures, convection of air can lead to disturbing beam distortions and deflections which fluctuate.

The minimum temperature often has to be somewhat above the ambient temperature, since otherwise the heat flow becomes very weak, and the settling time (see below) becomes too long.

Precision and Homogeneity of the Temperature

The phase-matching conditions for nonlinear processes in crystals are often highly temperature-sensitive; the phase-matching bandwidth in terms of temperature is sometimes well below 1 K, although in other cases it may be several Kelvin. This means that in some cases the temperature should be kept very precisely at the desired value.

In addition, one should also have quite low temperature variations along the whole beam path. A common problem is that the ends of the crystal are somewhat colder than the middle, e.g. because they are exposed to colder air (see below). This can lead to some reduction in power conversion efficiency or in the gain of an optical parametric amplifier. Figure 1 illustrates this effect. A reduced magnitude of temperature variations can tentatively be achieved with a longer oven design.

Particularly sensitive conditions arise for certain crystal materials and phase-matching configurations, and if a long nonlinear crystal is used. Note that for a long crystal the temperature deviations from the average must be smaller than for a short one, while it also becomes more difficult to obtain even the same maximum temperature deviations as for a short crystal. To achieve a certain temperature homogeneity also becomes more challenging for higher operation temperatures, as these imply higher thermal powers and thus higher thermal gradients within the oven.

Before deciding for an oven design, one should calculate how stringent the demands on temperature homogeneity are. An oven working well in a certain situation may not be sufficient in another one, as the requirements can differ very much.

Access for a Laser Beam; Open vs. Sealed Ovens

In contrast to crystal ovens for non-optical applications, such as those for quartz crystals used as frequency standards, ovens for optical crystals must allow access of some laser beam. Typically, a beam has to propagate through the crystal, i.e., it must enter the crystal on one side and exit on the other side. This necessity makes the oven design more difficult. There are in principle two different approaches:

A sealed oven may also be desirable if hygroscopic crystals (e.g., BBO) are used, or if the surroundings are not clean.

Access for the laser beam is generally more difficult to arrange if the crystal has to be used with an angle of incidence near Brewster's angle. It is then not possible to place the crystal in a longer oven, and consequently the crystal ends will be more exposed to air.

When the oven controller is turned on, or when the desired crystal temperature is changed, it will take some time until the oven has precisely reached the new temperature. The involved time delays are often substantially longer than desirable – in particular, when the oven temperature has to be scanned through some range. Various design details can be optimized to minimize the temperature settling time:

A good thermal contact to the crystal is particularly essential if high-power laser beams heat the crystal due to parasitic absorption.

The better the thermal insulation of an oven against the outside world is, the lower the required heater power to maintain its temperature. This also minimizes possible detrimental effects of the radiated heat or convecting hot air on other parts of the setup. On the other hand, a high thermal insulation leads to longer settling times. Therefore, a reasonable trade-off between power consumption (heating effect) and settling time has to be done.

Ideally, the outer dimension of an oven are small, such that full flexibility for the beam path is maintained. For example, some nonlinear crystals need to be placed within a bow-tie ring resonator, where the folding angles should small in order to avoid excessive astigmatism. One then requires beams which pass the crystal relatively closely.

Particularly when the oven and not the passing laser beam must be aligned, it is important to properly mount an oven. The mounts should be sufficiently rigid, but should not provide an uncontrolled additional path for heat losses. Note also that heating of the base plate may cause problems with thermal expansion.

For research purposes, it is often convenient to have an oven which allows one to insert crystals with different sizes. If only their length varies, this is often no problem; a shorter crystal simply doesn't fill the full length of the oven. It is more difficult to allow for versatility concerning the transverse dimensions without accepting other disadvantages, such as larger size, higher thermal capacity, less solid mounting, etc. Some well constructed adapters can be very helpful.

The materials used next to the crystal should be resistant against the applied laser radiation. Note that a crystal could easily be damaged if a misaligned laser beam hits these materials and evaporates or burns them. Therefore, robust materials such as ceramics or metals are preferred. They should also be kept clean to avoid that dirt or oils, for example, contaminate the crystal.

In some cases, a high electric voltage needs to be applied to electrodes on a crystal within an oven, for example in order to tune the resonance condition of an optical resonator (an enhancement cavity). Obviously, this requires the electrically insulating materials are used to mount the crystal. Also, an insulated high-voltage cable needs to be placed.

Details of the Temperature Controller

Simple temperature controllers for crystal ovens allow the user to manually set the desired temperature by turning a knob or pressing some keys (for digital devices). There is also a temperature display, usually of digital type. A temperature resolution of 0.1 K is usually sufficient, but not in all cases.

More advanced temperature controllers offer a digital interface for connection to a PC, for example. This allows one to set the temperature from the PC (possibly automatically via some software), and possibly to monitor the actual oven temperature. Some oven controllers provide a “ready” signal in TTL format once the set temperature has been reached.

As mentioned above, PI controllers are often used. The control parameters may be factory-set, if the controller is used only in conjunction with a specific oven model. Otherwise, it may be necessary that the user can adjust these parameters.

Some controllers allow one to limit the rate at which the crystal temperature is changed. This can be necessary to minimize the risk that sensitive dielectric coatings lose the contact with the crystal due to differing thermal expansion coefficients.

Avoiding the Use of a Crystal Oven

The use of a crystal oven in an optical setup introduces a variety of disadvantage, such as additional cost, power consumption and settling time. Therefore, it would often be desirable to avoid the use of an oven, i.e., to operate the crystal at room temperature. For some nonlinear frequency conversion applications, it is possible to find a phase-matching configuration which works at room temperature. In particular, critical phase matching with angle tuning is possible with various crystal materials. However, the involved spatial walk-off then prevents strong focusing, so that efficient conversion is possible only for higher optical powers.

Note that even for operation at room temperature, some temperature stabilization may be required. Here, however, one may use a simpler construction with a Peltier element. Compared with a high-temperature crystal oven, this allows for shorter temperature settling times and a substantially lower power consumption.

The RP Photonics Buyer's Guide contains 12 suppliers for crystal ovens. Among them: 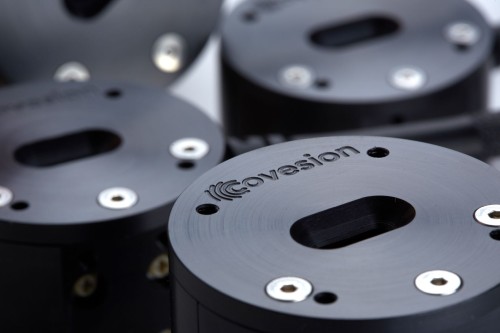 Our range of PPLN ovens are specifically designed to provide robust thermal management of PPLN crystals.

Our PPLN clips are easily mounted into the oven using the auto-locating pins. These also allow the PPLN clips to be swapped in and out with minimal realignment of the optical train. Finely sprung pins in the oven lid hold the PPLN crystal clip securely in place. The oven and PPLN crystal can then be mounted in any orientation, flexible to your choice of optical arrangement.

Ovens with factory preset temperature, as well as temperature controlled ovens with temperature tuning range up to 200 °C. Ideal solution for stabilization of crystal temperature at laboratory settings.

Recent Articles of the Photonics Spotlight:

You can receive such articles by subscribing to our Newsletters!