Diaphragms are circular (or approximately circular) openings, through which light can travel. They act as intentionally introduced optical apertures, e.g. in photographic objectives. Diaphragms may have a fixed opening diameter, but others have a variable opening diameter (iris diaphragms). Some of the latter can electrically controlled.

Typically, a diaphragm is quite thin, and its non-transparent parts are often absorbing, e.g. due to a black coating.

Diaphragms are also called stops, because they stop the light passage in some regions. If they limit the field of view of an instrument, they are called field stops. In other cases, they may act as aperture stops, reducing the amount of light getting through a system.

The role of a diaphragm in an imaging system is explained in the article on imaging with a lens.

In the simplest case, a diaphragm is a blackened metal plate with a circular hole. If it is small, it is also called a pinhole. There are also devices with a rotatable metallic plate, containing holes of different sizes, so that one can select between them by rotating the plate. Devices of that kind have been used in older photo cameras.

Blade diaphragms have an opening of variable diameter, limited by some number of blades, which can be moved more or less towards the center. There is often a mechanical mechanism, which allows one to move all blades in a coordinated manner e.g. by translating a single handle. The shape of the opening is a polygon, which more or less approximates a circle if the number of blades is large.

Some of those devices are motorized, so that they can be electrically controlled. For example, some modern photographic objectives contain such variable blades diaphragms, so that the microprocessor of the camera can automatically select f-number settings.

Some diaphragms are used in beam shutters. They may be optimized such that they can tolerate substantial optical powers.

The RP Photonics Buyer's Guide contains 4 suppliers for diaphragms. Among them: 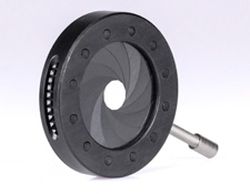 Edmund Optics offers a wide range of iris diaphragms. They are ideal for adapting imaging systems for a number of different applications or environments that would otherwise be too bright by limiting the amount of light in an area to manageable levels. Some diaphragms may be mounted directly onto imaging components or may be positioned separately in front of light sensors, offering multiple implementation choices. A selection of sizes as well as mounting accessories is also available for a range of versatile options. 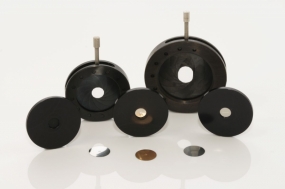 With an extensive range of diaphragms available from stock or as custom-made apertures, Knight Optical offers pinhole, slit and iris diaphragms (in stainless-steel and sprung steel leaves and in fully- and part-closing options). Delivering ultimate precision, pinhole and slit variants are offered in two grades; standard and high-powered.