The software RP Resonator also works with gratings. Find out e.g. the wavelength-dependent beam path in a single-pass configuration or within a laser resonator.

A diffraction grating is an optical device exploiting the phenomenon of diffraction, i.e., an kind of diffractive optics. It contains a periodic structure, which causes spatially varying optical amplitude and/or phase changes.

Details of Diffraction at a Grating

It is instructive to consider the spatial frequencies of the position-dependent phase changes caused by a grating. In the simplest case of a sinusoidal phase variation, there are only two non-vanishing spatial frequency components with ±2π / d, where d is the period of the grating structure.

An incident beam with an angle θ against the normal direction has a wave vector component k · sin θ along the plane of the grating, where k = 2π / λ and λ is the wavelength. Ordinary reflection (as would occur at a mirror) would lead to a reflected beam having the in-plane wave vector component −k · sin θ. Due to the grating's phase modulation, one can have additional reflected components with in-plane wave vector components −k · sin θ ± 2π / d. These correspond to the diffraction orders ±1. From this, one can derive the corresponding output beam angles against the normal direction:

If the grating's phase effect does not have a sinusoidal shape, one may have multiple diffraction orders m, and the output angles can be calculated from the following more general equation:

Note that different sign conventions may be used for the diffraction order, so that there may be a minus sign in front of that term.

The equations above may lead to values of sin θout with a modulus larger than 1; in that case, the corresponding diffraction order is not possible. Figure 1 shows an example, where the diffraction orders −1 to +3 are possible.

Figure 2 shows in an example case of a grating with 800 lines per millimeter, how the output angles vary with wavelength. For the zero-order output (pure reflection, m = 0), the angle is constant, whereas for the other orders it varies. The order m = 2, for example, is possible only for wavelengths below 560 nm.

In the so-called Littrow configuration of a reflection grating, the diffracted beam – most often the first-order beam – is going back along the incident beam. This implies the following condition:

The Littrow configuration is used, for example, when a grating acts as an end mirror of a linear laser resonator. A given grating orientation fixes a wavelength within the gain bandwidth of the laser medium for which the resonator beam path is closed, i.e., laser operation is possible. This technique is used for making wavelength-tunable lasers – for example, external-cavity diode lasers.

Distribution of the Output Power on the Diffraction Orders

Diffraction gratings can be optimized such that most of the power goes into a certain diffraction order, leading to a high diffraction efficiency for that order. This optimization leads to so-called blazed gratings (echelette gratings), where the position-dependent phase change is described by a sawtooth-like function (with linear increases followed by sudden steps). The slope of the corresponding surface profile must be optimized for the given conditions in terms of input angle and wavelength. In the Littrow configuration (see above), the shape is such that the linear parts of the structure are parallel to the wavefronts of the incident light.

Gratings can be fabricated with different methods:

It is also possible to fabricate a diffraction grating on a prism; the combination of a prism and a grating is sometimes called a “grism”. One may choose the parameters such that light at a certain center wavelength gets through the grism without any deflection.

Another possibility is to make a grating on top of a dielectric mirror structure, resulting in a reflecting grating mirror with very high diffraction efficiency [11].

Diffraction gratings can be distinguished from each other according to various aspects:

As explained above, the line density determines the angular positions (and even the existence) of the various diffraction orders. It may be limited by the used fabrication method, but can also be involved in design trade-offs.

Most used diffraction gratings only have dimensions of millimeters or a few centimeters, but it is also possible to fabricate very large gratings with dimensions of tens of centimeters or even more than one meter. A technical challenge is then to achieve a high uniformity over the whole grating area. Height uniformity is crucial for obtaining a high wavefront quality of diffracted beams.

For many applications, the diffraction efficiency is of high importance. This is the fraction of the incident optical power which is obtained in a certain diffraction order. It is often specified only for the desired diffraction order, not for the weaker unwanted orders. It depends not only on the grating itself, but also substantially on operation conditions such as the optical wavelength and the angle of incidence.

Generally, the diffraction efficiency is for the different orders can be polarization-dependent. This is particularly the case for reflection gratings, while transmission gratings often exhibit only a weak polarization dependence.

Generally, temperature changes result in changes of the line spacing, depending on the thermal expansion coefficients of the used materials. Different types of gratings can differ a lot in terms of thermal sensitivity.

Thermal sensitivity can particularly be a problem in applications involving high-power laser radiation, such as spectral beam combining.

The alignment of diffraction gratings is often highly sensitive, requiring precise fine mechanics and high mechanical stability. The alignment sensitivity does not only depend on the grating itself (e.g. its line density), but also on various operation conditions and the application. The minimization of alignment sensitivity is often an important aspect for the design of optical arrangements involving gratings.

Particularly for applications with pulsed lasers, it is important that gratings have a high enough optical damage threshold (see the article on laser-induced damage). Good power handling capabilities are tentatively in line with the requirement of low absorption losses, since only absorbed light has the potential for damaging a grating.

If the damage threshold in terms of optical fluence is not as high as desired, one may operate a grating with a correspondingly larger beam area. That approach, however, also hits limitations, such as limited availability or required compactness of an apparatus.

The handling of diffraction gratings – at least those with the grating near the surface – is usually relatively delicate. Grating surfaces are fairly sensitive e.g. against touching with hard objects or abrasive materials. It is thus also rather difficult to clean them; one should normally not try more than blowing off dust with clean, dry nitrogen or air. The deposition of any fat, oil or aerosol, for example, should be avoided wherever possible, because it may be impossible to remove such deposits without damaging the grating.

Diffraction gratings have many applications. In the following, some prominent examples are given:

Many diffraction gratings are used in grating monochromators and spectrometers, where the wavelength-dependent diffraction angles are exploited. Figure 4 shows a typical setup of a monochromator. Artifacts in the obtained spectra can arise from confusion of multiple diffraction orders, particularly if wide wavelength ranges are recorded.

Spectral separation can also be combined with imaging, as explained in the article on hyperspectral imaging.

Pairs of diffraction gratings can be used as dispersive elements without wavelength-dependent angular changes of the output. Figure 5 shows a Treacy compressor setup with four gratings, where all wavelength components are finally recombined [2]; it can be used for dispersive pulse compression, for example. The same function is achieved with a grating pair when the light is reflected back with a flat mirror. (Note that such a mirror may be slightly tilted such that the reflected light is slightly offset in the vertical direction and can be easily separated from the incident light.) Such grating setups are used as dispersive pulse stretchers and compressors, e.g. in the context of chirped pulse amplification. They can produce much larger amounts of chromatic dispersion than prism pairs, for example.

Diffraction gratings are often used for wavelength tuning of lasers. For example, gratings in Littrow configuration can be used in external-cavity diode lasers.

In spectral beam combining, one often uses a diffraction grating to combine radiation from various emitters at slightly different wavelengths into a single beam.

The RP Photonics Buyer's Guide contains 38 suppliers for diffraction gratings. Among them: 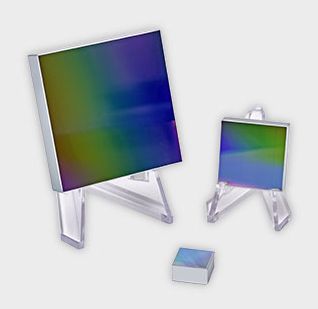 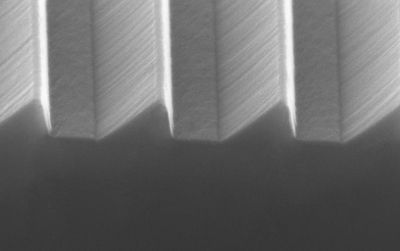 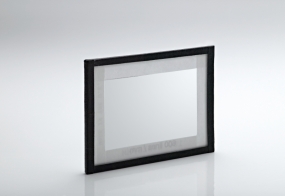 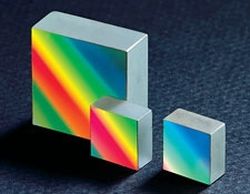 Edmund Optics offers a wide range of transmission and reflection gratings for the ultraviolet (UV), visible and infrared (IR) regions. This includes both ruled and holographic gratings. We also offer polarization gratings, transmission grating beamsplitters and other variants. 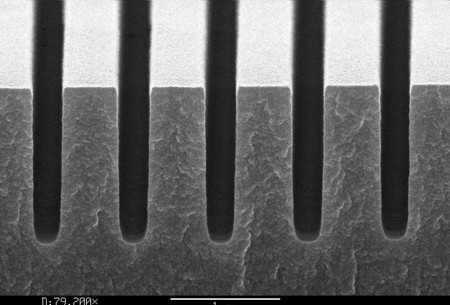 Holographix works closely with our customers to assist them in the development of custom grating-based solutions from concept to production. We produce both reflection gratings and transmission gratings using our proprietary UV replication technology. Blazed, binary, sinusoidal and slanted grating profiles are available options.