Lasers of DBR type are usually laser diodes, but the term is also sometimes used for fiber lasers containing fiber Bragg gratings. Both laser types are described below. Most solid-state bulk lasers actually also use laser mirrors which are Bragg mirrors; nevertheless such lasers are not called DBR lasers.

A DBR laser is different from a distributed feedback laser, where the whole active medium is embedded in a single distributed reflector structure.

A DBR laser diode contains some corrugated waveguide structure (a grating section) providing wavelength-dependent feedback to define the emission wavelength. Another section of the laser waveguide acts as the amplifying medium (active region), and the other end of the resonator may have another DBR.

DBR laser diodes are usually single-frequency lasers with diffraction-limited output, and often they are wavelength-tunable (→ tunable lasers). Tuning within the free spectral range of the laser resonator may be accomplished with a separate phase section, which can e.g. be electrically heated, or simply by varying the temperature of the gain region via the drive current. If the temperature of the whole device is varied, the wavelength response is significantly smaller than for an ordinary single-mode laser diode, since the reflection band of the grating is shifted less than the gain maximum. Electro-optic tuning can also be accomplished. Mode-hop free tuning over a larger wavelength region is possible by coordinated tuning of the Bragg grating and the gain structure.

There are more sophisticated device designs, exploiting a kind of Vernier effect with sampled gratings (SG-DBR laser), that offer a tuning range as wide as e.g. 40 nm, although not without mode hops.

The linewidth of a DBR diode is typically a few megahertz. Due to the relatively short laser resonator, it is larger than that e.g. of an external-cavity diode laser.

There are MOPA structures where an additional amplifier section (a semiconductor optical amplifier) is placed on the same semiconductor chip. The actual DBR laser is then the seed laser. Output powers well above 100 mW can be achieved with such devices. It is also possible to directly generate high powers (> 10 W) with a broad-area laser diode having a surface Bragg grating within its resonator [10]. The emission may then no longer be in a single mode, but still with a relatively small bandwidth.

A fiber laser of DBR type usually has a linear laser resonator formed by an active (rare-earth-doped) fiber between two fiber Bragg gratings. Compared with a fiber DFB laser, which consists of a single grating in a fiber with laser gain, a DBR fiber laser has a longer laser resonator and thus the potential for higher output power, higher power efficiency, and narrower linewidth. On the other hand, this can also lead to less robust single-frequency operation, or to multimode operation with a correspondingly much larger emission bandwidth. Single-frequency DBR fiber lasers offer similar output powers as DBR laser diodes: tens of milliwatts or sometimes > 100 mW.

Sampled grating designs, as described in the section on DBR laser diodes, can also be used in DBR fiber lasers. The tuning range achievable can again have a width of tens of nanometers.

Our distributed Bragg reflector (DBR) lasers have built-in resistors to allow for mode-hop-free tunability. These products are for sophisticated industry applications, e.g. fiber testing, and science, such as analytics, Raman spectroscopy, frequency conversion, and exciting certain atom resonances. eagleyard provides the largest variety of wavelengths available on the market. Find your suitable DBR laser product between 633 and 1083 nm with output powers from 10 to 150 mW. 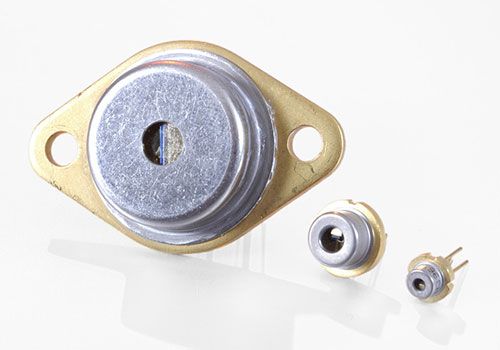 TOPTICA's distributed feedback (DFB) laser diodes feature a grating structure within the semiconductor and thus operate in both longitudinal and transverse single mode. Mode-hop free tuning is maintained over several hundred GHz. Tuning is achieved by modulating either the laser current or the chip temperature. Applications include alkaline spectroscopy, laser cooling, gas detection and the generation of tunable cw terahertz radiation.