A dye laser is a laser based on a dye (typically in a liquid solution) as the gain medium [1, 2]. Most laser dyes are based on organic molecules used in liquid form as solutions, although solid laser dyes and vapor dyes exist. A wide range of emission wavelengths from the ultraviolet to the near-infrared region can be addressed with different laser dyes. Typical characteristics of laser dyes as gain media are:

Many different dyes are nowadays available, and in total they can cover huge wavelength regions. One name like exalite, coumarin, rhodamine, pyrromethene, pyridine, fluorescein, pyridine or styryl can characterize a whole family of dyes with slightly different chemical structures, having somewhat different ranges of emission wavelengths and being distinguished with additional numbers. For example, one may use coumarin 2, 47, 102 or 153 for lasers in the blue to green spectral region.

Typical solvents for laser dyes are ethanol, p-dioxane and dimethylsulfoxide (DMSO). The used dye concentrations depend on the used pumping geometry and pump power; they are normally well below a gram per liter. The dyes can be purchased in powder form, such that the user can make the dye solution with any desired concentration.

Note that many laser dyes and some of the used solvents are poisonous and partly also carcinogenic. One should therefore carefully avoid to expose the skin to such a dye solution, or even to spill the dye by operating a not properly assembled dye circulating system. A particularly hazardous solvent, sometimes used for cyanide dyes, is dimethylsulfoxide (DMSO), which greatly accelerates the transport of dyes into the skin. (See also the article on laser safety.)

Dye lasers are normally pumped at relatively short wavelengths. Some typical options are:

Pulsed pumping allows the excitation of large volumes and thus the generation of pulses with high energies (sometimes of the order of 1 J).

Even for continuous pumping, the applied pump intensity is fairly high; for example, a few watts of pump power are focused to a beam waist with a radius of the order of 20 μm.

The laser resonator of a dye laser typically contains a dye jet or a dye cuvette (see below) as the laser gain medium. In addition, there are usually one or several frequency-selective elements, for example a birefringent tuner or a diffraction grating in Littrow configuration, which permits wavelength tuning in a range of tens of nanometers. Narrow-linewidth lasers contain additional frequency filtering components such as etalons, and often sophisticated computer-controlled tuning mechanics for precisely setting the wanted emission wavelengths. On the other hand, mode-locked lasers use only course wavelength control, as their emission bandwidth must be large. A stable linear polarization of the output is usually obtained as a side effect of the used tuning elements.

A frequently used kind of dye laser uses a thin dye jet [5] as the gain medium, so that the dye molecules are used only for a short time within the pump and laser beam and have a long time to recover before they are used again.

Alternatively, the dye can be pumped through a thin cuvette. Here, the dye is enclosed in some transparent material, and it is easier to obtain a steady flow. Obviously, the cuvette material (for example, quartz) must be resistant to the laser light and the pump light, and the cuvette surfaces must have a high optical quality.

Some time for recovery is often required due to the tendency of organic dye molecules to become trapped in triplet states, in which they cannot participate in the lasing process. An alternative way to lower the triplet concentration is to add a triplet quenching agent to the dye solution.

During operation, laser dyes tend to be chemically degraded. Therefore, the dye solution usually has to be exchanged after an operation time of 100 hours, for example. That lifetime depends on the dye used, on the pumping conditions, the volume of dye solution, etc.

Much of the original work on ultrashort pulse generation was done with dye lasers [6, 8, 9]. However, dye lasers suffer from significant disadvantages such as rapid degradation during operation, limited output power, and the need for pumping e.g. with green or blue light, making their pump sources expensive. Furthermore, dye lasers require the awkward handling of poisonous, often even carcinogenic materials.

For such reasons, solid-state lasers, in particular Ti:sapphire lasers and later on also fiber lasers, took most of the business from dye lasers (at least in the domain of ultrashort pulse generation) as soon as they were sufficiently developed. Dye lasers are still used in some areas, e.g. laser spectroscopy with wavelengths which are otherwise hard to generate. They are also particularly suitable for intracavity laser absorption spectroscopy.

There is some work on dye lasers based on solid media, e.g. with the dye in a polymer matrix. Obviously, the solid-state form has many advantages, particularly concerning handling. A problem, however, is the rapid degradation, either for a limited time by triplet excitation, or permanently by destruction of dye molecules. Some success has recently been achieved with rotating dye disk lasers [10].

The RP Photonics Buyer's Guide contains 18 suppliers for dye lasers. Among them: 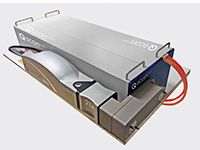 The Q-scan from Lumibird is a high resolution tunable nanosecond dye laser ranging from 200 nm to 4.5 µm. Dye cells are "plug & play" and non linear crystals are controlled via integrated look up tables for quick and easy scans.