An electro-optic modulator (EOM) (or electrooptic modulator) is a device which can be used for controlling the power (→ intensity modulators), phase (→ phase modulators) or polarization of light with an electrical control signal. It typically contains one or two Pockels cells, and possibly additional optical elements such as polarizers. Different types of Pockels cells are shown in Figure 1 and are described more in detail in the article on Pockels cells. The principle of operation is based on the linear electro-optic effect (also called the Pockels effect), i.e., the modification of the refractive index of a nonlinear crystal by an electric field in proportion to the field strength.

Most EOMs are operated with free-space laser beams, but there are also fiber-coupled modulators, where the Pockels cell is placed between two fiber collimators. Such devices typically have an insertion loss around 4 dB and can handle only limited power levels, e.g. 50 mW.

The voltage required for inducing a phase change of π is called the half-wave voltage (Vπ). For a Pockels cell, it is usually hundreds or even thousands of volts, so that a high-voltage amplifier is required. Suitable electronic circuits can switch such large voltages within a few nanoseconds, allowing the use of EOMs as fast optical switches. In other cases, a modulation with smaller voltages is sufficient, e.g. when only a small amplitude or phase modulation is required.

The simplest type of electro-optic modulator is a phase modulator containing only a Pockels cell, where an electric field (applied to the crystal via electrodes) changes the phase delay of a laser beam sent through the crystal. The polarization of the input beam often has to be aligned with one of the optical axes of the crystal, so that the polarization state is not changed.

Many applications require only a small (periodic or nonperiodic) phase modulation. For example, this is often the case when one uses an EOM for monitoring and stabilizing a resonance frequency of an optical resonator. Resonant modulators (see below) are often used when a periodic modulation is sufficient, and make possible a large modulation depth with a moderate drive voltage. The modulation depth can in some cases be so high that dozens of sidebands are generated in the optical spectrum (comb generators, frequency combs).

Note that an electro-optic modulator is not suitable for frequency modulation, or precisely speaking only for limited short-term frequency changes. For example, it could not be used to generate a constant change of optical frequency of an optical signal, since that would imply a linearly increasing phase delay (without any limit to the phase excursion).

Combined with other optical elements, in particular with polarizers, Pockels cells can be used for other kinds of modulation. In particular, an amplitude modulator (Figure 2) is based on a Pockels cell for modifying the polarization state and a polarizer for subsequently converting this into a change in transmitted optical amplitude and power.

An alternative technical approach is to use an electro-optic phase modulator in one arm of a Mach–Zehnder interferometer in order to obtain amplitude modulation. This principle is often used in integrated optics (for photonic integrated circuits), where the required phase stability is much more easily achieved than with bulk optical elements.

Optical switches are modulators where the transmission is either switched on or off, rather than varied gradually. Such a switch can be used, e.g., as a pulse picker, selecting certain pulses from a train of ultrashort pulses, or in cavity-dumped lasers (with an EOM as cavity dumper) and regenerative amplifiers.

In configurations where the induced relative phase change between two polarization directions is used, thermal influences can be disturbing. They result in a drift of the operation point, which may have to be compensated with an automatically adjusted bias voltage. Additional electronics may be used for such purposes, deriving the required bias voltage from some optical signals.

Some electro-optic modulators contain two matched Pockels cells in an athermal configuration where the temperature dependence of the relative phase shift is largely canceled. There are also configurations with four crystals of exactly the same length, canceling both birefringence effects and spatial walk-off. Various types of multi-crystal designs are used, depending on the material and the exact requirements.

For some applications, a purely sinusoidal modulation with constant frequency is required. In that case, it is often beneficial to use an electrically (not mechanically) resonant electro-optic modulator, containing a resonant LC circuit. The input voltage of the device can then be substantially lower than the voltage across the electrodes of the Pockels cell. A high ratio of these voltages requires a high Q factor of the LC circuit and reduces the bandwidth in which strong resonant enhancement can be achieved. The disadvantage of using a resonant device is that one loses flexibility: changing the resonance frequency requires the exchange of at least one electric component.

Broadband modulators are optimized for operation in a wide frequency range, which typically starts at zero frequency. A high modulation bandwidth typically requires a Pockels cell with a small electric capacitance, and excludes the exploitation of a resonance.

For particularly high modulation bandwidths e.g. in the gigahertz region, integrated optical traveling-wave modulators are often used. Here, the electric drive signal generates an electromagnetic wave (microwave) propagating along the electrodes in the direction of the optical beam. Ideally, the phase velocities of both waves are matched so that efficient modulation is possible even for frequencies which are so high that the electrode length corresponds to several wavelengths of the microwave.

A number of properties should be considered before purchasing an electro-optic modulator:

Note that a proper mechanical mount is also required, often with means to align the modulator precisely in various directions.

It is important to use an electronic driver which is both well matched to the EOM and suitable for the particular application. For example, different kinds of EOMs require different drive voltages, and the driver should also be designed for the given electrical capacitance of the EOM. Some drivers are suitable for a purely sinusoidal modulation, whereas broadband devices work in a large range of modulation frequencies. Many problems can be avoided by purchasing an electro-optic modulator together with the electronic driver from the same supplier, because the responsibility for the overall performance is then at one place.

Some typical applications of electro-optic modulators are:

The RP Photonics Buyer's Guide contains 42 suppliers for electro-optic modulators. Among them:

We produce KTP, KD*P and BBO Pockels cells for applications like Q-switching of lasers, pulse picking, laser cavity dumping and coupling laser pulses into and from regenerative amplifiers. Our Pockels cells can be supplied with mounting stages, drivers, power supplies and electronics for pulse picking. 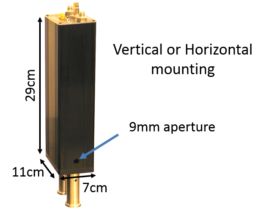 The KMLabs Eclipse is a high repetition rate, half wave Pockels cell and driver unit, designed for laser pulse picking at up to 20 kHz. The Eclipse has a minimum window of 10 ns, and about a 90% throughput between 750 nm and 850 nm. KMLabs' compact design allows the driver to be packaged in with the optical unit, thus minimizing the high voltage cable length, and thereby maximizing the switching speed. The high voltage source for the Eclipse is an external, 19”w x 13”d x 3.5”h unit.