For many applications, it is convenient to couple the output of a laser diode into an optical fiber in order to deliver the light to the place where it is needed. Fiber-coupled (also called fiber-integrated or fiber-pigtailed) diode lasers have several advantages:

The simplest case is that of a VCSEL (vertical cavity surface-emitting laser), which usually emits a beam with high beam quality, moderate beam divergence, no astigmatism, and a circular intensity profile. A simple spherical lens is sufficient for imaging the emitting spot to the core of a single-mode fiber. The coupling efficiency can be of the order of 70–80%. It is also possible to couple directly (butt couple) the fiber to the emitting surface of the VCSEL.

Small edge-emitting laser diodes also emit in a single spatial mode, thus in principle also allowing efficient coupling to a single-mode fiber. However, the coupling efficiency can be significantly degraded by the ellipticity of the beam, if a simple spherical lens is used. Also, the beam divergence is relatively high in at least one direction, requiring a lens with relatively high numerical aperture. Another problem is astigmatism of the diode output, particularly for gain-guided diodes; this may be compensated with an additional weak cylindrical lens. With output powers of up to a few hundred milliwatts, fiber-coupled gain-guided LDs can be used for, e.g., pumping erbium-doped fiber amplifiers.

Broad area laser diodes are spatially multimode in the long direction of the emitter. If a circular beam is simply shaped with a cylindrical lens (e.g. a fiber lens, see Figure 3) and then launched into a multimode fiber, a lot of the brightness (radiance) will be lost, because the high beam quality in the fast axis direction can not be utilized. A power of e.g. 1 W can be launched into a multimode fiber with a 50-μm core diameter and a numerical aperture (NA) of 0.12. This is sufficient e.g. for pumping a low-power bulk laser, e.g. a microchip laser. Even a launched power of 10 W is possible.

An improved technique for broad-area lasers is based on reshaping the beam for a symmetrized beam quality (and not only symmetrized beam radius) before launching. That allows for a higher brightness.

For diode bars (diode arrays), the problem of asymmetric beam quality is even more severe. Here, the outputs of individual emitters may be coupled into separate fibers of a fiber bundle. The fibers are arranged in a linear array on the side of the diode bar, but as a circular array on the output end. Alternatively, some kind of beam shaper for symmetrizing the beam quality may be used before launching into a single multimode fiber. This can be done e.g. with a two-mirror beam shaper or with some microoptical elements. It is possible e.g. to couple 30 W into a fiber with 200-μm (or even 100-μm) core diameter and an NA of 0.22. Such a device can be used for, e.g., pumping an Nd:YAG or Nd:YVO4 laser with roughly 15 W of output power.

For diode stacks, fibers with still larger core diameters are used. It is possible e.g. to couple hundreds of watts (or even several kilowatts) of optical power into a fiber with a 600-μm core diameter and NA = 0.22.

Some potential disadvantages of fiber-coupled diode lasers, compared with free-space emitting lasers, are:

One may also not obtain a fiber-coupled laser diode product for each optical wavelength.

Beam Quality of the Fiber Output

The beam quality of the fiber output is often not specified; in many cases, only the fiber core diameter and the numerical aperture (NA) are known, and a step-index multimode fiber is assumed. There is no equation to calculate exactly the beam quality in that case, because it depends on the distribution of optical power over the fiber modes, and this distribution itself depends on the launching conditions. However, the beam quality M2 factor can be roughly estimated, assuming that the power is well distributed over the modes, so that the numerical aperture represents a reasonable (perhaps slightly too high) estimate for the actual beam divergence. This leads to the equation

where a is the fiber core radius (i.e., half the core diameter). If the light is launched mostly in lower-order guided fiber modes, the beam quality can also be substantially better, but may then be degraded by strong bending of the fiber.

The RP Photonics Buyer's Guide contains 76 suppliers for fiber-coupled diode lasers. Among them: 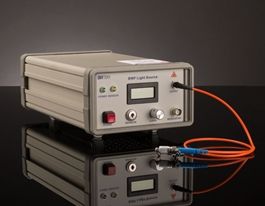 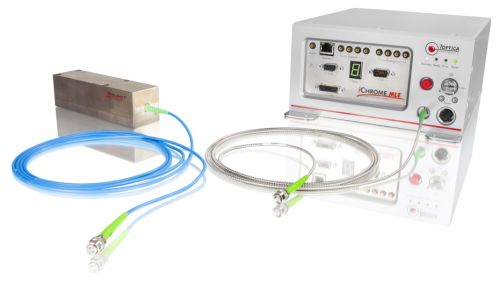 While all of Toptica's diode lasers can be combined with Toptica's versatile fiber launch FiberDock™, we also offer dedicated, permanently fiber-coupled systems.

The iBeam-smart-PT as well as the Multi-Laser Engine iChrome xLE cover the range from 375–785 nm and provide a single-mode polarization maintaining fiber delivery.

The first video explains why the RP Photonics website is extremely popular among photonics professionals:

The second video explains how you can utilize the RP Photonics website for your marketing strategy: