The software RP Fiber Power can be used for analyzing and optimizing evanescent fiber couplers. As an example, see a case study.

Fiber couplers belong to the basic components of many fiber-optic setups. Note that the term fiber coupler is used with two different meanings:

This article treats fiber couplers of the first type, coupling light from fibers to fibers. Such couplers can be fabricated in different ways:

Figure 2 shows a numerical beam propagation simulation for a fiber coupler based of the first type as explained above. Here, the light distribution oscillates between the two fiber cores, and finally the larger part of the power remains in the original (upper) fiber. For light with other wavelengths, however, the coupling can be very different. Therefore, such couplers work only in a limited optical bandwidth. They can be used as dichroic couplers or beam combiners, for example for separating or combining two wavelength components (such as pump and signal light in a fiber amplifier).

Fiber couplers are usually directional couplers, which means that essentially no optical power sent into some input port can go back into one of the input ports. There is often a specification of return loss, which indicates how much weaker the back-reflected light is, compared with the input.

If all fibers involved are single-mode (i.e., support only a single mode per polarization direction for a given wavelength), there are certain physical restrictions on the performance of the coupler. In particular, it is not possible to combine two or more inputs of the same optical frequency into a single-polarization output without significant excess losses, except if the optical phases of the input beams are precisely adjusted and stabilized. That means that the two inputs to be combined would have to be mutually coherent.

However, such a restriction does not occur for different input wavelengths: there are couplers which can combine two inputs at different wavelengths into one output without exhibiting significant losses. Such dichroic couplers are used in fiber amplifiers to combine the signal input and the pump wave. Their insertion loss may be very small (e.g. far below 1 dB) for both inputs. Other wavelength-sensitive couplers are used as multiplexers in wavelength division multiplexing (WDM) telecom systems to combine several input channels with different wavelengths, or to separate channels.

Multimode fiber combiners allow the powers of two mutually incoherent beams to be combined without a power loss. However, this will cause some loss of brightness.

Most types of couplers work only in a limited range of wavelength (a limited bandwidth), since the coupling strength is wavelength-dependent (and often also polarization-dependent). This is a typical property of those couplers where the coupling occurs over a certain length. Typical bandwidths of fused couplers are a few tens of nanometers. As mentioned above, they can be used as dichroic couplers or beam combiners. They are sometimes also called WDM couplers (→ wavelength division multiplexing).

Some typical applications of fiber couplers are:

The RP Photonics Buyer's Guide contains 91 suppliers for fiber couplers. Among them:

TOPTICA´s COOL patent pending fiber coupling concept is new, because it does not use any mechanical micro adjustable parts, which normally are the first to move due to thermal or mechanical influences.All major optical components are solidly mounted and the optical micro alignment is unsusceptible to mechanical and thermal distortions or translations. 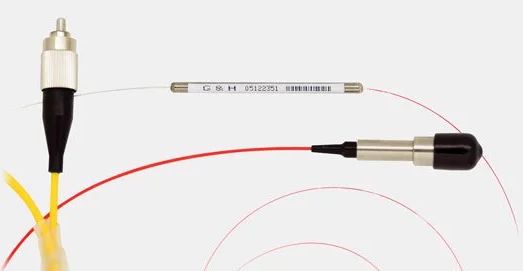 The G&H line of HI REL fused fiber optic components are deployed in environments such as undersea and space where the costs of component replacement are prohibitive and reliability is of premier concern.

G&H is established as a preferred supplier of these components to most major undersea telecommunications equipment manufacturers. Our HI REL capability is built upon the foundation of an extended history of also manufacturing very reliable components for land-based (or terrestrial) systems in volume.