The term fluorescence spectrometry is sometimes used instead of spectroscopy in order to emphasize that certain quantities are measured in a quantitative manner.

In contrast to absorption spectroscopy, one usually does not measure what happens to the applied excitation light (e.g. its absorbance), but observes only the properties of the fluorescent emission.

Fluorescence is actively excited by irradiating a sample with light from some light source which is part of the fluorometer (or fluorimeter). (In many cases, one uses ultraviolet light.) Further, there is some kind of photodetector, which may be combined with a tunable monochromator (or sometimes only a few simple optical filters) for spectral analysis. Figure 2 shows an example for a fluorometer setup.

Some fluorophore in the sample usually absorbs the incident excitation light via linear absorption (with one photon per absorption process), but there are also cases where nonlinear absorption at high optical intensities is utilized, for example two-photon absorption or even multiphoton absorption, i.e., with two or more photons per excitation process. The absorption causes the excitation of atoms, ions or molecules to certain excited electronic states. Frequently, the excited objects first undergo some non-radiative transitions to lower excited states (see Figure 1). Finally, with some probability there will be emission of a photon from the excited state either to the electronic ground state or to another excited state, in the latter case with a correspondingly reduced photon energy and possibly followed by the emission of one or more additional photons. There are also cases with resonance fluorescence, which do not involve additional electronic transitions, and the emission wavelengths are close to the excitation wavelength. Part of the fluorescence may be quenched.

In free molecules, for example in gas spectroscopy, the involved excited states can involve vibrational and rotational states. In case of solid materials, interactions with neighbored atoms can substantially modify the produced fluorescence. Similarly, there are solvent interactions in liquids.

Some kind of samples contain natural kinds of fluorophores, which can be parts of certain larger molecules or separate fluorescent molecules. For example, tyrosine and tryptophan occur in biological samples. In other cases, one adds a fluorophore in the form of some fluorescent dye (frequently aromatic compounds such as fluorescein), which can help to reveal certain properties of the sample. For example, certain dyes preferentially get attached to certain structures and can therefore act as markers for those. Such methods are particularly used in fluorescence microscopy e.g. for biological research, where certain structures within biological cells can be marked.

The excitation light can be a continuous-wave source or a pulsed source:

Instruments for fluorescence spectroscopy can be called spectrofluorometers. (There are also simpler fluorometers or fluorimeters without spectral resolution.) Apart from high-performance instruments for use in laboratories, there are also more compact ones, even in the form of handheld battery-powered devices.

The excitation and/or the light detection may be restricted to a small volume on the sample. Fluorescence spectroscopy measured with a high spatial resolution can be called fluorescence microscopy.

Depending on the chosen method, different kinds of light sources can be used for fluorescence spectroscopy:

If the used light source cannot produce light with a precisely constant optical power or pulse energy, one may also measure its output with an additional photodetector and use its output signal to eliminate power fluctuations from the results of the fluorescence measurements.

Different kinds of photodetectors can be used, depending on the requirements. For instruments with continuous-wave excitation and a scanning monochromator, one simply requires a photodetector with high sensitivity in the relevant spectral range – for example, some type of photodiode. In conjunction with a dual monochromator for optimum suppression of stray light, one requires a tentatively even higher detector sensitivity.

For fluorescence lifetime measurements, one requires a fast response (high bandwidth) in addition to the high sensitivity. This narrows the choice of suitable detectors; one often uses photomultipliers or avalanche photodiodes. There are also devices containing a microchannel plate.

For efficient light collection from the sample e.g. to the input slit of a monochromator, one can use a cylindrical lens.

The obtained fluorescence spectra may be modified by further interactions within the sample, for example by wavelength-dependent absorption. Such effects can be minimized by using thin samples.

In addition to fluorescence light, there may also be light arising from Raman scattering, which also exhibits some Stokes shift.

In some cases, the ultraviolet excitation light causes degradation (e.g. by photodecomposition) of the sample. Highly sensitive detection is then particularly desirable, since it allows one to reduce the exposure time.

Sometimes, one needs to monitor not only the amount of fluorescence from a certain fluorophore, but precisely detect minor changes of the emission spectrum, for example due to subtle interactions in the sample. A particularly high spectral resolution and low detection noise may be required in such cases.

Fluorescence spectroscopy is often used in chemistry, biology and environmental monitoring. Some examples:

Time-resolved fluorescence spectroscopy can be used to gain substantial additional information and is thus interesting for certain areas of fundamental scientific research.

The RP Photonics Buyer's Guide contains 14 suppliers for fluorescence spectroscopy equipment. Among them: 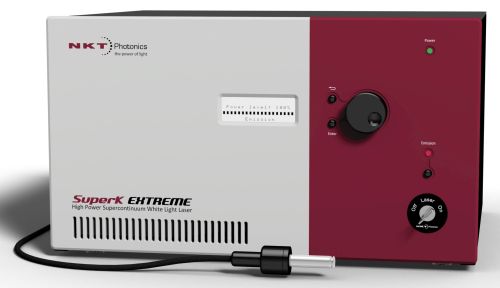 Our supercontinuum lasers with built-in pulse picker in combination with our tunable SuperK VARIA filter is an extremely useful excitation source for time-resolved spectroscopy experiments. With its broad range it replaces solutions based on combining several lasers. It also eliminates time-consuming hardware modifications and alignments that would normally be required while switching excitation sources. The pulse picker can reduce the repetition rate to secure enough time for the photo-excited materials to reach their ground state before the next photoexcitation-fluorescence cycle is initiated.