Frequency-resolved optical gating [1, 3] is a technique for the “complete” characterization of ultrashort pulses, i.e. for measuring not only pulse parameters such as the pulse energy or pulse duration, but also the full time-dependent electric field or (equivalently) the optical spectrum including the frequency-dependent spectral phase. (The carrier–envelope offset and the arrival time of pulses can not be measured.) This technique has been pioneered by Rick Trebino's research group at the Georgia Institute of Technology.

A typical setup for a FROG measurement (Figure 1) is similar to that of an intensity autocorrelator, except that the photodetector is replaced with a spectrograph. A FROG measurement involves recording some tens or hundreds of spectra for different settings of the arrival time difference of the two pulses. These data can be illustrated in the form of a so-called FROG trace (see Figure 2), which is a kind of spectrogram and displays with a color scale the intensity as a function of time delay and optical frequency (or wavelength).

A sophisticated iterative phase retrieval algorithm, implemented as a computer program, can then be used for reconstructing the pulse shape from the FROG trace. As the recorded data are substantially redundant, the FROG retrieval algorithm can not only deliver the pulse shape, but also carry out a consistency check. It may thus be noticed when errors occur, e.g. due to wrong calibration of the spectrometer. On a typical PC, the procedure may take a few minutes with a non-optimized algorithm, and optimized algorithms have been developed which make it possible to do the calculations in less than 0.1 s, at least for simply shaped pulses.

The term “frequency-resolved optical gating” originates from the idea that a short gate pulse can be used to obtain a sample from a longer pulse by nonlinear mixing (gating) in a nonlinear crystal material. As an additional gate pulse, shorter than the pulse to be investigated, is usually not available, FROG actually uses the pulse itself for gating. This makes the method much simpler to apply, but at the same time conceptually and computationally more sophisticated.

Beyond these traditional FROG measurement methods, refined versions of FROG have been developed, which can be applied even to very short pulses (with angle dithering of the crystal to remove strong effects of group velocity mismatch in the nonlinear crystal) or to fairly long pulses (where a high spectrometer resolution is required). A particularly compact setup is achieved with the GRENOUILLE geometry [9], which has no moving parts and even allows the measurement of additional features such as spatial chirps. A waveguide as the nonlinear component allows detection at ultralow power levels, and polarization scrambling makes possible polarization-independent measurements, which facilitate e.g. the delivery of pulses via fibers [13]. 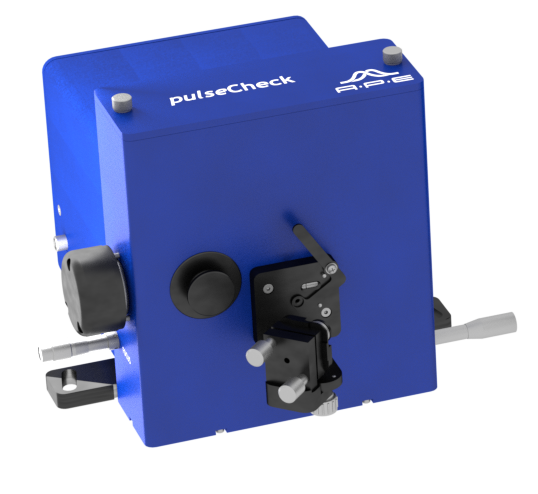 Second Harmonic Generation FROG is the most popular spectrometer-less Frequency-Resolved Optical Gating method. Most of the pulseCheck autocorrelators by APE optionally integrate FROG and give access to complete pulse characterization. The addition of a special nonlinear crystal module and dedicated software opens the door to complete spectral and temporal pulse characterization. The FROG Option enables the pulseCheck to measure the spectral and temporal bandwidth and phase with just a few adjustments to the autocorrelator. 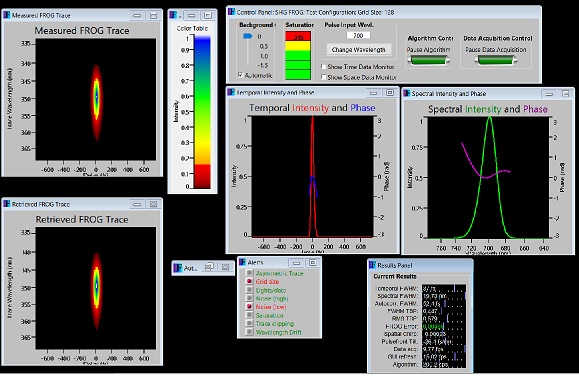 Frequency-Resolved Optical Gating (FROG) is the gold standard of laser pulse measurement. It yields the complete intensity and phase vs. time for an arbitrary pulse. GRENOUILLE is a simple, elegant version of FROG.

This website is enormously popular. The page views of the encyclopedia and the buyer's guide in the last 12 months:

See also our detailed published data. They are no surprise in the light of the extraordinary Google ranking.

Obviously, it would be a good idea to advertise your photonics products on this site – with enhanced entries in the buyer's guide and with banners at this place here.