A variety of lasers is based on gases as gain media. The laser-active entities are either single atoms or molecules, and are often used in a mixture with other substances having auxiliary functions. A population inversion as the prerequisite for gain via stimulated emission is in most cases achieved by pumping the gas with an electric discharge, but there are also gas lasers using a chemical reaction, optically pumped devices, and Raman lasers. During operation, the gas is often in the state of a plasma, containing a significant concentration of electrically charged particles.

Most gas lasers emit with a high beam quality, often close to diffraction-limited, since the gas introduces only weak optical distortions, despite considerable temperature gradients. Their operation usually requires a high-voltage supply, often with a high electrical power. Some high-power gas lasers use a system for quickly circulating the gas (forced convection, fast flow).

Copper vapor lasers are excited with intense current pulses and generate nanosecond pulses at 510.6 nm (green) or 578.2 nm (yellow). The average output power can exceed 100 W. Helium–cadmium lasers are more similar to helium–neon lasers, emitting continuously at 442 nm (blue) or 325 nm (ultraviolet), with optical powers of the order of 100 mW. The laser transition occurs in Cd+ ions, which become excited in collisions with excited helium atoms. - There are alkali vapor lasers, using e.g. a cesium or rubidium cell in an oven as the gain medium. Such lasers can be pumped with laser diodes. The power efficiency can be fairly high; note that the quantum defect can be small for a typical pumping scheme where one pumps from the ground state 6S1/2 to 6P3/2 and uses a transfer via a buffer gas (e.g. ethane) to the nearby 6P1/2 as the upper laser level. At the same time, the beam quality can be much higher than that of the pump source, so that such a laser acts as an efficient brightness converter. - Chemical lasers convert chemical energy of gases into laser light (typically in the mid- or near-infrared region) with powers up to the megawatt level. There are e.g. hydrogen-fluoride (HF) lasers, fueled with H2 and F2, which is converted to HF, and oxygen-iodine lasers (COIL). Chemical lasers are mainly studied for military purposes, e.g. as anti-missile weapons, to be operated even on board large airplanes. - Raman gas lasers are Raman lasers, based on optical amplification via stimulated Raman scattering rather than on stimulated emission of excited ions. They can e.g. use a hydrogen cell, and need to be optically pumped.

Gas lasers can also be grouped according to the nature of their laser-active species:

Many gas lasers have self-terminating laser transitions, where the lower state has a long lifetime. Lasing stops once the lower-state population becomes too high. Examples for such gas lasers are nitrogen lasers and copper vapor lasers. Excimer lasers can also only be operated in pulsed mode, although for different reasons [3].

A primary reason for using certain gas lasers instead of solid-state lasers is that they offer special wavelengths, which are otherwise difficult to obtain. Another interesting aspect is that relatively high optical powers can be obtained with gas lasers; compared to solid-state lasers, particularly diode-pumped ones, the price depends less strongly on the required output power level. A good example for both aspects is the carbon dioxide laser, which is quite a unique long-wavelength source with high output power. Similarly, excimer lasers provide high powers in the ultraviolet spectral region.

The helium–neon laser has been widely used for the generation of red laser light, but is now increasingly replaced by cheaper and more compact laser diodes. Similarly, argon ion lasers were often used for pumping titanium–sapphire lasers, but are now often replaced by frequency-doubled solid-state lasers.

The RP Photonics Buyer's Guide contains 42 suppliers for gas lasers. Among them: 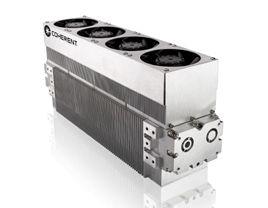