List of suppliers for
high-power fiber lasers and amplifiers

The software RP Fiber Power can be used for analyzing and optimizing high-power fiber devices based on double-clad fibers.

Whereas the first fiber lasers could deliver only a few milliwatts of output power, there have subsequently been rapid developments which have lead to high-power fiber lasers and particularly amplifiers with output powers of tens or hundreds of watts, sometimes even several kilowatts from a single fiber. This potential arises from a very high surface-to-volume ratio (avoiding excessive heating) and the guiding (waveguide) effect, which avoids thermo-optical problems even under conditions of significant heating.

High-power fiber lasers and fiber amplifiers are nearly always realized with rare-earth-doped double-clad fibers, which are pumped with fiber-coupled high-power diode bars or other kinds of laser diodes. The pump light is launched into an inner cladding rather than into the (much smaller) fiber core, in which the laser light is generated. The laser light can have very good beam quality – even diffraction-limited beam quality if the fiber has a single-mode core. Therefore, the brightness of the fiber laser output can be orders of magnitude higher than that of the pump light, even though the output power is of course somewhat smaller. Double-clad fiber lasers can thus effectively be used as brightness converters. Typical optical-to-optical power efficiencies are above 50%, sometimes even above 80%; the overall electrical-to-optical power conversion efficiency of a diode-pumped fiber laser can be of the order of 50% for an Yb-based fiber laser pumped with efficient high-power diode lasers.

For the highest powers, the core area needs to be fairly large (→ large mode area fibers), because the optical intensities would otherwise become too high, and often also because a double-clad fiber with a large ratio of cladding to core area has a weak pump absorption. For core areas up to the order of a few thousand μm2, it is feasible to have a single-mode core. Larger mode areas with still fairly good output beam quality are possible with a slightly multimode core, where most of the light propagates in the fundamental mode. (The excitation of higher-order fiber modes can be suppressed to some extent e.g. by coiling the fiber, except if one obtains strong mode coupling at high power levels [14].) For even larger mode areas, the beam quality can no longer be nearly diffraction-limited, but it can still be fairly good compared with, e.g., rod lasers operating at similar power levels.

There are several options for launching pump light at very high power levels. The simplest is to launch directly into the pump cladding at one or both fiber ends (see Figure 2). This technique does not require special fiber components; however, it needs the propagation of the high-power pump radiation through air (with free-space optics) and particularly through an air–glass interface, which is then very sensitive to dust and misalignment. In many cases, it is therefore preferable to use one of several techniques where one employs fiber-coupled pump diodes and keeps the pump light in fibers from there on (see Figure 3). One option is to launch the pump light into passive (undoped) fibers which are wound around the active fiber so that the light is gradually transferred into the active fiber (GTWave fiber). Other techniques are based on special pump combiner devices (fiber-optic pump combiners), where several pump fibers and a single active signal fiber are fused together. Yet other approaches are based on side-pumped fiber coils (fiber disk lasers) [3], or on grooves in the pump cladding through which pump light can be injected. The latter technique allows for multi-point pump injection and thus for a better distribution of the heat load.

A comparison of all the different pump launching techniques is complex, since it involves many aspects: not only the transfer efficiency, but also the loss of brightness, the ease of manufacturing, the flexibility of handling, possible back-reflections, leakage of light from the fiber core back to the pump source, the option to maintain the polarization, etc.

The conceptually simplest option for generating high-power laser light is to build a fiber laser directly with some kind of mirrors on both ends. However, high-power fiber devices are very often built as laser-amplifier combinations, i.e., with a MOFA (master oscillator fiber amplifier) architecture. This concept has several advantages. It is easier to control the emission properties of a lower-power seed laser in terms of linewidth, laser noise, wavelength tunability, pulse generation, etc. Also, the fiber of an amplifier has to stand only a power about equal to the output power, whereas in a laser the intracavity power is higher (even though fiber lasers as high-gain devices allow for strong output coupling). Furthermore, it can be advantageous to use a modular design approach, where amplifier stages can be combined as required. In many cases, particularly when a low-power seed laser is used, one even uses several amplifier stages, typically with increasing mode areas and pump powers along the chain.

Many high-power lasers for material processing are Q-switched lasers, generating intense nanosecond pulses. In this regime, fiber devices are limited mainly in terms of peak power: apart from various nonlinearities, self-focusing introduces a hard limit at a few megawatts of peak power, which notably cannot be increased by using larger mode areas. Actually achieved peak powers are usually below 1 MW, even for large mode area fibers. This means that, e.g., pulse energies are limited to a few millijoules if the pulse duration is one nanosecond.

On the other hand, the high gain of fiber devices allows the realization of very flexible MOPA devices with a gain-switched laser diode as seed laser. This approach, unlike Q switching of a laser, allows one, e.g., to modify the pulse duration independently of the pulse repetition rate.

The large gain bandwidth of fiber amplifiers allows for the amplification of ultrashort pulses. However, particularly in this regime significant challenges arise from the strong fiber nonlinearity, because high-energy femtosecond pulses have huge peak powers. In addition to the risk of fiber damage, strong nonlinear distortions can result from the fiber nonlinearity, and the high level of chromatic dispersion (including higher-order dispersion) can also be problematic. Particularly if pulse quality matters, these matters need to be carefully considered.

One possible approach is to make fiber-based chirped-pulse amplification systems, where the pulse duration within the amplifier is strongly increased, so that the effect of nonlinearities is accordingly decreased. An alternative to this approach is the amplification of parabolic pulses, where up-chirped pulses experiencing the gain and nonlinearity of the amplifier fiber evolve in a self-similar fashion, and their close to linear chirp makes it possible to obtain a high pulse quality with dispersive compression.

Although the mentioned techniques have allowed for extraordinary performance of fiber-based high-power ultrashort pulse sources (at least for multi-megahertz pulse repetition rates and correspondingly moderate pulse energies), these achievements are usually based on setups which involve a lot of free-space optics and hence lose many of the advantages of fiber systems. An interesting direction is the development of all-fiber ultrashort pulse sources, possibly allowing for a final free-space pulse compressor (e.g. a transmission grating), but eliminating the need to launch pulses from free space into a fiber.

Even though the progress in the development of high-power fiber devices has been tremendous in recent years, various kinds of more or less severe limitations are now encountered, which are expected to slow this progress:

Due to such limitations, high-power fiber devices can – contrary to common opinions – usually not be considered as power-scalable in a strict sense, at least not well beyond the already achieved performance level. (Previous advances have also largely not been achieved with simple power scaling, but with improved fiber designs and pump diodes.) This has important consequences e.g. when fiber laser technology is compared with that of thin-disk lasers. The article on power scaling of lasers discusses this in more detail.

Of course, even without true power scalability, a lot can be done to improve various kinds of high-power fiber devices. An important issue is the further development of advanced fiber designs, e.g. with very large mode areas and single-mode guidance, as often realized with photonic crystal fibers. Various kinds of fiber devices are also important, e.g. special pump couplers, tapers for connecting fibers with different mode sizes and special cooling arrangements. Once the limit of the power per fiber has been reached, beam combining will be a further option – fiber devices appear suitable for this technique. Also for ultrashort pulse amplifier systems there are various interesting options to mitigate and partially even to exploit the fiber nonlinearity, e.g. for further spectral broadening and subsequent pulse compression.

The RP Photonics Buyer's Guide contains 28 suppliers for high-power fiber lasers and amplifiers. Among them: 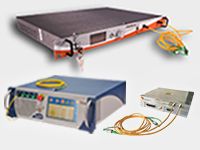 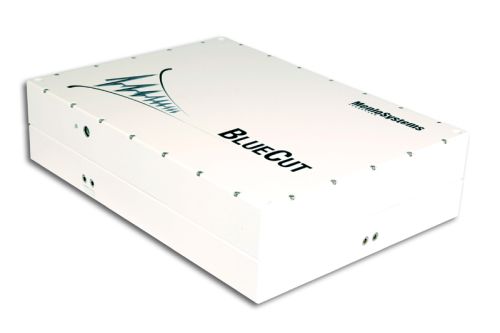 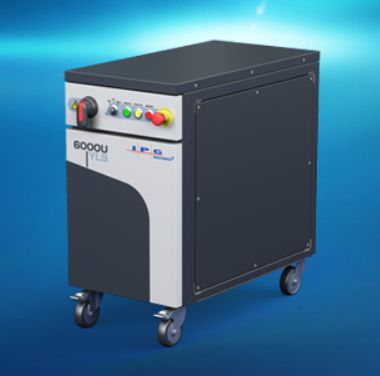 High power kilowatt-class fiber laser sources are available from one to hundreds of kilowatts average power. Housed in rugged cabinets, these systems are designed to operate in industrial manufacturing environments. A variety of beam delivery and process head options provide the ultimate flexibility in optimizing one laser for many different applications. IPG high power industrial fiber lasers are recognized as reliable and productive tools in demanding industries such as automotive, aerospace and oil & gas.

RPMC Lasers offers a variety pulsed and CW fiber lasers and fiber amplifiers with wavelengths between 1.0 and 1.5 microns. These fiber lasers can be configured in an OEM or turnkey system, with pulsed versions available from 500 ps up to 30 ns with rep rates from 10 kHz up to MHz.

Applications include material processing, LIDAR, micromachining, and other others.