Holography is a class of methods for recording and reconstructing three-dimensional images, which are based on interference phenomena. Holographic images are called holograms. Unlike normal photographic images, they do not use a mapping of individual objects points to individual points in the hologram; in that sense, they are not images. Instead, light from each image point affects the whole hologram, and each point of a holographic recording affects each reconstructed image detail. The reconstruction of visible images is possible only under certain circumstances, e.g. illumination with laser light coming from a certain direction.

There are also holograms which are generated not by recording light fields from real objects, but with computer-based methods – just as photograph-type images may be artificially made, e.g. via computer graphics.

The Nobel Prize 1971 in Physics was awarded to Dennis Gabor for his invention and development of holographic methods; his first demonstration was done in 1947.

The basic operation principles of holography are explained in the following.

We first consider a situation where two mutually coherent collimated monochromatic laser beams coming from different directions are superimposed in some transparent medium. Let us assume that a first beam comes from the left side and a second one from the top right of the following diagram:

The second beam will typically be generated from the other beam, using a beam splitter and two mirrors, for example.

Where the beams are superimposed, an interference pattern arises. The orientation of that pattern depends on the direction of the two beams. The oscillating intensity pattern can be described with a vector which is obtained as the difference between the wave vectors of the two beams. Its magnitude determines how rapid the oscillation is, and its direction is perpendicular to the points of constant intensity.

Now imagine that the interference pattern is somehow burned into the medium, so that a holographic grating is formed. There are different physical mechanisms which can lead to such effects. For example, the medium may contain light-sensitive particles as in a photographic film, so that the illuminated parts become light-absorbing after some development process. Other physical mechanisms (e.g. in photorefractive media) can lead to changes of the refractive index, thus to phase gratings in the medium. In the simple considered situation, we obtain a volume Bragg grating.

Once the medium has such a holographic grating inside, it becomes reflective for laser beams with the correct angular orientation and wavelength. For example, if we now only take the first laser beam (coming from the left side), part of its optical power will be reflected (more precisely, diffracted) in the lower left direction – without the other laser beam coming from the top right. So for an observer near the bottom the situation looks similar as before, where he could see only the beam coming from the top.

Of course, the same mechanism will work for other directions of the second beam. The orientation of the recorded holographic grating will change accordingly, so that the reflected beam obtained with the single incoming beam only will always have the appropriate outgoing direction.

We can do that also with two different beams coming from the top simultaneously with different directions:

The interference pattern now becomes more complicated. Assuming that the local changes of absorption or refractive index are proportional to the optical intensity during the recording, the resulting grating will reflect light in two different directions when only the first beam is applied.

Similarly, the operation principle would work for divergent or convergent beams.

Finally, we can replace one of the mirrors for the second beam with some object (e.g. a human face). Instead of simply a reflected beam, we will then obtain a far more complicated spatial distribution of scattered light, propagating in a wide range of different directions. Some of that light (the object beam – actually not a collimated beam any more) will get into the medium where it can be superimposed with the first beam (called the reference beam), and it will again interfere with it: its spatial coherence is generally lost, but not its temporal coherence, assuming that the object is not moving.

The holographic image has a three-dimensional appearance, because it gives the observer certain depth perception cues. This is because the whole light field, which was initially scattered by the object, is reconstructed. For example, the observer may move around in order to see the object from different perspectives, perhaps even looking behind an object located in the front. In contrast, an ordinary two-dimensional photograph can only present the view for one given perspective chosen in the recording. Obviously, a hologram can contain far more information on an object or scene than a 2D image.

The principle has been explained with volume holograms. It is also possible, however, to work with a thin hologram, having a sufficiently strong index or absorption modulation within a thin layer.

The recording of a hologram as explained above can work only under appropriate circumstances. A crucial condition is that a stable interference pattern is generated and can be recorded with sufficient accuracy. This has the following consequences:

The volume hologram recorded as explained above requires a narrow-linewidth laser for reconstruction. It will of course appear only in the color of that laser, not as a full-color image.

There are transmission and reflection holograms for observation either via transmitted or reflected light. As mentioned above, some are volume holograms, while some applications require thin holograms. As also mentioned, holograms can be recorded as amplitude or phase gratings.

There are various methods for generating holograms not as original recordings, but as copies of one recording or as computer-generated images. For example, thin phase holograms can be fabricated by forming precisely controlled surface relief patterns on thermoplastic substrates, using precision embossing techniques.

There are rainbow holograms which can be reconstructed with white light, which obviously can be an essential practical advantage. (For example, various kinds of security hologram applications would not be practical if a laser would be required for viewing.) However, the observed graded colors are then not those of the original object. After all, the recorded hologram does not contain such color information. Furthermore, vertical parallax must be sacrificed for that technique, i.e., a full 3D appearance is not possible.

It is possible even to create full-color holograms, which can be viewed with white light sources. Such techniques are usually based on rather involved operation principles, being substantially more difficult to understand than the basic principles as explained above. Also, they can usually not achieve a high image quality.

Another technical challenge is to produce moving 3D images (volumetric displays). Here, holography competes with other techniques, which appear to be more practical.

Although it would obviously be attractive to replace conventional two-dimensional photography and videos with holographic 3D imaging, the stringent requirements which are typical for holographic techniques are still strongly limiting the range of practical applications. Even after decades of development, we seem to be far from using holographic 3D color photographs in consumer applications or high-quality volumetric displays. Nevertheless, some applications have already been established; some examples:

In the future, holography may serve for high density data storage. In contrast to currently used optical storage media, where only a thin two-dimensional layer is utilized, holographic memories could store data in a 3D fashion, potentially reaching enormous storage capacities within quite limited volumes. However, developing practical implementations remains a substantial challenge.

The RP Photonics Buyer's Guide contains 12 suppliers for holography devices. Among them:

RPMC Lasers offers a wide range of laser wavelengths for holography, ranging from the blue through the IR. All of these lasers over extremely long coherence length (>100 m), stable output power, and provide a high quality TEM00 beam profile. 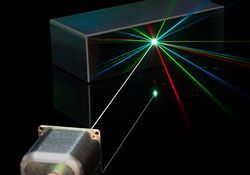 TOPTICA provides fixed-frequency and tunable cw laser sources ideally suitable for holography. Available in the wavelength ranges from UV to visible (RGB) on to the IR, these sources offer coherence lengths greater than 100 m and powers up to several watts.