In laboratories, one is often dealing with infrared light, e.g. in the form of infrared beams emitted by lasers. It can then be difficult e.g. to follow a beam path or to check a beam position without any visual aid. Therefore, one often uses infrared viewers (IR viewers), i.e., devices which effectively make infrared light visible. One can look into the ocular lens (eyepiece) of such a viewer and see an image which is created from infrared light entering the device through the objective on the opposite side.

The basic operation principle of an infrared viewer is as follows:

The precise technology used in the image converter is usually not revealed in product descriptions, except for the used photocathode material, which determines the spectral response (see below).

Of course, only light entering the objective of the viewer device can contribute to a perceived image. That is not the case for a laser beam not entering the device. However, some tiny part of the power of a laser beam may be scattered in air (e.g. at dust particles) and therefore nevertheless create a visible image of the laser beam, if its optical power is high enough and the observation distance is not too large.

In practice, one often does not directly observe laser beams, but only randomly scattered light which one obtains when a laser beam is hitting some diffusing surface of a white card or screen, for example.

Light propagating in optical fibers can also often be observed due to scattering of light at inhomogeneous of the fiber core or the core–cladding interface. In case of active fibers (rare-earth-doped fibers), one can often observe fluorescence light from the laser-active ions. Of course, one does not obtain any information on the emitted wavelengths.

The sensitivity of the viewer often varies enormously with in the specified wavelength range!

Image converters have a strongly wavelength-dependent sensitivity. Many of the used materials have a high sensitivity for visible light – which can be useful, because this allows one to see not only the infrared radiation or objects hit by that radiation, but also any objects illuminated by normal daylight or room lights. In addition, they are sensitive to some part of the infrared spectrum. For some devices, the sensitivity falls off quite rapidly above for certain critical wavelength (e.g. 1.3 μm), while for others it decreases quite smoothly for longer and longer wavelengths. Particularly in the latter case, the usable wavelength range depends on the intensity of the observed infrared light, because the lower sensitivity sufficient if the incident intensity is high enough.

For work in the area of optical fiber communications, it is normally sufficient to have a near infrared viewer working up to wavelengths around 2 μm, because light with longer wavelengths could anyway not be transmitted through silica fibers, and one usually deals with light only up to ≈1.6 μm.

Even within the usable wavelength range specified by the manufacturer, the sensitivity can vary enormously. The observable intensity levels may vary by more than a factor of 100 within that wavelength range. For example, a near-infrared viewer with the common S1 photocathode material (Ag-O-Cs: based on silver oxide, doped with cesium, used since 1930) is said to be usable for about 0.4 μm to 1.2 μm or even 1.3 μm; it is reasonably sensitive to 1064-nm light from a YAG laser (although much less than at 0.8 μm), while far higher intensities are required to see anything at 1.2 μm or even 1.3 μm.

There are also mid- and long-wave infrared cameras which can be used at substantially longer wavelengths, but these are usually not considered as viewers, since they provide an electrical output instead of a directly visible image.

Most infrared viewers are hand-held devices which are battery operated (possibly with rechargeable batteries). They are hold with a handle, and with one finger one can press a button which turns the image converter on. By activating it only while needed, one can reach a longer battery life. (Several hundred hours of continuous operation are often possible.) Some devices can be fixed to the head of the observer with some facemask, so that hands-free operation becomes possible. Also, viewers are often mounted in a fixed position, if one always needs to observe the same small area. Using an external power supply instead of a battery may then be practical.

The obtained image quality depends substantially on the used device and is usually much lower than that of a normal camera for visible light:

The image quality achievable with infrared viewers is normally quite poor, comparing with cameras for visible light.

It may be difficult to judge the transverse intensity profile of a laser beam, for example, if the beam diameter is (as usual) relatively small (e.g. below 1 mm). Therefore, an infrared viewer can never be regarded as a replacement for a beam profiler camera.

With some viewers, it is possible to attach additional filters to the objective – for example, for suppressing influences of visible light. Also, there are close-up lenses, with which one can observe nearby objects with higher magnification; that can be useful, for example, when working with fiber optics.

In contrast to night vision devices, for infrared viewers in laboratory use it is not common to have binoculars; the usual devices are for one eye only. It can actually be advantageous to have “normal” vision with one eye while using a viewer, e.g. because of the very restricted angular range of the viewer.

A low-cost alternative to an infrared viewer can be an infrared sensor card; this also allows one to follow a beam path, for example, but is more limited in its application.

The RP Photonics Buyer's Guide contains 14 suppliers for infrared viewers. Among them: 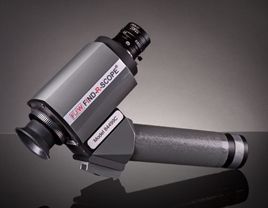 The quality of a laser product is largely determined by its design and not just by the used parts.

Note: with a trial-and-error approach you may waste a lot of time and resources. (Also consider time to market!) Therefore, competent help is the key for cost-efficient and lower-risk developments.

You may also involve us only if you got into trouble, but coming earlier is usually better.