The device (see Fig. 1) is a hollow sphere with a diffusely reflecting internal surface, typically two or more small openings (ports) for introducing light or attaching a photodetector, and often some so-called baffles, which are light barriers used to prevent direct illumination of a detector by a light source. The arrangement causes many diffuse reflections of the introduced light before it reaches a detector, so that the light flux becomes very uniform at the detector, and nearly independent of the spatial and polarization properties of the introduced light: the detected radiant flux (optical power) depends only on the total introduced power. In that way, the total output power of a light source can be measured, even if the beam divergence is fairly large. Such a device, consisting of an integrating sphere and a photodetector, is called an integrating sphere photometer.

Under certain simplifying assumptions, such as Lambertian scattering characteristics of the inner sphere surface with a uniform reflectivity ρ and a negligible fraction of the sphere surface covered with ports or other obstructions, the irradiance obtained at a small output port can be calculated as

where Φ is the radiant flux injected through another port. The ρ-dependent second term can become quite large in cases with high reflectivity, e.g. 99 for ρ = 0.99. This is essentially because of a large number of reflections of light in such situations. However, the more closely ρ approaches unity, the larger is the influence of the ports, i.e., the less accurate the estimate is.

Apart from such measurement purposes, an integrating sphere can be used to illuminate a device very uniformly. This can be important e.g. for testing the homogeneity of digital imaging equipment (e.g. CCD arrays).

Ideally, the coating on the inner side of the integrating sphere has a very high reflectivity over the required wavelength range, and the reflection is very diffuse. If the optical losses in the sphere and through the small ports are low, the multiple reflections can lead to a fairly high optical intensity inside the sphere and consequently to a high optical efficiency, even if the sphere is much larger than the light source and the detector.

The RP Photonics Buyer's Guide contains 21 suppliers for integrating spheres. Among them: 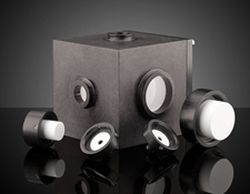