Laser microscopy is a class of techniques for generating microscopic images. In most cases, one uses laser scanning of some sample with a diffraction-limited laser beam. Scanning may be achieved by moving either the laser beam or the sample. Light carrying information on the sample may be generated in different ways, for example by scattering, through polarization changes, by second harmonic generation or by exciting fluorescence (→ fluorescence microscopy). The intensity of that light coming from the object is recorded for each point in the sample . From these data, images can be produced on a computer, and of course they can be stored in electronic form. Numerical methods can be applied to process the images, e.g. to enhance the contrast.

A frequently used imaging technique is based on a confocal geometry (→ confocal scanning microscopes), where the light from the focus in the sample is imaged (e.g. with a microscope objective) onto a pinhole, behind which the optical power is detected. This geometry suppresses the influence of light coming from other regions in the sample, e.g. from before or after the focus, because such light can not efficiently pass through the pinhole. In effect, mainly the depth resolution is improved. The confocal principle is emphasized in the term confocal laser scanning microscopy, and discussed in more detail in the article on confocal scanning microscopes.

Instead of fluorescence, one may exploit acoustic effects of pulsed laser beams; the resulting method is called optoacoustic or photoacoustic microscopy [13].

For most variants of laser microscopy, diffraction limits the possible beam waist radius of the scanning laser beam and thus the obtained image resolution. However, some techniques allow to beat the diffraction limit, and are sometimes called super-resolution microscopy or nanoscopy. One class of methods is based on non-uniform illumination in combination with a nonlinear photoresponse. Stimulated emission depletion microscopy (STED microscopy) (explained in the article on fluorescence microscopy, and related to the Nobel Prize in Chemistry 2014) is the most popular method of that type. Other techniques are based on certain fluorescent molecules, which preferably occupy certain parts of the specimen and can be localized very precisely (→ stochastic optical reconstruction microscopy, STORM).

Images produced with later microscopes are usually not directly observed through an optical instrument, but on a high-resolution computer screen, for example. That makes it easy to let several people simultaneously view images.

The computer can then also be used for various auxiliary purposes:

The RP Photonics Buyer's Guide contains 14 suppliers for laser microscopes. Among them: 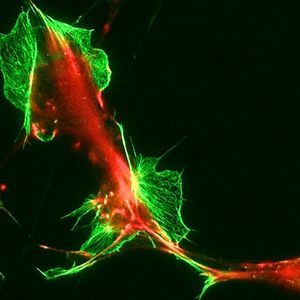 Optical microscopes are used to study objects that are too small to be seen with the naked eye. This can be organic cells, semiconductor surfaces, or even single molecules. There are two different approaches in optical microscopy, either detecting near-field (SNOM) or far-field signals emitted by the investigated materials.

There are various methods for optical microscopy that utilize different light sources. For some microscopy techniques a simple white light source is sufficient, whereas more sophisticated methods require lasers as light source. Those can be single-mode diode lasers or multi-laser engines that deliver a continuous laser beam at one or several colors, some techniques rely on short laser pulses with femtosecond duration that can be provided by TOPTICA's ultrafast fiber lasers.