Different devices have been developed. Some can measure object distances of multiple kilometers, while others are designed for much smaller distances e.g. within a building. Often, the obtained object distance appears on a digital display.

Compared with ultrasonic or radio and microwave frequency devices (radar), the main advantage of laser distance measurement techniques is that laser light has a much smaller wavelength, allowing one to send out a much more concentrated probe beam and thus to achieve a higher transverse spatial resolution.

A rangefinder often contains a viewing device for exactly defining the target.

Laser rangefinders often contain viewing devices, allowing the user to precisely direct the laser beam at the object of interest simply by orientating the device such that the object of interest appears at the center of the viewed image, marked with a cross hair. (The measured distance may be displayed in the same viewing device.) In other cases, a visible laser beam (from the measurement laser or possibly from a separate built-in laser pointer) can be seen on a not too distant object for checking the targeted position.

Apart from the laser, photodetector and optical parts, a laser rangefinder contains electronics, typically including a microprocessor, for controlling the laser, calculating and displaying the measured distance, monitoring and charging the battery, etc.

The most straightforward measurement principle is to send a short laser pulse from the device to the object of interest and monitor the time until reflected or scattered light can be detected with a sufficiently fast photodetector. The distance can then simply be calculated as one half the measured round-trip time divided by the velocity of light.

The combination of high-sensitivity and high temporal resolution of a photodetector is not easy to achieve.

Obviously, the achievable spatial resolution is limited by the pulse duration and/or the speed of the photodetector. One frequently uses pulses from a Q-switched laser, having durations of a few nanoseconds or sometimes even below 1 ns, as can be obtained from particularly compact lasers, e.g. monolithic passively Q-switched microchip lasers. A fast photodiode can offer a temporal resolution of the same order, although that is not easy to achieve for very low received optical powers, as result for large observation distances, particularly when light from diffuse scattering must be used. Note that the received optical pulse energy is proportional to the inverse square of the observation distance as long as the beam divergence of the outgoing beam is negligible; otherwise, it decays even more rapidly for increased distances.

Over long distances, the beam divergence may lead to a substantially increased spot size on the object, and atmospheric distortions may add to that challenge. Particularly for small objects, increases of the spot size on the object may degrade the received signal strength, and there may be disturbances by light scattered on neighbored objects.

Different measures can be taken to improve the received signal strength and the signal-to-noise ratio, so that measurements over large distances are possible:

A number of measures can be taken to optimize the distance range of a rangefinder.

For rapid measurement updates or for averaging purposes, one may use a regular pulse train with a certain pulse repetition rate. For high repetition rates, this generates a range ambiguity; the device has to determine to which sent-out pulse a received pulse belongs. Variable repetition rates or bursts of pulses may be used to resolve that.

Laser rangefinders may also have to cope with additional challenges, such as spurious signals from small objects flying through the air (e.g. leaves) or attempts of jamming or blinding (in military applications).

For a fixed modulation frequency f, there is an ambiguity of the measurement: if the object distance is changed by a multiple integer of c / (2 f), the phase of the detector signal changes by a multiple integer of 2π, i.e., effectively not at all. This ambiguity can be removed by doing measurements with multiple different frequencies and combining the results, typically with suitable software running on a microprocessor. That principle works well particularly if the requirements in terms of maximum object distances and spatial resolution are not too stringent.

The challenges of detecting weak signals for large object distances are in principle similar to those for direct time-of-flight measurements, but one may use a lock-in amplifier to detect the modulations with strong suppression of random noise influences. Overall, the detection becomes substantially easier to realize than for the direct time-of-flight method. Therefore, most handheld laser rangefinders for moderate object distances are working based on the phase shift method.

Some laser rangefinders have additional features which can be relevant for certain applications:

Range finding with lasers can raise serious laser safety issues, particularly when intense pulses from Q-switched lasers are used; that is often required for large detection distances in order not only to obtain a detectable amount of returned light, but also to avoid a dominating influence of ambient light. Then, however, inconvenient additional measures may have to be taken to ensure safety, particularly for human eyes.

Frequently, one tries to design devices to operate a laser safety class I, so that special additional laser safety measures are not required. That, however, can severely limit the optical power which can be sent to the target, and therefore the detection capabilities.

Such trade-offs can be mitigated by applying eye-safe lasers, e.g. in the 1.5-μm spectral region, where far more optical power can be safely used than e.g. in the 1-μm region. However, both the choice of lasers and photodetectors (and their performance) are then substantially limited, and the system cost may be significantly higher.

As mentioned above, beam divergence can be a serious issue for large object distances. A large optical telescope and a laser with high beam quality are then desirable.

As essentially all other measurement techniques using lasers, laser distance measurements can be affected by laser noise – although detection noise is usually the dominant issue. Other noise-related issues can arise from stray light and laser speckle effects.

The targets can have very different reflection and scattering properties. Problems can arise for very low reflection or for specular reflections. In the latter case, a lot of the incident light may be reflected in directions which are not useful for the detection.

Laser rangefinders has a number of quite different applications:

The RP Photonics Buyer's Guide contains 19 suppliers for laser rangefinders. Among them: 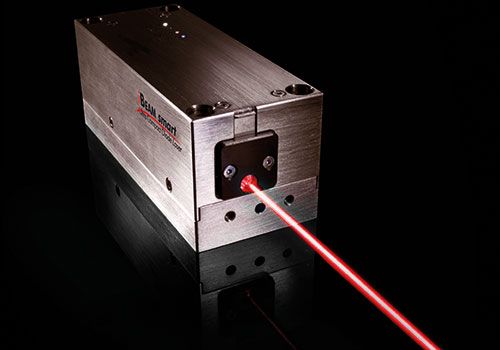 Laser rangefinders can be used to monitor or measure distances or object lengths. They can also provide positional locations over long distances, e.g. several kilometers, without physically touching the observed object. The laser range finders are regularly used in geodesy, sports, hunting or military. Usually, the distances are measured with accuracies of up to a millimeter, whereas the measured object can even be in motion. In addition, measurements on natural surfaces with low reflectivity are also possible.

The Beam smart WS is the ultimate choice when looking for a compact and narrow linewidth OEM diode laser system. It is the wavelength stabilized version of the iBeam smart featuring reliable wavelength-stabilized diodes. Combined with iBeam smart’s flexible, mircoprocessor based electronics it makes system integration a snap. 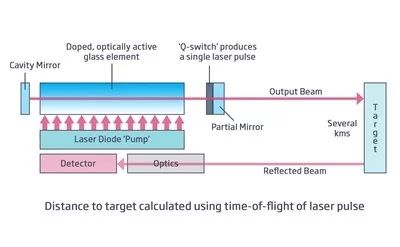 Light-MiLES was an Innovate UK (formerly Technology Strategy Board) funded research project running from December 2012 to May 2015. The project goals were to develop a novel laser transmitter and integrate it with an imaging array to produce an active laser-illuminated imaging sensor. The project consortium was headed by Thales Optronics with G&H, Glass Technology Services, and the University of Leeds as participants. The challenge for G&H was to provide a suitable photonic packaging solution for this demanding application.

The Light-MiLES project has developed a novel eye-safe laser transmitter combining the performance of a solid-state laser with the packaging and form-factor of a diode laser device. The source is well suited for long-range laser range-finders (LRF) or for integration into multi-platform sensor systems, such as man-portable target locators or airborne gimbals. These are all applications which require ultra-compact, low cost, efficient laser transmitter performance.

See also: distance measurements with lasers, time-of-flight measurements
and other articles in the category optical metrology