Loupes are a simple optical devices used for viewing details of objects with some magnification. In contrast to a magnifying glass, a loupe is used in a close distance from the eye, is typically smaller and has a shorter focal length. It essentially consists of a single lens, or sometimes on a compact combination of lenses, which modify the path of light by refraction. The optics are typically surrounded by some plastic mount which can be held between two fingers or fixed at the eye.

Loupes may be used for the inspection of optical elements, e.g. before and after cleaning operations, but also for other types of small objects e.g. in jewelry, biology, electronics and watchmaking. Specialized loupes, often of binocular type, are used in surgery and dentistry.

A loupe always works together with the eye, and the magnification depends on its use.

The imaging properties of a loupe must always be considered in conjunction with those of the human eye. The magnification of the obtained virtual image is defined as the ratio of the apparent object sizes as observed with and without the loupe. It is not only a property of the loupe, since it also depends on how the device is used:

Loupe Close to the Relaxed Eye

We first consider the common situation that a loupe is placed in front of the eye of the observer, assuming that the eye is relaxed, i.e. accommodated for viewing objects at large distances. The loupe can then collimate light emerging from object points in a distance from the lens which is its focal length, and such light can be focused by the eye's optical system to the retina. The distance between the eye and the loupe is actually not critical in this configuration. The distance between the object and the loupe is adjusted such that one can well accommodate to obtain a sharp image. It is thus not necessary to adapt a loupe to the eye, as it is required for reading glasses.

This configuration is also well usable with an older eye, which can no longer accommodate to shorter observation distances. Effectively, the loupe compensates for the loss of accommodation, and even allows accommodation of the old eye to shorter distances than with a healthy unaided eye. In that sense, it helps the older eye more than one might expect from the specified magnification.

Loupe Close to the Focused Eye

Even closer observation distances are possible when the eye itself accommodates to shorter distances, effectively adding some dioptric power to that of the loupe. In that case, the magnification for the healthy eye is increased by 1, compared with the previously discussed situation. That of course would not work with an old eye.

Magnifying Glass in Larger Distance, Closer to the Object

As a loupe is usually held quite close to the observing eye, a handle as that of a magnifying glass would not be particularly useful. Instead, one often holds a loupe simply between two fingers or fixes it at the eye. Some loupes are mounted like reading glasses – then normally with one loupe per eye –, so that no hand is required to hold them. Such instruments are called dental loupes or surgical loupes, for example, depending on the intended field of application. Other loupes have a cylindrical mount which allows one simply to place them on a horizontal object, e.g. a postal stamp.

Simple loupes with moderate magnification (e.g. 4-fold) are often made as biconvex lenses. If a loupe should have a larger size, it is advantageous to use an aspheric lens. There are also achromatic loupes, which can have a large magnification but tend to produce substantial image distortions.

Sometimes, ocular lenses (eyepieces) as used in microscopes or telescopes, for example, are also called loupes.

The RP Photonics Buyer's Guide contains 3 suppliers for loupes. Among them: 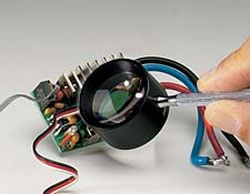 Our handheld magnifiers are used to provide convenient, portable magnification capabilities to a wide range of applications such as quality inspection, watchmaking, or gemology. They are designed to fit in one's hand or pocket for optimal portability or ease of use. The compact design make them ideal choices providing readily available image enlargement abilities to hobbyists or those with vision impairments.