Microchip lasers are alignment-free monolithic solid-state lasers [1] where the laser crystal (or glass) is directly contacted with the end mirrors of the laser resonator (see Figure 1). Such lasers are usually pumped with a laser diode (→ diode-pumped lasers), either directly or via an optical fiber. They typically emit a few hundred milliwatts of average power, even though > 1 W is sometimes achieved.

In some cases, there may be another optical device between the laser medium and an end mirror, e.g. a nonlinear crystal used as electro-optic modulator for Q switching or intracavity frequency doubling, or an undoped transparent plate for improving the power handling capability and increasing the effective mode area.

The term microlaser is also sometimes used for lasers with a very compact resonator setup (i.e. for miniature lasers), but not always in the context of microchip lasers.

Most microchip lasers do not have any intentionally curved resonator mirror. The resonator modes are then usually determined by thermal lensing in the laser crystal (including possible bulging of the crystal's end faces), in some cases with a significant influence also from gain guiding [12]. The stability zone of the simple resonator extends from zero focusing power to some maximum value, which is determined by the resonator length. This also determines the minimum beam radius of the fundamental mode. One usually obtains stable diffraction-limited beam quality by pumping a volume within the fundamental resonator mode.

The use of thermal lensing for the formation of resonator modes introduces some limitations, e.g. concerning the possible range of pump powers or the use of gain media with negative dn / dT.

For isotropic gain media such as Nd:YAG or for glasses, the gain is the essentially the same for both polarization directions. The laser output may nevertheless be polarized due to weak effects such as thermally induced birefringence, if the pump beam does not have an exactly circular profile.

Without special measures, microchip lasers often exhibit single-frequency operation. This results from the short resonator length, which leads to a large free spectral range. When the temperature of the laser crystal changes, the emission frequency may drift in a large range (many gigahertz wide) until a mode hop occurs.

Due to their short laser resonator with very short round-trip time, microchip lasers are well suitable for generating rather short pulses. The simplest method is gain switching [2], which is already sufficient for obtaining sub-nanosecond pulses.

Q-switched microchip lasers also allow the generation of unusually short pulses with durations below 1 ns, in extreme cases even below 100 ps [10]. This holds particularly for passive Q switching with a SESAM (Figure 2), but it is also possible to use a saturable absorber crystal e.g. of Cr:YAG or some Cr-doped ceramics [14], or to do active Q switching with an integrated Pockels cell.

Q-switched microchip lasers (see above) allow simple and efficient single-pass nonlinear frequency conversion with external nonlinear crystals, since the peak powers are very high. In the case of continuous-wave operation, efficient intracavity frequency doubling is an option. The latter can be achieved either with a nonlinear crystal bonded to the laser crystal, or by using a self-frequency doubling laser crystal with χ(2) nonlinearity, such as Nd:YCOB. Usually, this leads to green lasers, emitting e.g. at 532 nm.

Microchip lasers find many applications, many of which benefit from a compact and rugged setup and the small electric power consumption. In other cases, the short (sub-nanosecond) pulse durations and/or the possible high pulse repetition rates of Q-switched microchip lasers are of interest. Some examples of applications are:

The RP Photonics Buyer's Guide contains 15 suppliers for microchip lasers. Among them:

RPMC Lasers offers passively Q-switched microchip lasers that emit high peak power pulses at wavelengths of 1064, 946, 473, 355, 266, and 236.5 nm. These lasers are available with picosecond to nanosecond pulse widths and contain an integral photodiode which can serve as a trigger, for precise timing with detection systems. 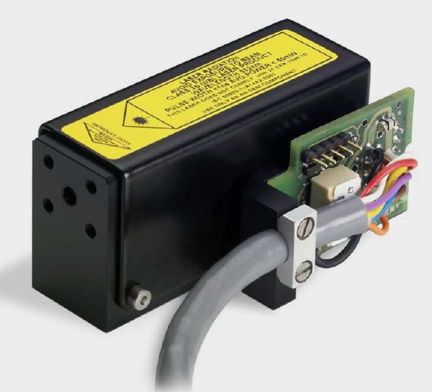 Teem Photonics also offers a wide range of short pulse lasers, e.g. the eye-safe MNE-06E-100, generating more than 1 kW of peak power. Besides, there are versions with frequency-converted output in the green and in the ultraviolet at 355 nm, 266 nm and 213 nm.