Microlens arrays (or micro-lens arrays) are one- or two-dimensional arrays of microlenses, i.e., rather small lenses (lenslets). In most cases, the lenslets form a periodic pattern either of square or hexagonal type, where the lens pitch is a few hundred micrometers, some tens of micrometers or even less.

The outer transverse shape is usually a square (e.g. 10 mm × 10 mm), or possibly a rectangle or circle. The number of microlenses can be thousands, possibly many thousands or even millions.

Microlens arrays are available as separate optical components. Some of them are provided in mounted form, i.e., surrounded by some mental or polymer part which fits into standard optical mounts. The lenses are often equipped with anti-reflection coatings on both sides. Sometimes, the lenses are realized as a thin transparent structured layer contacted to a flat homogeneous glass or semiconductor substrate.

There are also microlens arrays which are part of a larger assembly. For example, some CCD and CMOS image sensors contain one microlens per photodetector for increasing the light collection efficiency: all incident light should be concentrated to the active areas, which cover only part of the chip area.

Important Parameters of the Microlens Arrays

Such arrays can differ in a number of respects:

Lens arrays are usually produced with a micro-fabrication method which forms all microlenses in a single production step. For example, one may employ a photolithographic method, where the lens pattern is defined by a photolithographic mask, which can be of grayscale or binary type. (Partially, one uses techniques which are common in semiconductor processing technology, and are called wafer level optics.) Particularly in the area of plastic optics, one applies mechanical techniques such as molding, e.g. of epoxy materials.

In some cases, the phenomenon of surface tension is used for obtaining smooth and repeatable lens surface shapes. The resulting surface is then generally non-spherical, and not necessarily ideal with respect to optical aberrations.

One can also apply methods of laser material processing, forming only one lenslet at a time or possibly some number of them, using multiple processing beams. Such methods provide substantial versatility and flexibility, but are generally slow and expensive.

Different optical materials can be used, such as fused silica, various other glasses or plastics (polymer materials). The choice of material must fit to the chosen production technique, but also has effects on various device properties, e.g. the usable spectral range and the mechanical and thermal stability.

The RP Photonics Buyer's Guide contains 17 suppliers for microlens arrays. Among them: 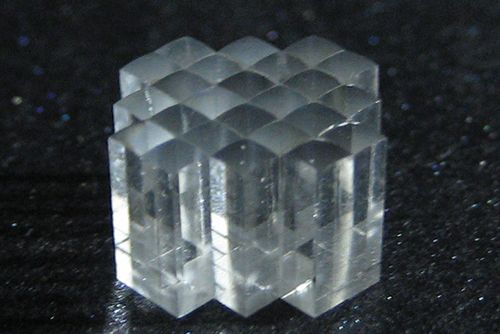 Shanghai Optics Inc custom micro-lenses are made from high index optical glass. They are precision polished to very high tolerances, so that they can be mounted into complex imaging systems. 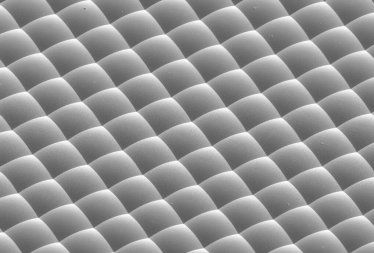 The masters are offered in fused silica and nickel. Lens depth/height and lens width can be controlled independently, so any parabolic lens shape can be realized on the stamps. Polymer replications with convex and concave lens arrays can also be provided.

We also have a wide selection of microlens standard stamps.