Ask RP Photonics for advice on the best choice of a nonlinear crystal material, or on the optimization of the phase-matching configuration and crystal length.

Transparent crystalline crystal materials can exhibit different kinds of optical nonlinearities which are associated with a nonlinear polarization. For example, media with a χ(2) nonlinearity are mainly used for parametric nonlinear frequency conversion (e.g. in frequency doublers and optical parametric oscillators) and for electro-optic modulators, whereas χ(3) nonlinearities lead to the Kerr effect, the Raman effect, and four-wave mixing. In essentially all cases, artificial (rather than naturally occurring) crystals are used.

Many different properties of a nonlinear crystal can be important for an application e.g. in nonlinear frequency conversion:

Additional properties can be relevant for a comparison:

The choice of the most suitable crystal material for a given application is often far from trivial; it should involve the consideration of many aspects. For example, a high nonlinearity for frequency conversion of ultrashort pulses does not help if the interaction length is strongly limited by a large group velocity mismatch and the low damage threshold limits the applicable optical intensities. Also, it can be highly desirable to use a crystal material which can be critically phase-matched at room temperature, because noncritical phase matching often involves the operation of the crystal in a temperature-stabilized crystal oven.

Lithium niobate (LiNbO3) and lithium tantalate (LiTaO3) are materials with a relatively strong nonlinearity. They are often used for nonlinear frequency conversion and also for electro-optic modulators. Both materials are available in congruent and in stoichiometric form, with important differences concerning periodic poling and photorefractive effects (see below). Lithium niobate and tantalate are the most often used materials in the context of periodic poling; the resulting materials are called PPLN (periodically poled lithium niobate) and PPLT, respectively, or PPSLN and PPSLT for the stoichiometric versions. Both have a relatively low damage threshold, but do not need to be operated at high intensities due to their high nonlinearity. They have a tendency for photorefractive effects, which are detrimental for frequency conversion, but are used for, e.g., holographic data storage in Fe-doped LiNbO3 crystals. The tendency for “photorefractive damage” depends strongly on the material composition; e.g. it can be reduced via MgO doping and by using a stoichiometric composition.

Potassium niobate (KNbO3) has a high nonlinearity. It is used for, e.g., frequency doubling to blue wavelengths and in piezoelectric applications.

Potassium dihydrogen phosphate (KDP, KH2PO4) and potassium dideuterium phosphate (KD*P or DKDP, KD2PO4, exhibiting extended infrared transmission), are available in large sizes at low price. They exhibit good homogeneity over large volumes and have a high damage threshold, but are hygroscopic and have a low nonlinearity.

There are a number of borates, the most important ones being lithium triborate (LiB3O5 = LBO), cesium lithium borate (CLBO, CsLiB6O10), β-barium borate (β-BaB2O4 = BBO, strongly hygroscopic, often used in Pockels cells), bismuth triborate (BiB3O6 = BIBO), and cesium borate (CSB3O5 = CBO). Yttrium calcium oxyborate (YCOB) and YAl3(BO3)4 (YAB) are also available in rare-earth-doped form for use as a laser gain medium, and can then simultaneously be used for generating and frequency-converting laser light. Less frequently used are strontium beryllium borate (Sr2Be2B2O7 = SBBO) and K2Al2B2O7 (KAB). LBO, BBO, CLBO, CBO and other borate crystals are suitable for the generation of relatively short wavelengths, e.g. in green and blue laser sources, and for UV generation (→ ultraviolet lasers), because their band gap energy is relatively high, the crystals are relatively resistant to UV light, and there are suitable phase-matching options. Borates such as LBO and BBO also work well in broadly tunable optical parametric oscillators and optical parametric chirped-pulse amplification.

For mid-infrared (and partly also terahertz) generation, one requires crystal materials with a transparency range extending far into the infrared spectral region. The most important of these media are zinc germanium diphosphide (ZGP, ZnGeP2), silver gallium sulfide and selenide (AgGaS2 and AgGaSe2), gallium selenide (GaSe), and cadmium selenide (CdSe). Gallium arsenide (GaAs) has also become useful for mid-infrared applications, since it is possible to obtain quasi-phase matching in orientation-patterned GaAs [13, 21].

In many cases, a nonlinear crystal used for nonlinear frequency conversion has a very long lifetime, which is longer than that of the whole laser system. The crystal material is essentially not modified during operation. However, a reduced crystal lifetime can occur under various circumstances:

Crystal lifetime can also be strongly dependent on the material quality, although certain degradation phenomena appear to be intrinsic limitations of the material.

For high-power UV generation, nonlinear crystals may become consumables: they need to be replaced quite often within the lifetime of the whole laser system (e.g., every few hundred hours of operation). Often, several problematic aspects come together in the regime UV generation: crystal materials are generally more sensitive to ultraviolet light (having high photon energies), exhibit a higher absorption in that regime, and in case of ultrashort pulses the high group velocity mismatch enforces the use of a shorter crystal, which requires high optical intensities for a given conversion efficiency.

For some applications, nonlinear crystals with a very small thickness of well below 1 mm are used. This may be necessary for minimizing the group velocity mismatch, e.g. in optical autocorrelators for extremely short pulses.

A common method for obtaining ultrathin crystals is to first optically contact a thicker nonlinear crystal with some substrate (e.g. of fused silica) and then to polish the crystal down to the required thickness of e.g. 20 μm. The group velocity mismatch in the thicker substrate material may not matter, as the nonlinear interaction takes place only in the thin crystal. The substrate only serves to mechanically stabilize the thin nonlinear crystal.

It is also possible to fabricate free-standing crystals with a thickness of only 100 μm, sometimes even below 30 μm.

The RP Photonics Buyer's Guide contains 71 suppliers for nonlinear crystal materials. Among them: 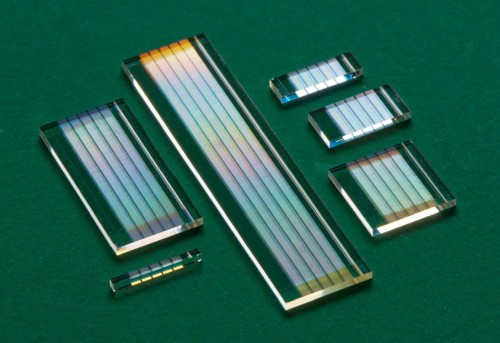 Covesion is a world leader in the design and manufacture of periodically poled lithium niobate for non-linear frequency conversion. MgO:PPLN crystals and waveguides are available for high efficiency SHG, DFG, SFG and OPO interactions. Wavelength generation coverage runs from visible to mid-IR

Periodic polling allows for quasi phase matching, which maintains phase relation of the photons throughout the crystal where they would otherwise fall out of phase. This engineered effect leads to a much higher conversion efficiency than would be found in the regular crystal.

Readily available stock crystals and waveguides can be provided on short timescales to rapidly meet your application needs, providing the capability to generate laser light in a wide range of wavelengths. 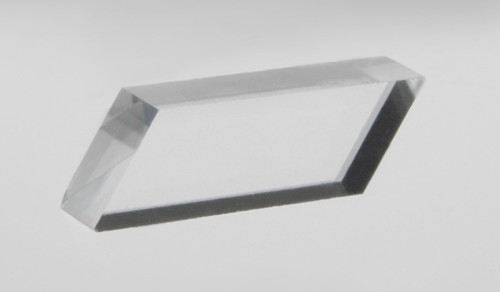 Barium borate (BBO) is a versatile nonlinear crystal, suitable for use in harmonic generation operations, optical parametric oscillators, and in electro-optical applications from the near infrared to the deep ultraviolet. 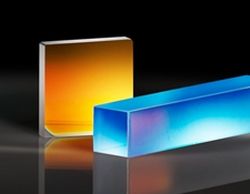 Nonlinear crystals of either β-barium borate (BBO) or lithium triborate (LBO) are used for frequency conversion of laser sources. BBO crystals feature thicknesses from 0.2 mm to 0.5 mm to minimize group velocity mismatch and are ideal for frequency doubling or tripling of Ti:sapphire and Yb:doped laser pulses. The critical and noncritical phase matching LBO crystals are ideal for second or third harmonic generation of Nd:YAG and Yb:doped lasers. 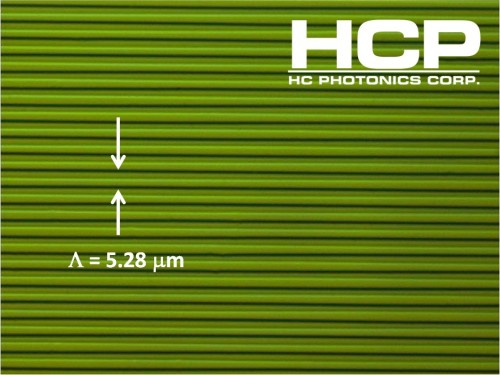 - PPLN waveguides: excellent performance, i.e. >50% overall efficiency. Fibered module generating >2 W at 780 nm (1560 nm SHG) is off-the-shelf. Crystals for other wavelengths are also available or can be designed upon request.