Optical breadboards are flat platforms which usually contain a regular grid of threaded mounting holes for fixing various types of optical mounts or posts. Compared with optical tables, they are smaller in terms of area and particularly in terms of thickness.

The top plate, containing the threads, usually consists either of stainless steel (ferromagnetic, suitable for magnetic clamps) or of aluminum and has a thickness around 3 to 5 mm. It should exhibit a high degree of flatness, e.g. ±0.1 mm over one square meter. The core usually consists of a honeycomb lattice, often made of steel, which can be highly stable without being enormously heavy. Note that it is essential for many applications that such a breadboard is very stiff. By using a dense plate material with a high velocity of sound, one obtains high resonance frequencies. A breadboard should also exhibit well damped mechanical resonances – ideally, with critical damping for a wide range of resonances. For that purpose, additional polymer materials may be used as dampers – also for sealing the holes, such that a small part falling into a hole is not lost.

There are also solid aluminum or steel plates with a grid of holes, which are substantially cheaper, but are inferior in various respects (e.g. rigidity and vibration control); they are suitable for simple demonstrations, but normally not for lasers or interferometers. For those, one should chose a scientific grade or precision grade board. Industrial grade breadboards are intermediate in terms of quality and can be used for not particularly critical experiments.

Boards with metric or imperial grid spacing are available; common spacings are one inch (25.4 mm, imperial units) and 25 mm (metric), or one half of those values. Standard threads are M6 and 1/4“-20; the latter means 1/4 inch major diameter and 20 threads per inch according to the Unified Thread Standard.

Breadboard are very suitable for making prototype devices, because it is easy to stably mount a wide range of components but also to move or remove them as necessary. One may directly fix an optical mount on a breadboard, but frequently one uses a post in between them, which also gives some flexibility concerning the height. Note, however, that higher posts generally lead to reduced mechanical stability.

Sometimes, an optical breadboard is mounted at some height above an optical table. This can be useful in situations where one needs to avoid excessively high posts. Also, it can be highly convenient to retain the option of moving a whole sub-assembly (e.g. a laser or diagnostic setup) without losing its internal alignment.

Even some industrial devices are based on an optical breadboard, possibly integrated in some housing. At least for small production volumes, that approach may be sensible – particularly when some amount of flexibility should remain for the user.

The RP Photonics Buyer's Guide contains 19 suppliers for optical breadboards. Among them:

Aluminium and solid steel breadboards for smaller and non-critical optical setups. We offer a wide range of standard table top and breadbord sizes, while custom sizes can be produced on request. 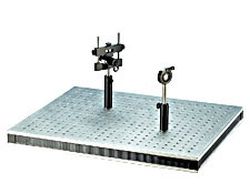 Edmund Optics offers a range of optical tables and breadboards. Both imperial and metric versions are avaialble in a range of dimensions.

See also: optical tables, opto-mechanics
and other articles in the category general optics

Code for Links on Other Websites

If you want to place a link to this article in some other resource (e.g. your website, social media, a discussion forum, Wikipedia), you can get the required code here.

HTML link on this article: