There are many optical devices and applications where it is necessary to introduce a certain time delay for a light beam (typically, a laser beam):

In most of those cases, one requires some kind of variable optical delay line, while in a few cases a fixed delay is sufficient. Variable delays are often made as rapidly scanning delay lines, periodically scanning through some range of delays. The requirements in terms of delay range, precision, speed etc. depend very much on the application. Different kinds of delay lines are discussed in the following.

Most optical delay lines work on the basis that the pulses are sent through an optical arrangement with a variable path length. Typically, path lengths in air are used, which implies a delay of ≈3.34 ps per millimeter, or ≈1 ns for 30 cm.

As an example, Figure 1 shows the setup of an intensity autocorrelator, which contains a simple optical delay line on the left side. By moving two mirrors, which are together mounted on some movable part (forming a movable retroreflector), the pulse timing can be controlled. Here, a movement by 1 mm changes the pulse timing by twice 3.34 ps, since two arm lengths are changed. For pulse durations of 1 ps, for example, one requires a delay range of the order of 1 mm, corresponding to a travel range of 0.5 mm.

In some cases, the delay is adjusted manually, for example with a micrometer screw. High-quality opto-mechanics are desirable for reaching a high precision.

In many cases, e.g. for autocorrelators and cross-correlators, the movements must be done with some kind of motorized translation stage. There are different technical options:

Different kinds of motors can be used, depending on the required travel range, accuracy, speed, etc.

For highest accuracy and repeatability, some devices are a equipped with an optical interferometer, with which the control electronics can accurately monitor the position of the drive and correct it with a feedback loop.

For beam alignment purposes, some delay lines have removable irises for defining the correct beam positions.

Usually, a free-space delay line should be operated with a collimated beam having a beam radius which is large enough to obtain a Rayleigh length which is well above the path length, so that the beam radius does not undergo large changes during the passage through the device, and most importantly the beam radius and wavefront curvature of the output beam do not change substantially with changes of the delay. For example, a delay line for a 1550-nm beam with a maximum delay of 1 ns, corresponding to ≈300 mm, the beam radius should be of the order of 1 mm, which would result in a Rayleigh length of ≈2 m.

In optical fiber communications, for example, delay lines with fiber-optic connectors are required.

For a fixed time delay, such a device may simply contain some length of optical single-mode fiber which is wound up to a coil and placed in a more or less compact housing. Since propagation losses in fibers can be rather low, particularly at the typical telecom wavelengths, even fiber lengths of multiple kilometers, corresponding to delay times of many microseconds, can be realized without excessive insertion loss.

Variable time delays can be achieved with a fiber stretcher, where some piece of fiber can be more or less stretched in a controlled way, using a piezo transducer. This method, however, is limited to a quite small time delays, typically below 1 ps. Some are only used as phase shifters, providing a delay range of little more than one wavelength.

For longer time delays (e.g. tens or hundreds of picoseconds), one has to resort to free-space solutions, which however can be interfaced with fiber-optic connectors and enclosed in sealed boxes, making them immune to dirt and dust. Typically, such a device contains two fiber collimators around some bulk-optical free-space setup as described above. As an example, Figure 2 shows a solution with two fiber collimators and a retroreflector on a movable stage. A carefully made device design based on high-quality components is required for achieving low insertion loss with little dependence on the delay time.

There are also miniature delay lines, i.e., quite compact devices with fiber connectors on opposite ends, where one can adjust a time delay with some adjustment knob, and there can be an additional lock nut for fixing the obtained delay value. Usually, delay times are adjustable only in a range of a few picoseconds or less.

Beyond the simple operation principles as explained above, one can realize optical delay lines in completely different ways. Some examples are given in the following.

Very long time delays for light can be realized in situations where slow light is obtained, i.e., light with a strongly reduced group velocity (usually in the vicinity of some narrow resonance). The time delay may then also be a tunable in a wide range. However, such delay lines usually work only within a very narrow optical bandwidth, except if very small structures are involved, e.g. in photonic metamaterials.

Some common-path interferometers are based on birefringence. Based on an adjustable amount of birefringence, obtained e.g. by moving a wedged birefringent crystal [4] more or less into a beam, one can realize a kind of optical delay line within a particularly stable interferometer setup.

Switching between two different time delays as possible if the polarization direction of light propagating in a birefringent medium is manipulated.

A tunable all-fiber delay line for applications in optical coherence tomography has been realized based on chirped fiber Bragg gratings which are stretched with piezo transducers [2].

One may also exploit optical resonance effects. For example, there are the devices where low-loss microring resonators are coupled to a waveguide and cause substantial modifications of the group delay [5]. For small resonators as realized on photonic integrated circuits, this can work in a substantial optical bandwidth. Tuning is possible through the device temperature, for example.

The performance of a variable optical delay line can essentially be characterized with specifications for the following aspects:

Some of those quantities are relevant only for delay lines which can be arbitrarily set to different positions, rather than only continuously scanning. For fiber delay lines, other aspects may also be important, e.g. the chromatic dispersion and fiber nonlinearities causing self-phase modulation, also possibly the preservation of polarization.

Many delay lines are connected to some computer or other electronic control apparatus, usually with a digital bus system such as RS-232 or USB. They can often be entirely controlled through a computer, either manually e.g. with some Windows user interface or automatically.

For devices where one can set arbitrary delay values, the current value may be displayed on the computer screen, and new values may be either entered numerically or changed in certain steps. There are also delay lines where a position display and possibly other features are located on the housing of the delay line itself.

There are optical delay lines where one intentionally uses a large amount of chromatic dispersion in order to obtain a substantial wavelength dependence of the delay time. For example, a long optical fiber can be used as a dispersive delay line for ultrashort pulses; typical dispersion values are of the order of plus or minus some tens of picoseconds per nanometer and kilometer. For broadband pulses, e.g. with an optical bandwidth of the order of 100 nm, relative time delays of several nanoseconds within the optical spectrum are possible in a 1 km long fiber. As a result, one obtains chirped pulses with strongly increased pulse duration. That can be useful, for example, for pulse stretchers as required for chirped-pulse amplification.

A very large amount of chromatic dispersion in a short propagation length can be realized with a chirped fiber Bragg grating.

Dispersive optical delay lines can also be realized based on diffraction gratings, possibly complemented with additional optical elements such as lenses.

Delay lines have long been used in microwave technology. In the modern field of microwave photonics, utilizing photonics in combination with microwaves, one may utilize the superior properties of optical delay lines for effectively realizing delay lines for microwave devices. For that purpose, one can convert microwave signals to optical signals, send them through a fiber-optic delay line and finally convert them back to microwaves with a fast photodetector.

One of the possible advantages of that approach is that very much longer time delays can be realized, since optical fibers provide low propagation losses and can be strongly curved to form compact coils.

The RP Photonics Buyer's Guide contains 17 suppliers for optical delay lines. Among them:

With multi-MHz laser sources with pulse durations starting from 60 fs, the Dazzler becomes an ultrastable and ultrafast delay line. Multi-kHz scan rate within a compact crystal module. No moving parts, no hysteresis. 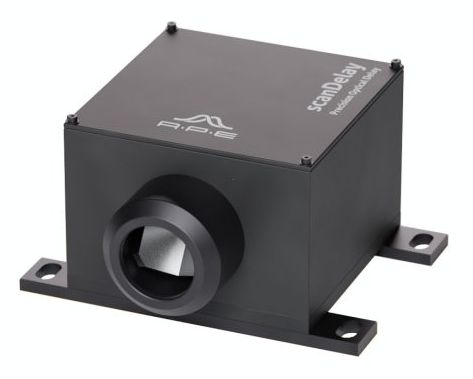 The APE ScanDelay is a variable optical delay line, allowing the introduction of a well-defined time delay into an optical path – for example, for pump–probe measurements. The delay is periodically controlled by a fast scanning shaker at a frequency of up to 20 Hz.

The heart of APE’s optical delay line series is a special linear translation stage that is supplied together with appropriate control and drive electronics. The linear drive has been designed especially for optical applications. It combines low moving mass with compactness, reaching a high speed, as well as high precision and resolution. The delay drive has frictionless movement, a large and precise travel range, and it allows for very small displacements without any stick-slip-effects.

The control electronic contains the motion driver and a quartz stabilized signal synthesizer. It can be synchronized with an external clock for a precise, phase-locked scanner movement.