In this article, different classes of optical materials are described, and their most important properties are explained.

Only in few cases, one uses pure materials with very few chemical constituents; the most prominent example is fused silica glass (silicon dioxide, SiO2), which is widely used for bulk optics. It is also used in the form of silica fibers; here, however, the fiber core is usually doped with some other material, e.g. with germanium.

There are also many silicate glasses, where various other mineral substances are mixed with silica to obtain glasses with modified properties:

Some glass types used in optics and photonics contain poisonous substances like lead and cadmium. Although that hardly creates hazards during use, since those substances are tightly bound in the glass, there are serious attempts to ban their use wherever possible, since it is hard to ensure that those materials are properly handled after use so that they cannot get into the environment.

For further details, see the article on optical glasses.

One reason to use crystals instead of glasses can be to obtain an extended spectral transmission range. This is particularly so in the mid and far infrared, where there is a limited choice of materials with good transparency.

In some cases, optical anisotropy is required, for example in the form of birefringence, which is obtained for crystalline materials with not too high crystal symmetry. For example, polarizers and other types of polarization optics are made from calcite crystals. Also, the Pockels effect, as exploited in electro-optic modulators, occurs only in crystalline materials. Other crystal materials (but also glasses) are used in acousto-optic devices.

Further, there are various types of laser crystals which are crystalline insulators doped with laser-active ions (→ doped insulator lasers). Here, not only the optical properties are of interest. It is particularly important how the laser-active ions interact with the host glass; the properties of the pump and laser transitions can strongly depend on the glass type.

Other doped crystals are used as saturable absorbers, e.g. for Q switching of lasers.

Finally, various crystal materials of low crystal symmetry are used for nonlinear frequency conversion, based on their χ(2) nonlinearity.

Optical crystals, particularly those without special dopants, are highly pure materials with very consistent optical properties – in contrast to glasses, where the exact composition of the used raw materials may somewhat vary, and there are certain fluctuations of the local chemical composition.

Semiconductors are not transparent in the visible spectral region, because their band gap energy is smaller than the photon energy of visible light. However, they exhibit good transparency in the infrared. For example, silicon, germanium and gallium arsenide are used for infrared optics. The refractive index is usually rather high.

In some cases, semiconductor materials are used for infrared optical windows. However, there are also applications where special optical properties of semiconductors are exploited. For example, there are nonlinear frequency conversion devices with quasi-phase-matched gallium arsenide. There is also the whole research area of silicon photonics, involving integrated optics on the basis of silicon.

Polycrystalline materials have found some applications in optics. Their basic challenge is the light scattering at grain boundaries. However, certain transparent ceramic materials like alumina (Al2O3) and yttrium aluminum garnet (YAG = Y3Al5O12) have been developed with good optical quality including low scattering losses; this can be achieved if the used materials are very pure and the particles of the raw material have very small dimensions, so that the grains also become very small (with nanometer dimensions). Another important factor are long operating wavelengths (i.e., for infrared optics), since scattering becomes rapidly stronger at shorter wavelengths.

The optical properties of ceramics can be similar to those of glasses. Therefore, ceramic materials can be used for many types of optical components such as lenses, prisms, optical windows, etc. For example, one can use ceramic windows for thermal imaging and night vision devices.

For lasers, YAG (yttrium aluminum garnet) ceramics have been developed, which can also be doped e.g. with neodymium. The obtained laser gain medium are very similar to Nd:YAG single crystals but can be cheaper, particularly when large dimensions are needed. See the article on ceramic gain media for more details.

An advantage of ceramics over single crystals is that (similar to glasses) they can be made with very large dimensions without a time-consuming crystal growth procedure.

Various polymeric materials (plastics) exhibit good transparency, mostly in the visible spectral range and to some extent in the infrared. Since they are amorphous, they are also called organic glasses. For various applications, they have a number of attractive properties:

On the other hand, the achievable optical quality is generally lower than with glasses. Also, plastic objects are relatively sensitive to temperature changes. For applications with lasers, they are often not suitable. Typical applications are ophthalmology, miniature photo cameras and optical data storage.

See the article on plastic optics for more details.

Various transparent materials are used for making dielectric coatings, i.e., anti-reflection coatings, mirror coatings and others for thin-film polarizers. In the simplest cases, a thin film of one material only may be sufficient e.g. as an AR coating, if its refractive index is roughly the square root of the refractive index of the substrate material. In other cases, multilayer coatings are fabricated. Mostly, one uses amorphous dielectric materials, although there are also crystalline mirrors with semiconductor multilayer structures, which are produced with totally different techniques.

Apart from the optical properties it is important that the materials are suitable for use in certain deposition processes. They should easily and consistently form high-quality layers with good thickness uniformity, high optical homogeneity, low scattering and absorption losses and good adhesion to the substrate.

Some common coating materials are not ideal in all respects. For example, titanium dioxide (TiO2) is often used as a high-index material in multilayer coatings, but depending on the deposition process, different densities of that material may result. Low-density variants not only have a lower refractive index, but are also more sensitive to environmental conditions; in particular, water vapor may be absorbed, and that modifies the optical properties of the coating. Other materials like silica are much less sensitive to such effects. There are also deposition methods (e.g. IAD = ion-assisted deposition) which produce relatively dense coatings even with TiO2.

In any case, one should be aware that the refractive indices can vary to some extent, depending on the used deposition method and even on the environmental conditions during operation.

The following properties are usually relevant for the use of optical materials:

Various other properties can also be relevant for applications:

Metals are mostly used for reflectors (mirrors). Often, they are applied only in the form of thin films deposited on dielectric materials (→ metal-coated mirrors). In other cases, solid metal parts with polished surfaces are used as a very robust reflectors, for example in certain high-power lasers.

Frequently used metals for applications in reflectors are gold and silver, aluminum, chrome and various nickel/chrome alloys. They are mostly made as first surface mirrors. In some cases, metal surfaces are protected with additional transparent coatings; for example, there are protected silver coatings, which are much less sensitive e.g. against touching the surface with a finger.

There are certain artificial photonic metamaterials, which can have very unusual optical properties. For example, some of them have a negative refractive index.

The RP Photonics Buyer's Guide contains 134 suppliers for optical materials. Among them:

Whether your application works in the visible, ultraviolet (UV), near-infrared (NIR) or infrared (IR) spectrum, we have a wide variety of wavelength-specific substrates for customisation or from our extensive stock range. From BK7 (or equivalent), UV-grade fused silica and quartz to germanium, sapphire and zinc selenide – plus many more substrate alternatives – our components are capable of meeting any requirement. 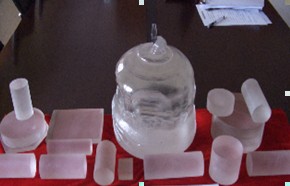