Various properties of light can be addressed with certain kinds of optical sensors:

In this section, sensors are explained which measure non-optical properties based on a measurement principle which involves the use of light.

Optical sensors can have substantial advantages over competing technologies, for example concerning performance or the usability under extreme conditions.

Such sensors are competing with other sensor technologies, e.g. based on purely electronic means. Compared with those, optical sensors are often more expensive, but may nevertheless be preferable due to specific advantages. For example, for sensing applications in specific harsh environments exhibiting complicating aspects such as intense electric fields, radio waves or extreme temperatures, it can be advantageous to have a relatively robust and non-conducting sensor element such as an optical fiber, possibly containing a fiber Bragg grating. Such types of sensors can work without creating insulation problems or explosion hazards, requiring electrical power at an inconvenient location or being excessively influenced by certain disturbances in the surroundings. Another aspect is the sometimes superior performance, for example the extremely high resolution with which mechanical strain can be measured, particularly in case of interferometric sensors.

In some cases, one uses an optical sensing instrument to which one or several external optical sensors are connected. For example, one may have multiple or even many fiber Bragg gratings incorporated in a long optical fiber, or use a kind of distributed sensing along the whole length of fiber. A possible measurement principle is to infer locations from the arrival times of pulse signals, utilizing the finite velocity of light. Such a distributed sensor system can also be substantially more economical than a system being based on a long chain of electronic sensor elements, requiring many electrical cables or a sophisticated electronic bus system.

In the following, we discuss the most common types of optical sensors (grouped by the measured quantities) without striving to generate anything close to a complete overview of sensor technologies, as this is a huge field.

Sensors based on the principle of a light barrier are often used for detecting the presence of persons or some other objects. Here, one sends a light beam, e.g. a laser beam from an infrared laser diode, through a certain area and detects the arriving beam, which may e.g. be blocked by a person entering the area.

Fiber-optic sensors for strain, displacements, tilts, rotation, forces and acceleration have become quite common and can have amazing performance figures.

A wide range of optical sensors can be used for measuring and monitoring mechanical quantities such as forces, displacements and tilts (= rotational position changes), and strain. They can be based on very different measurement principles. For example, position changes can be very accurately monitored with various kinds of interferometers, which may be realized either with bulk optics or with fiber optics. The same principles can be employed for measuring mechanical forces, because those can easily be converted into displacements, using the elastic deformation of some mechanical part. Similarly, accelerations can be measured e.g. through the relative motion of a test mass or through inertial forces. Also, there are various methods of sensing vibrations, partly with high temporal resolution and sensitivity. For sensing rotations, there are optical gyroscopes, e.g. based on ring lasers, which can be extremely sensitive.

Many of those devices are realized in the form of fiber-optic sensors – often but not always utilizing fiber Bragg gratings. Frequently, such sensors are also sensitive to temperature changes, but there are various ways of separating such influences; in fact, there are many sensors which simultaneously can measure strain and temperature, for example. A frequently used technique is to utilize two identical fiber Bragg gratings, where both gratings are exposed to the same temperature, but only one of them to a certain strain. See the article on fiber-optic sensors for more details.

The probably most frequently used technology for optical temperature sensors is based on fiber Bragg gratings. Here, the narrow reflection peak of such a grating has a peak wavelength which significantly depends on the temperature. It is not a problem that it also can be influenced by strain, if such mechanical influences are avoided with suitable packaging.

See the article on fiber-optic sensors for more details.

Fire can be detected in different ways:

Chemical sensors may react to the concentration of a certain substance or to some chemical parameters such as the pH value, indicating the degree of acidity. Various types of optical sensors have been developed which can be used for such purposes. They can be based on very different operation principles:

Sensors for Electric and Magnetic Quantities

There are various ways in which electric quantities can be monitored with optical means. For example, the refractive index of certain crystal materials depends linearly on the applied electrical field strength. That electro-optic effect can be utilized for electro-optical sampling, e.g. in investigations of certain electronic chips.

Similarly, one can exploit the Faraday effect for optical sensors addressing magnetic fields. Since magnetic fields are often generated by electrical currents, that can also be used to make current sensors, which can be advantageous e.g. for measuring currents in harsh high-voltage environments such as ultrahigh voltage power transmission systems, including sub-surface cables.

The RP Photonics Buyer's Guide contains 44 suppliers for optical sensors. Among them: 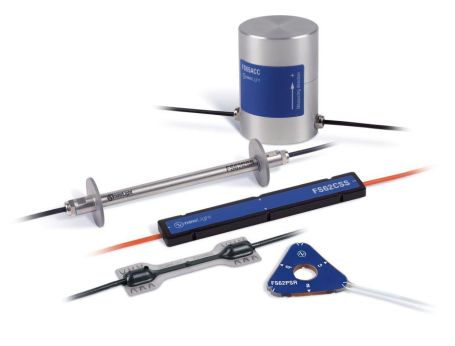 The newly developed optical sensor line newLight enables large strain measurement ranges at increased long-term stability. It is the ideal choice for structural health monitoring due to its fast and easy installation and its resistance to environmental conditions such as humidity, rust, and salt even over extremely long distances.

The compatibility with standard telecom cables makes this line very cost efficient – especially for medium-to-high channel applications. The newLight range is based on the Fiber Bragg Grating technology and offers optical sensors for measurements of strain, temperature, accelerometer, and tilt.

In addition to fiber optical sensors that measure strain, temperature, acceleration, tilt or displacement, HBM also offers optical interrogators, software, as well as service and support for every application. 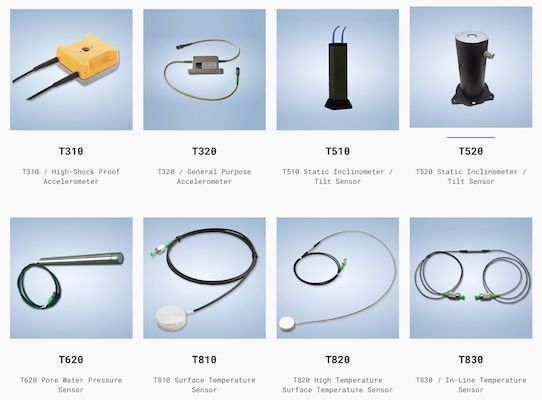 Our fiber Bragg grating based packaged sensors are available in a wide range of optical specifications and mechanical configurations. For custom OEM sensors, our company works closely with each customer to optimize the packaging for the sensors they would like to have manufactured by us. Technica undertakes a rigorous development process before products release. We are committed to continuous improvements after release to insure performance to the highest of standards.

See also: fiber-optic sensors
and other articles in the category photonic devices