Many fiber-optic sensors for measuring temperatures are based on fiber Bragg gratings (FBGs). The operation principal is essentially based on the fact that the temperature affects the Bragg wavelength, i.e., the wavelength of peak reflectivity. The change of Bragg wavelength caused by changes a temperature change ΔT and the strain ε is [4]:

The combination of two different effects determines the temperature sensitivity: thermal expansion, which is quantified with the thermal expansion coefficient α, and the change of refractive index.

An optoelectronic interrogator is used, which sends light to the grating sensor and analyzes the reflected light in order to determine the amount of strain. An external-cavity diode laser is suitable as a light source, for example.

For measuring the temperature of some object, one needs to attach an FBG-based sensor to the component such that it acquires the same temperature. Some sensors are attached with glue, screws or similar means, while others are embedded in some materials.

As the equation above shows, the Bragg wavelength of such a grating is also sensitive to mechanical strain. Therefore, one needs to take care that the measured signal really reflects the temperature and is not affected by strain. The simplest method, which however may require some care, is to mount the grating such that it is kept loose and will not be strained.

How to separate temperature and strain effects?

Another possibility is to expose the grating to both temperature and strain, but to employ some method to separate the two effects. For example, one may use two very different interrogation wavelengths (e.g. in the 0.8-μm and 1.5-μm region), leading to different ratios of strain and temperature responses. With such techniques, one can simultaneously measure temperature and strain.

Note that the encoding of temperature via optical wavelengths makes such sensors insensitive to other parameters such as losses of optical power along the fiber or the output power of the interrogator.

Quasi-distributed sensors can be implemented in economical ways.

A very attractive feature of the FBG-based sensor technology is that one can make quasi-distributed sensors with many such gratings in a long optical fiber, and use a single interrogator which can address all the different gratings with some kind of multiplexing. Signals from different gratings can be distinguished in different ways:

Compared with using many independent sensors, the cost of such multi-point sensors can be much lower, because the installation of sensors and cables is simplified and a single interrogator can be used.

In some cases, one uses a pair of Bragg gratings forming Fabry–Pérot interferometers, where one measures the temperature in the fiber between the gratings via shifts of resonance frequencies. One may again use multiple sensors of that type in one fiber, when using gratings with different Bragg wavelengths. Alternatively, one may measure the average temperature in a long piece of fiber.

One can construct small Fabry–Pérot interferometers, where the small mirror distance (e.g. 50 μm) is affected by the temperature to be measured via thermal expansion of some material. Therefore, the peak transmission wavelength will indicate the temperature. Instead of the transmission, one may monitor the drop of reflectivity in resonance. The probe light end the reflected light can be sent through a single-mode fiber for highest convenience. As the fiber is only used for transporting the light, but not for the actual sensor, this technology is called extrinsic fiber sensor – in contrast to intrinsic sensors where the fiber itself acts as a sensor.

Micro-Fabry–Pérots can be produced in different ways, e.g. by maintaining an air gap between two fiber ends with some mechanical part (e.g. a micro-tube), or by using two fusion splices which are made reflective e.g. by applying dielectric coatings to the fiber ends.

Micro-Fabry–Pérot sensors can be made to operate at even higher temperatures than possible for FBG-based sensors, where annealing of the grating may occur. On the other hand, it is not easily possible to use multiple sensors of that type in a single optical fiber.

Distributed fiber-optic temperature sensors can be realized with ordinary single-mode fibers, not containing any special structures such as fiber Bragg gratings. In many cases, one uses telecom fibers, operated in the 1.5-μm spectral region.

For temperature sensing in longer fibers, one usually uses techniques based on spontaneous Raman scattering. One exploits the fact that the ratio of anti-Stokes to Stokes scattered light powers is substantially temperature-dependent:

where Δν is the magnitude of the used frequency offsets of Stokes and anti-Stokes light from the pump light. For silica fibers and measurements with a wavenumber shift of ±400 cm−1, that ratio is ≈0.15 and exhibits a temperature dependence of ≈0.8%/K [3].

The interrogator needs to send short pump pulses into the fiber, e.g. with durations of a few nanoseconds, and then detect the back-scattered light. Here, the strongest back-scattered component which results from Rayleigh scattering must be filtered out, and one needs to measure the powers of wavelength components just above and just below the pump wavelength (with offsets of a few tens of nanometers) in order to determine the power ratio, which is temperature-dependent according to the equation above. In order to obtain the spatial resolution, the power measurements must be temporally resolved. As light travels over roughly 20 cm within 1 ns, with 10-ns pulses, for example, one can achieve a spatial resolution of the order of 1 m. (Note that a factor of 2 comes from the fact that light needs to travel in both directions.)

The pump pulses may be generated with a pulsed laser diode, and for enhanced sensitivity of the measurements they can be sent through a fiber amplifier before getting into the sensor fiber. The detection can be done with avalanche photodiodes. The interrogator may have to apply corrections for the wavelength-dependent propagation losses of the scattered light in the fiber.

When using spontaneous Brillouin scattering, a challenge is that the spontaneous scattering rate is much weaker than for Raman scattering, and at the same time the frequency offsets are much smaller, so that it is more difficult to filter out Rayleigh-scattered light. However, the sensitivity can be greatly enhanced by using stimulated Brillouin scattering. The method is called Brillouin optical time delay analysis (BOTDA). Here, an additional weak continuous-wave probe beam is used, which is propagating in the opposite direction to the picosecond pulses. Its optical frequency is chosen somewhat below the frequency of the pulses. The probe beam is then amplified at locations where the optical frequency difference between the pulses and the probe beam coincides with the local Brillouin shift (depending on strain and temperature). (Alternatively, one may obtain nonlinear losses for the probe beam when its frequency is higher than the frequency of the pulses.) Such measurements are performed with a variable optical frequency difference, and by combining those data one can effectively obtain a map of the Brillouin frequency vs. position.

Temperature sensors can also be based on measuring the intensity of thermal radiation emitted by objects. Typically, one measures the intensity of infrared radiation with a kind of infrared detector which is made in sensitive to light at wavelengths, e.g. from illumination. This measurement principle can be used for point sensors, but also for imaging devices. For more details, see the article on thermal imaging.

Optical temperature sensors are widely used for measurements in technical installations such as industrial processing plants, bridges, tunnels, mines, buildings, oil and gas pipelines and power transmission lines. They are useful e.g. for reliably identifying unusual conditions, for example temperature rises caused by fire. The ability of distributed sensing with a long optical fiber is also often of high importance. Sometimes, one profits from the simultaneous measurement of strain.

The RP Photonics Buyer's Guide contains 10 suppliers for optical temperature sensors. Among them: 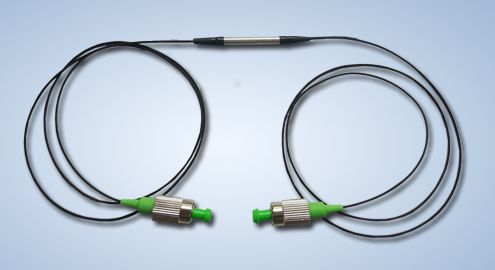 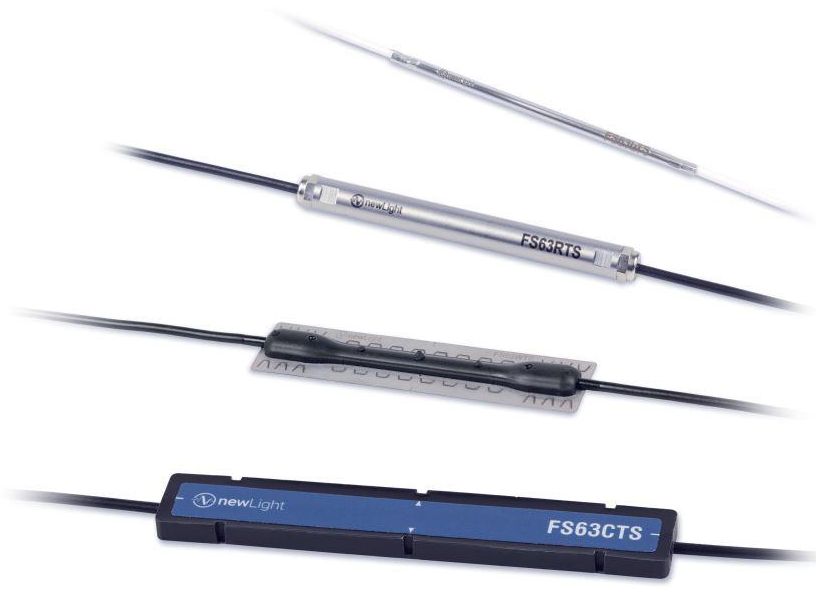 The newLight FS63 optical temperature sensors are based on the Fiber Bragg Grating Technology (FBG) and designed to accurately retrieve temperature measurements in large structures and machines without interferences from external noise. Furthermore, their small size and lightweight structure makes them the ideal choice for hard-to-reach locations and measuring points granting low transmission losses even under harsh environments.