Opto-mechanics means mechanical elements which are used in optics. The following product categories belong to opto-mechanics:

Some opto-mechanics are sold separately, while other items are parts of more complex setups. Some examples:

Some types of optical set ups require a very high quality of the used opto-mechanics.

The requirements concerning accuracy and stability depends very much on the application. Some cases are not critical, for example the positioning of a nonlinear crystal with noncritical phase matching. In many cases, the transverse positioning of a lens is also not very critical. Particularly critical are applications in interferometers, where e.g. thermal induced length changes far below one micrometer can already have substantial impact on the performance. Also, laser resonators (particularly those for high-power lasers) require very precise and stable mirror mounts (see below), because they often exhibit a substantial alignment sensitivity. For such applications, fine mechanics of particularly high quality are required.

The requirements on opto-mechanical elements can be quite different depending on whether they are used in the context of building prototypes or permanent optical setups. Therefore, quite different realizations can be appropriate.

For prototyping, maximum flexibility is usually essential; one may frequently need to insert or remove optical elements, change their positions, etc. On the other hand, cost is less critical, since only low numbers of parts are handled. Also, uttermost mechanical stability and long lifetimes may not be critical for experimental tests, e.g. because the work can be done in a low-vibration environment.

Permanent setups usually do not need a substantial amount of flexibility, but have other requirements such as the ease of fabrication (possibly involving robots), low cost, high robustness and long lifetime.

Optical breadboards and optical tables are flat platforms containing a regular grid of threaded mounting holes for fixing various types of optical mounts or posts. They are particularly suitable for making optical prototype devices, and even some industrial devices are based on an optical breadboard, possibly integrated in some housing. Optical breadboards and tables should be very stiff and should exhibit well damped mechanical resonances. Optical tables usually rest on legs containing pneumatic vibration dampers.

One may directly fix an optical mount on a breadboard, but frequently one uses a post in between them, which also gives some flexibility concerning the height.

There are various optical rail and cage systems which allow one to move optical elements only in one direction – typically, along some optical axis. For example, one may mount a laser diode, a beam collimator, additional lenses, an aperture, a sample holder, a polarizer and an image sensor in such a rail system. Ideally, an optical rail system is designed such that one can easily insert additional mounts, even with close distances between them, and at the same time it is guaranteed that the angular orientation of elements is very stable even after movements along the axis. There are some trade-offs, however; for example, a high angular precision may require longer mounts which prohibit close mounting of components. Also, magnetic mounts allow easy mounting without turning screws, but are tentatively less precise. Cage systems can be mechanically more stable than rails, but make it more difficult to insert additional elements.

A linear translation stage allows one to move objects over some distance along a straight line. For example, one may fix such a stage on a breadboard and mount a post and a dual mirror holder on it in order to realize an optical delay line. In other cases, one inserts a second linear translation stage, mounted at 90° against the other one, to allow for positioning in two dimensions. For example, such arrangements are used in fiber launch systems.

There are also rotation stages, which can be used for example for positioning a nonlinear crystal with critical phase-matching, or adjust the orientation of a polarizer.

Instead of micrometers screws for manual actuation, translation stages can contain highly precise motors. For example, there are various types of piezo motors and step motors which can do quite precise movements. Sometimes, the position is further improved with a feedback loop. The maximum range of translation, the speed and accuracy of movement can be critical performance factors.

A large variety of mounts for different kinds of mirrors are available, mostly for those with cylindrically or rectangular shaped mirror substrates of certain standard sizes. For example, cylindrical mirrors with a diameter of 1 inch (≈25.4 mm) are particularly common. In most cases, a mirror mount fully encloses the mirror, but there are also clear edge designs with better access at least on one side. There are also corner mirror mounts which fully surround the mirror, but which on most sides block only a quite small area around it, because most of the holder sits in one corner of the mirror.

There are simple fixed mirror mounts, where one can simply insert a mirror, fix it (e.g. with some nylon-tipped screws) and then screw the mount to an optical breadboard, for example. This approach does not allow for precise alignment. However, it is often not required to have all mirrors in an optical setup precisely aligned.

For some mirrors in an optical setup, mirror mounts need to offer precise adjustment options for the angular orientation. Typically, such a kinematic mount has two or even three precise micrometer screws. Cheaper holders are made of aluminum, which can be processed relatively easily but is not as stiff and precise as stateless steel, for example. Apart from the basic construction material, various design details can be quite relevant for the mechanical performance – for example, concerning thermally induced drifts or mechanical vibrations. The quality of used micrometer screws can also be relevant; low quality micrometer screws do not have a high resolution, may exhibit some degree of hysteresis, and they may no more allow for smooth movements after a couple of years. Overall, a substantial technical expertise is required to fabricate high quality mirror mounts.

Ordinary mirror holders with two micrometer screws normally cause a rotation with a fixed point outside the mirror surface. If this is a problem, one may use a gimbal mount, which can have a fix point at the center of the mirror surface. This allows one to adjust the beam orientation without modifying the position of the reflection point, if that point is at the center.

Various kinds of specialized mounts are also obtainable, for example for mounting two or more mirrors with a fixed relative angle. For example, a mount for two mirrors with 90° relative angle is useful for realizing an optical delay line; it can be more compact, more convenient and cheaper than using two separate standard mirror holders.

Depending on the application, special requirements may apply to the used opto-mechanics. Some examples:

A general difficulty with opto-mechanics is that clear performance specifications are often not available. For example, some mirror mounts may be advertised as “low-drift” items, but with no qualitative or even quantitative description of what that means. The same applies to aspects like vibration damping or lifetimes of positioning equipment. Therefore, opto-mechanics often need to be selected based on vague indications and trust into a certain manufacturer.

The RP Photonics Buyer's Guide contains 84 suppliers for opto-mechanics. Among them:

Shanghai Optics Inc has more than 55 years of experience in designing and manufacturing opto-mechanical products. We offer cost-effective solutions and fast delivery services for our customers. Our engineering design experience and streamlined production methods help us create optimum design and production processes. Comparing with other optical manufacturers, we provide:

- 20% faster time to delivery for research and engineering projects

- 20% to 30% faster time to market for manufactured products 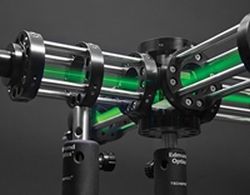 Edmund Optics offers a wide range of optomechanics that are ideal for many optical applications. The TECHSPEC optical cage system provides excellent versatility as well as easy assembly of any number of optical system configurations. Kinematic mounts or translation stages are available to ease system adjustment or positioning. A wide selection of optomechanical accessories or adapters is also available to increase system compatibility, modularity, or versatility.