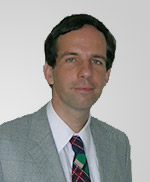 Dr. Rüdiger Paschotta has an international reputation as a distinguished expert in technical areas such as lasers and amplifiers, nonlinear optics, fiber technology, ultrashort pulses, and noise in optics. He is author or coauthor of many publications, in particular of over 100 articles in scientific journals, over 120 presentations at international conferences, and of several books and book chapters. Also, he is the author of the well-known RP Photonics Encyclopedia.

Dr. Paschotta originally started his career in scientific research. In 2002, he achieved the habilitation at ETH Zürich and received the Fresnel Prize of the European Physical Society (EPS) in 2002. Despite his success as a researcher (see his CV with publication list), in 2004 he started the company RP Photonics Consulting GmbH in Zürich, Switzerland. (The company moved to Bad Dürrheim, Germany, in 12/2010.) He serves companies in the photonics industry worldwide. Typical tasks are to work out feasibility studies and designs for lasers and other photonic devices, to identify and solve technical problems, to find suitable laser sources for specific applications, and to do tailored staff training courses on specialized subjects. Dr. Paschotta regularly achieves very high levels of customer satisfaction.

With Dr. Rüdiger Paschotta, you can get a technical consultant

(You can also download a Powerpoint presentation on the main scientific achievements of Dr. Paschotta.)

The by far most well-known publication of Dr. Paschotta is the RP Photonics Encyclopedia (formerly the Encyclopedia of Laser Physics and Technology), a freely accessible encyclopedia for photonics and laser technology. It is also available as a two-volume book.

You can obtain the complete CV with publication list as a PDF document. See also the list of recent publications.

Despite having left an academic career, Dr. Paschotta continues to stay active in the scientific world. In this way, he stays fully up to date in a wide range of topics and maintains useful relations. See the list of recent publications.

Dr. Paschotta remains actively involved in academic research, maintaining relations to various research groups and working in joint projects. This will be apparent from further scientific publications. For example, an article on resonator designs for optimum beam quality of lasers has been published: R. Paschotta, Opt. Express 14 (13), 6069 (2006), doi:10.1364/OE.14.006069. Another one treats the noise properties of mode-locked fiber lasers: “Timing jitter and phase noise of mode-locked fiber lasers”, Opt. Express 18 (5), 5041 (2010), doi:10.1364/OE.18.005041.

Dr. Paschotta continues to regularly read a number of scientific journals in the areas of laser physics and development, nonlinear optics, fiber technology, and alike. Also, he attends scientific conferences. He stays fully up to date in laser research.

Acting as a Referee