Photodiodes are frequently used photodetectors, which have largely replaced the formerly used phototubes. They are semiconductor devices which contain a p–n junction, and often an intrinsic (undoped) layer between n and p layers. Devices with an intrinsic layer are called p–i–n or PIN photodiodes. Light absorbed in the depletion region or the intrinsic region generates electron–hole pairs, most of which contribute to a photocurrent. The photocurrent can be quite precisely proportional to the absorbed (or incident) light intensity over a wide range of optical powers.

Figure 1 schematically shows the typical design of the photodiode on p–i–n type. Here, one has an intrinsic region between an n-doped and a p-doped region, where most of the electric carriers are generated. Through the electrical contacts (anode and cathode), the generated photocurrent can be obtained. The anode may have a ring shape, so that the light can be injected through the hole. A large active area can be obtained with a correspondingly large ring, but that tends to increase the capacitance, thus reducing the detection bandwidth, and increases the dark current; also, the efficiency may drop if carriers are generated too far from the electrodes.

For a high responsivity, one should have a material with a strong absorption for the optical wavelength of interest. When using a thicker layer for obtaining efficient absorption, one may lose a lot of the generated carriers.

Some photodiodes are available in the form of photodiode arrays, mostly of one-dimensional kind.

For substantially increased responsivity, one may either use avalanche photodiodes (see below) or phototransistors.

Photodiodes can be operated in two very different modes:

Simple photodiode circuits lead to RC-limited detection bandwidth, which introduces a trade-off between bandwidth and sensitivity.

In the simple circuit according to Figure 2, the magnitude of the bias voltage drops with increasing photocurrent due to the voltage drop at the load resistor. While that has little influence on the linearity, it leads to a charging or discharging of the photodiode's capacitance whenever the incident light intensity changes, so that the detection bandwidth often becomes RC-limited. That introduces a trade-off between detection bandwidth and responsivity: a high bandwidth requires a small load resistor, which leads to a low responsivity and also a higher noise-equivalent power, which is often limited by thermal noise (Johnson noise) of the load resistor.

In order to avoid that trade-off, one often uses a current amplifier (also called transimpedance amplifier). Such an amplifier, which is typically realized with an operational amplifier (op-amp), keeps the voltage at the diode nearly constant (e.g. near zero, or at some possibly adjustable reverse bias), so that the photodiode's capacitance loses much of its relevance. The residual voltage variations at the photodiode are inversely proportional to the gain of the used operational amplifier. Still, it is good to minimize the input capacitance and requiring maximum bandwidth; for example, it is better to directly connect a photodiode to the current amplifier, instead of using a long cable connection.

Current amplifiers, which are also available as OEM devices, can also have very good noise properties. The relevant figure is the noise-equivalent input current, which can be well below 1 pA/Hz1/2.

The indicated wavelength ranges can sometimes be substantially exceeded by models with extended spectral response.

The most important properties of photodiodes are:

Additional quantities may be of interest:

The speed (bandwidth) of a photodiode is typically limited either by electrical parameters (capacitance and external resistor) or by internal effects such as carrier transit time in the depletion region. (In some cases, relatively slow diffusion of carriers generated outside the depletion region limits the bandwidth.) The highest bandwidths of tens of gigahertz are usually achieved with small active areas (diameters well below 1 mm) and small absorption volumes. Such small active areas are still practical particularly for fiber-coupled devices, but they limit the photocurrents achievable to the order of 1 mA or less, corresponding to optical powers of ≈ 2 mW or less. Higher photocurrents are actually desirable for suppression of shot noise and thermal noise. (Higher photocurrents increase shot noise in absolute terms, but decrease it relatively to the signal.) Larger active areas (with diameters up to the order of 1 cm) allow for handling of larger beams and for much higher photocurrents, but at the expense of lower speed.

The quantum efficiency of a photodiode is the fraction of the incident (or absorbed) photons which contribute to the photocurrent. For photodiodes without an avalanche effect, it is directly related to the responsivity S: the photocurrent is

In some cases, additional properties of photodiodes have to be observed, such as linearity of response over a wide dynamic range, the spatial uniformity of response, or the shape of the dynamic response (e.g. optimized for time domain or frequency domain), or the noise performance.

The noise performance of photodiodes can be very good. For high photocurrents, it can be limited by shot noise, although thermal noise in the electronics is often stronger than that. For the detection of very low light levels (e.g. for photon counting), the dark current can also play a role.

A higher responsivity (although sometimes at the cost of lower quantum efficiency) can be achieved with avalanche photodiodes. These are operated with a relatively high reverse bias voltage so that secondary electrons can be generated (as in photomultipliers). The avalanche process increases the responsivity, so that noise influences of subsequent electronic amplifiers are minimized, whereas quantum noise becomes more important and multiplication noise is also introduced.

A photodiode is sometimes integrated into the package of a laser diode. It may detect some light getting through the highly reflecting back facet, the power of which is proportional to the output power. The signal obtained can be used, e.g., to stabilize the output power, or to detect device degradation.

The electronics used in a photodiode-based photodetector can strongly influence the performance in terms of speed, linearity, and noise. As mentioned above, current amplifiers (transimpedance amplifiers) are often a good choice.

For a particularly high detection bandwidth in the gigahertz region, advanced photodiode designs are used. For example, some devices contain an optical resonator around the thin absorbing section. In that way, one can achieve efficient absorption and thus a high quantum efficiency despite a rather small thickness of the intrinsic region, as is chosen for reducing the drift time.

So-called waveguide photodiodes contain an optical waveguide which leads light along the absorbing region. That absorbing region can then again be very thin, and nevertheless one can obtain efficient absorption in a short length. By minimizing the length of the active region, one can also minimize the electrical capacitance and reach a very high bandwidth.

Some semiconductor materials are intrinsically better suited than others for fast photodiodes. For example, indium gallium arsenide (InGaAs) is particularly suitable, because that direct band gap material (in contrast to silicon, for example) exhibits a rather short absorption length, allowing the realization of very thin absorbing layers, in which the photocarriers can be quickly collected. For fast avalanche photodiodes, it is also important to have a low ratio of the impact ionization coefficients for holes and electrons.

Photodiodes are available not only is single-segment detectors. There are dual and quadrant photodiodes, which can be used for precision sensing, and also one-dimensional and two-dimensional photodiode arrays. For more details, see the article on position-sensitive detectors.

The RP Photonics Buyer's Guide contains 60 suppliers for photodiodes. Among them:

Menlo Systems offers a series of photodetectors for lowest light level signals. From avalanche to PIN photodiodes, you can find the detector that is best for your specific application. 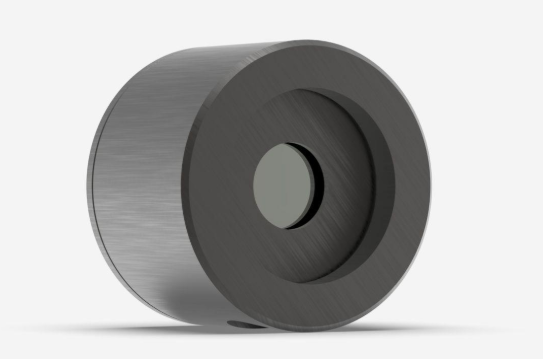 Gentec Electro-Optics offers a great range of power detectors based on silicon or germanium photodiodes for powers up to 750 mW.

Specifications for lasers and other photonics products are essential for the process of buying such things. Nevertheless, many do not properly deal with them:

Our Photonics Spotlight article and our encyclopedia article on laser specifications give you important hints. In case of doubt, contact RP Photonics to get competent and impartial advice.