Photonic integrated circuits (also called planar lightwave circuits = PLC or integrated optoelectronic devices) are devices on which several or even many optical (and often also electronic) components are integrated. The technology of such devices is called integrated optics. Photonic integrated circuits are usually fabricated with a wafer-scale technology (involving lithography) on substrates (often called chips) of silicon, silica, or a nonlinear crystal material such as lithium niobate (LiNbO3). The substrate material already determines a number of features and limitations of the technology:

Photonic integrated circuits can either host large arrays of identical components, or contain complex circuit configurations. However, for various reasons the complexity achievable is not nearly as high as for electronic integrated circuits. Their main application is in the area of optical fiber communications, particularly in fiber-optic networks, but they can also be used for, e.g., optical sensors and in metrology.

An important distinction is that between devices with smaller or larger mode areas:

The RP Photonics Buyer's Guide contains 9 suppliers for photonic integrated circuits. Among them: 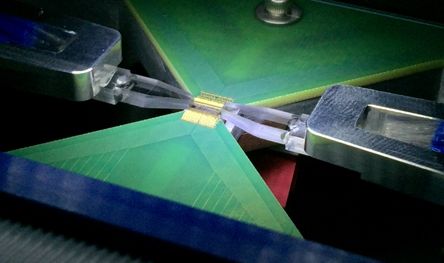 The specific ion-exchange process enables high confinement and variable confinement optical waveguides. These can be tailored into standard and advanced integrated optics products such as the innovative WAFT series solutions for interfacing with silicon photonics. The ioNext technology also allow functions such as splitters, couplers, taps, mux/demux, polarizers and custom devices.