Ask RP Photonics for simulations e.g. on how a Pockels cell will work in your regenerative amplifier concerning pulse switching, dispersive and nonlinear effects, etc.

A Pockels cell is a device consisting of an electro-optic crystal (with some electrodes attached to it) through which a light beam can propagate. The phase delay in the crystal (→ Pockels effect) can be modulated by applying a variable electric voltage. The Pockels cell thus acts as a voltage-controlled waveplate. Pockels cells are the basic components of electro-optic modulators, used e.g. for Q switching lasers.

Pockels cells can have two different geometries concerning the direction of the applied electric field:

An important property of a Pockels cell is the half-wave voltage Uπ (also called Uλ/2 or Vλ/2). This is the voltage required for inducing a phase change of π, equivalent to a half an optical wavelength. In an amplitude modulator, the applied voltage has to be changed by this value in order to go from the operation point with minimum transmission to that with maximum transmission.

For a Pockels cell with longitudinal electric field, the crystal length does not matter, since e.g. a shorter length also increases the electric field strength for a given voltage. Larger apertures are possible without increasing the half-wave voltage.

Typical Pockels cell have half-wave voltages of hundreds or even thousands of volts, so that a high-voltage amplifier is required for large modulation depths. Relatively small half-wave voltages are possible for highly nonlinear crystal materials such as LiNbO3, and for integrated optical modulators with a small electrode separation, but such devices have a limited power handling capability.

Example for Intensity Modulation with a Pockels Cell

As an example, consider a simple intensity modulator based on a Pockels cell, where the input beam has its linear polarization at an angle of 45° against the optical axis of the nonlinear crystal. We assume that the crystal has no birefringence without an applied electric field, and that it has a given half-wave voltage Uπ. Behind the crystal, we have a polarizer which is aligned such that we obtain 100 % transmission (disregarding some parasitic losses) without an applied voltage. In that situation, we can consider the transmitted field to be a superposition of two in-phase field components of equal strength. With an applied electric field, those field components acquire a phase difference of Δφ = π U / Uπ. The total transmitted amplitude is then proportional to 0.5 · (1 + exp iΔφ), and we obtain the following result for the power transmission:

If the polarizer is rotated such that we get zero transmission for zero voltage, the formula contains sin instead of cos.

The RP Photonics Buyer's Guide contains 33 suppliers for Pockels cells. Among them:

G&H are a leading crystal grower with decades of electro-optic device design experience. We manufacture a comprehensive range of Pockels cells for applications in wavelengths from the UV to the IR. Factors such as average power, repetition rate and the design configuration determine the recommended type of device. 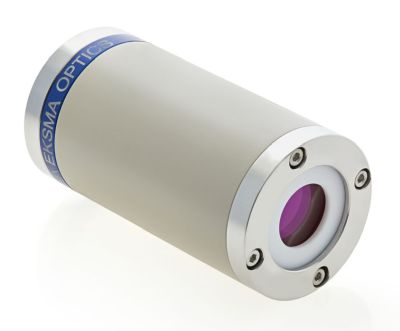 We produce KTP, KD*P and BBO Pockels cells for applications like Q-switching of lasers, pulse picking, laser cavity dumping and coupling laser pulses into and from regenerative amplifiers. Our Pockels cells can be supplied with mounting stages, drivers, power supplies and electronics for pulse picking.

This website is enormously popular. The page views of the encyclopedia and the buyer's guide in the last 12 months:

See also our detailed published data. They are no surprise in the light of the extraordinary Google ranking.

Obviously, it would be a good idea to advertise your photonics products on this site – with enhanced entries in the buyer's guide and with banners at this place here.