Ask RP Photonics to design a periodically poled crystal for phase matching of a given nonlinear interaction.

Quasi-phase matching is a technique for achieving similar results to those with phase matching of nonlinear interactions, in particular for nonlinear frequency conversion. Instead of a homogeneous nonlinear crystal material, a material with spatially modulated nonlinear properties is used. The idea is essentially to allow for a phase mismatch over some propagation distance, but to reverse (or disrupt) the nonlinear interaction at positions where otherwise the interaction would take place with the wrong direction of conversion. In contrast to birefringent phase matching, it is not necessary to have different polarization states of the involved waves; in fact, it is most common to have equal polarization states. (The term “type-0 phase matching” is sometimes used.)

Figure 1 illustrates with the green arrows the complex amplitude contributions from different parts of the nonlinear crystal to the harmonic wave in a frequency doubler. In the case without phase matching, these contributions cannot constructively add up over a significant distance in the crystal. With quasi-phase matching, the sign of the contributions is reversed at a point where they would otherwise diminish the total amplitude. (That is the case after propagation over one so-called coherence length.) In that way, the total amplitude can grow more and more, although not as quickly as it could for real phase matching.

Compared with the perfectly phase-matched case, QPM leads to a lower conversion efficiency if the nonlinear coefficient is the same: the effective nonlinear coefficient deff is reduced by a factor of 2 / π. However, QPM often makes it possible to use the same polarization direction for all interacting waves, and this often corresponds to using a stronger element of the nonlinear tensor. In effect, the conversion efficiency can be significantly higher than for true phase matching. As an example, consider lithium niobate (LiNbO3), where birefringent phase matching usually utilizes the coefficient d31 = 4.35 pm/V, whereas QPM normally uses the higher d33 = 27 pm/V, which effectively results in 17 pm/V taking into account the above-mentioned factor of 2 / π. As the conversion efficiency is usually proportional to the square of the nonlinear coefficient (in the low-conversion regime), the use of d33 results in significant advances in cases where very high optical intensities cannot be used, e.g. due to a limited pump power. QPM is now widely used for frequency doubling (e.g. in green and blue laser sources), and for parametric devices such as optical parametric oscillators.

QPM opens many attractive possibilities. In principle it allows for efficient nonlinear interactions with arbitrarily high “natural” phase mismatch, although a large phase mismatch may lead to impractically small poling periods. Typically, the propagation direction is along a crystal axis (noncritical phase matching), so that spatial walk-off is avoided, and the acceptance angle is large. Further, the quasi-phase matching period can be adjusted in order to obtain a convenient phase-matching temperature. Operation at or near room temperature is therefore often possible without resorting to critical phase matching or noncollinear phase matching. Such options are also important for nonlinear interactions in waveguides, where noncollinear beams and interactions with spatial walk-off usually cannot be used.

Note that it is possible to arrange for multiple quasi-phase-matched nonlinear interactions in a single crystal. This can be achieved e.g. by using periodically poled crystals with multiple poling periods, or by exploiting different orders of phase matching within a single poled structure. (When the duty cycle deviates from 50%, even-order processes also become possible.) Such multiple interactions can be interesting e.g. for realizing compact RGB sources, but they can also occur unintentionally and lead to various parasitic processes.

In some cases, parasitic higher-order processes can be disturbing. For example, relatively strong green light can result from parasitic second-harmonic generation in parametric oscillators and generators made of lithium niobate or lithium tantalate which are pumped in the 1-μm spectral region. This can be detrimental particularly in the context of green-induced infrared absorption (→ photodarkening). On the other hand, weak visible parasitic beams can be helpful for the alignment of such devices.

As a historical note, QPM was invented already in 1962 [1], but could not be used at that time because suitable fabrication techniques (see below) had not then been developed. Therefore, birefringent phase matching was for a long time the only used technique. In the 1980s, however, QPM started to be used more and more extensively. The key for this was the development of advanced techniques for periodic poling.

Overview on Benefits and Problems

In short, the possible benefits of QPM are:

When a chirped QPM crystal is used for nonlinear frequency conversion, the temporal shape of the converted and/or the unconverted pulse can be modified substantially. For suitably designed chirped structures, pulses with tailored temporal shapes can be obtained.

A particular case of a non-periodic structure is a “chirped” structure, where the poling period varies monotonically along the beam direction. A possible application of such chirped QPM structures is a special method of pulse compression [4], to be used e.g. in the context of chirped-pulse amplification. Here, a strongly chirped pulse is frequency-converted such that the resulting pulse is not chirped and thus much shorter. Such nonlinear compressors can handle high pulse energies, but are unfortunately fairly limited in terms of the maximum input pulse duration.

The most popular technique for generating quasi-phase-matched crystals is periodic poling of ferroelectric nonlinear crystal materials such as lithium niobate (LiNbO3), lithium tantalate (LiTaO3) and potassium titanyl phosphate (KTP, KTiOPO4) by ferroelectric domain engineering. Here, a strong electric field is applied to the crystal for some time, using microstructured electrodes, so that the crystal orientation and thus the sign of the nonlinear coefficient are permanently reversed only below the electrode fingers. The poling period (the period of the electrode pattern) determines the wavelengths for which certain nonlinear processes can be quasi-phase-matched. Typical poling periods are between 5 and 50 μm. See the article on periodic poling for more details.

More recently, interesting work has been done on QPM in orientation-patterned gallium arsenide (OP-GaAs). This material has a very high nonlinear coefficient and a wide transparency range of 0.9–17 μm, making it very attractive e.g. for optical parametric oscillators emitting in the mid-infrared spectral range [6]. There are several different techniques for fabricating such materials – see the article on orientation-patterned semiconductors. 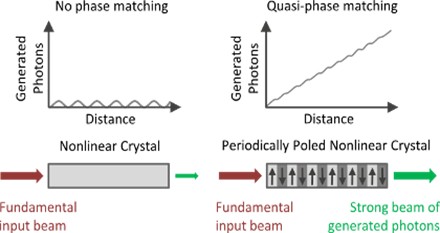 You have found the Best Place for Your Banner – Here!

well known with an extra-wide
skyscraper banner which will be displayed here (with a given probability per page view).

This website is immensely popular – see the detailed statistical data.

For example, your banner gets ≈13,000 views per month if you choose 10% probability per page view.

The users of this resource are mostly

working on laser technology and related areas of photonics – exactly those you want to reach.

You can even make the display probability dependent on certain topics – e.g., increase it for pages on lasers!

With our convenient selection tool, this is easy to do.

Get your banner placed on pages with high-quality content, rather than on pages which are crowed with ads! Our pages give visibility just for you!

On this website, you know exactly on what kind of pages your banner is placed: mostly encyclopedia articles and buyer's guide pages – not some undefined bunch of materials.

Our convenient tool makes it easy for you to define the placement of your banner and to find out the cost.

Also, we deliver a diligent and flexible service, helping you to save time. We even offer to assemble your animated banner!

Compare our prices with those at other places: we deliver better value for money!

Visit our page on advertising banners to get more details!