An RGB source is a light source which emits at the same time red, green and blue light. Such sources are required mainly for color display applications, for example for large-screen video shows. A wide range of colors can be obtained by mixing different amounts of red, green and blue light (additive color mixing, see Figure 1). A possible combination of wavelengths is 630 nm for red, 532 nm for green, and 465 nm for blue light.

Many currently used projection displays (“beamers”) are based on an arc lamp, combined with various color filters. While an arc lamp is much cheaper than a laser source of comparable output power, it does not allow for a high wall-plug efficiency, it has a limited lifetime, and the poor spatial coherence of the output imposes restrictions on the achievable image quality. Also, the available color space is not very large. Therefore, laser sources are under investigation that could offer a wider color space, much better spatial coherence (beam quality), and higher power efficiency. Such RGB laser sources emit light in the form of laser beams – either one beam for each color, or all colors combined in one beam.

Color Perception and the Chromaticity Diagram

Color perception is not just an issue of physics, but depends on the workings of our eyes. The retina of the human eye contains just three different receptors with different sensitivity to light at different wavelengths. (There is actually a fourth kind of receptor with yet another spectral response curve, but this is used only for vision at very low light levels.) The perception of colors is based on registering the relative strength of excitation of the three types of receptors. Therefore, the perceived colors are projected to an only three-dimensional space. (Most mammals actually use only two different color receptors, shrinking the color perception even to two dimensions.) As a result, all perceived colors can be located in a two-dimensional chromaticity diagram as shown in Figure 1, if the possibility of varying the optical intensity of each color is ignored.

In the case of laser-based RGB sources, the red, green and blue beams usually have a relatively narrow optical bandwidth, i.e. they are close to monochromatic. In the chromaticity diagram, such beams are associated with points at the border of the colored region (the gamut of human vision). By mixing, e.g., three monochromatic beams, all those colors can be reproduced which lie in the triangle spanned by the corresponding points. For comparison, the accessible color range for a cathode tube display, a lamp-based beamer or a color printer is a triangle with the edges lying well inside the diagram, so that the spanned area is usually much smaller. A significant further improvement of a laser-based projection system would be to add a fourth wavelength.

The choice of the three wavelengths of an RGB source determines the so-called color rendering index (CRI), which is a quantitative measure of how well it is possible to judge the color of objects when these are illuminated with white light consisting (in our case) of the three spectral components. Further, the choice of wavelengths influences the possible luminous efficacy of the source, and the two aspects can be in conflict with each other. For example, a long wavelength of the red beam is favorable in terms of color rendering, but tends to diminish the luminous efficiency because the human eye's sensitivity drops rapidly with increasing wavelength in that region.

The reason why good color rendering is more difficult with pigments (e.g. of paints, dyes, or inks) than with laser beams is essentially that pigments work on the basis of subtractive color mixing, and this approach does not allow the combination of relatively bright colors with narrow optical bandwidths: if a pigment were to generate a very “pure” color (close to monochromatic light), it would have to absorb all light outside a narrow wavelength band, and leave only a tiny portion of the incident optical power. Conversely, a bright yellow pigment, for example, has to transmit not only yellow, but also a lot of red, orange and green light, as it could otherwise not look bright. Such a mixture of different wavelengths, however, cannot correspond to a point in the color diagram which is close to the boundary, where the monochromatic beams are located.

Note that the availability of a practical laser-based RGB source would not automatically make it possible to realize projection displays for entertainment with a faithful color rendering in a wide color space. Video material covering that wide color space would also be required. Currently used videos are based on a smaller color gamut, so that color information is lost. The small color gamut of the video may be transformed into a larger gamut for the display, but in that case the color rendering will not be faithful.

optical powers below 1 W per color are sufficient for indoor digital projection displays (with not too much ambient light) with a projection area of up to a few square meters. For hand-held devices, even a few tens of milliwatts are sufficient, although higher power levels are desirable for operation under non-optimum ambient light conditions. Cinema projectors require 10 W per color or more. Suitable projector technology exists, but the RGB sources have not yet reached sufficient power, maturity and cost effectiveness, e.g. for application in cinemas. A smaller market with lower sensitivity to cost is the area of flight simulators.

In most cases, RGB sources need to have a reasonable or even good beam quality, e.g. if the display contains a projector which scans the displayed pixels point by point; here, a sufficiently small pixel size (for high resolution) requires a high beam quality. For other projector types, the beam quality demands may be lower.

There are special RGB sources which can be used for stereoscopic displays, called 6P RGB sources. For each of the red, green and blue colors, they have two spectral components which differ in wavelength e.g. by 20 nm. For viewing, one can then use special filter glasses which transmit only one set of wavelengths (R1, G1, B1) for the left eye and another set (R2, G2, B2) for the right eye. That way, one can produce independent images for the two eyes.

Depending on the type of projector engine, the three components of an RGB source may or may not have to be power-modulated according to the video signal. Power modulation is most often needed in case of scanning projectors, particularly in the context of low-power miniature devices, where the use of external optical modulators is not practical. The modulation bandwidth required is typically in the region of tens of megahertz or (for higher resolution) even > 100 MHz. This is possible when laser diodes are used, but not when doped insulator solid-state lasers are involved.

The requirements in terms of optical bandwidth can be very different for different applications. For some applications like holography, single-frequency sources are wanted. For application in displays, a narrow laser bandwidth can be detrimental, because it can easily lead to disturbing laser speckle effects. Although those can also be reduced with special display screens, it is desirable to have a substantial bandwidth of the laser source for such applications.

RGB laser sources are not only used for color projection displays, but also in some other areas:

Different approaches can be taken to construct RGB sources; the most important ones are discussed in the following.

One possibility is to use three lasers, each emitting light with the wanted color. The problem is, however, that visible lasers are severely limited in performance compared with their near-infrared counterparts. At least a few hundred milliwatts of nearly diffraction-limited output, which would be sufficient for not too large indoor projection displays, can be generated with red and blue laser diodes, whereas there is unfortunately no green laser diode with similar performance and a sufficiently long lifetime. Therefore, the green light usually has to be generated by intracavity frequency doubling with a Nd:YAG or Nd:YVO4 laser emitting at 1064 nm.

There are also RGB sources where not only green light, but also red and blue light are generated with frequency doubling. Instead of a diode pumped YAG laser as discussed above, one can use diode lasers for all colors. Efficient frequency doubling at moderate power levels (e.g. continuous-wave lasers with powers of the order of 1 W) cannot be achieved in a single pass through a nonlinear crystal, but with resonant frequency doubling, provided that single-frequency lasers are used. If a laser diode cannot directly reach the required optical power level, one can use an amplifier, e.g. a tapered semiconductor amplifier or a fiber amplifier.

Intracavity frequency-doubled VECSELs and devices with single-pass doubling in a waveguide are also attracting increasing interest for that purpose, because they have the potential for cost-effective mass production. Here, one uses high-power laser diodes for pumping semiconductor chips, which are the gain media of lasers with external resonators. Each of those resonators contains a nonlinear crystal and possibly a bandpass filter.

Another option is to generate all three colors with a combination of nonlinear frequency conversion stages, starting from a single high-power diode-pumped solid-state laser.

For example, one may start at 1064 nm, generate the 532-nm green light by frequency doubling, use part of it to pump an optical parametric oscillator emitting a signal e.g. at 631 nm (red output) and an idler at 920 nm. The latter can be frequency-doubled to obtain blue light at 460 nm.

The frequency conversion is greatly simplified if a mode-locked laser is used which generates ultrashort pulses with a sufficiently high peak powers for efficient single-pass conversion. For example, such systems based on picosecond vanadate lasers have been developed for commercial RGB projection displays with multi-watt output per color. Also, this concept has been demonstrated with a passively mode-locked thin-disk Yb:YAG laser at 1030 nm, generating multi-watt average output powers for all colors [3].

There are many other possible schemes, involving different combinations of parametric oscillators, frequency doublers, sum frequency mixers, and the like. The evaluation and comparison of such conversion schemes are a complex task, since the performance of the different nonlinear conversion stages depends not only on the crystal materials but also on optical (peak) powers, pulse durations, and phase-matching issues.

The RP Photonics Buyer's Guide contains 21 suppliers for RGB sources. Among them: 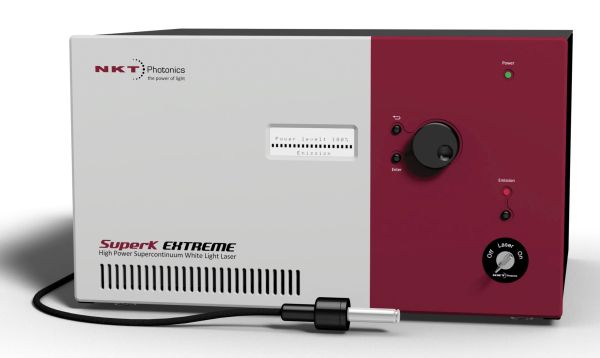 Forget the hassle of combining different lasers to create the RGB source you are looking for. Our SuperK white light lasers provide all the visible colors you need in a single diffraction limited beam out of a fiber. You can combine it with one of our accessories and turn it into an RGB source or even a tunable RGB source.

RPMC Lasers offers one of the widest selections of RGB sources on the market with hundreds of diodes and DPSS laser available in the red, green and blue wavelength ranges. These lasers are available both single mode and multimode, and with fiber-coupled or free space output configurations. 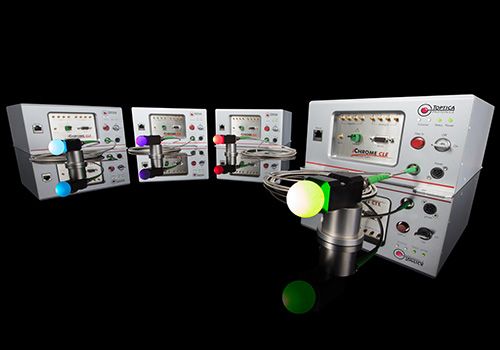 The iChrome family of multi-laser engines addresses the need for lasers with multiple colors. These applications require a flexible laser source that provides several wavelengths from one optical fiber.