The intensity profile of the optical spectrum of a signal, such as an ultrashort pulse, can easily be measured using some kind of spectrograph. For the more difficult task of retrieving the spectral phase, more sophisticated methods are required, as explained in this article.

The basic principle of spectral phase interferometry is that two pulses are interferometrically combined, and the optical spectrum of that combination is recorded. An essential detail is that one of the pulses is subject to a time delay τ. If the electric fields of the two pulses are described with phasors E1(ω) and E2(ω), the additional time delay translates into a phase factor exp(−i ω τ) for one of the pulses. Apart from irrelevant prefactors, the combined field is thus

from which one can see that the optical spectrum is modulated (see Figure 1). The oscillating term has a phase

which shows that there is an oscillation determined by the time delay, the phase of which is also influenced by the difference of the spectral phases of the two pulses.

Spectral phase interferometry has some relation to Fourier transform spectroscopy; however, one actually records data in the Fourier domain rather than in the time domain.

A first method for characterizing a pulse uses a reference phase with a well-characterized spectral phase, which spans the same spectral region. The time delay is chosen such that the period of spectral modulation can be well resolved with the given spectrograph, but is fast enough for an accurate phase determination. The phase of the recorded spectrum can be conveniently and precisely obtained from the spectral intensity curve.

A high sensitivity can be achieved, as such a heterodyne method works well even if the signal pulse energy is much lower than that of the reference pulse. Also, no nonlinear crystal is required, thus avoiding possible bandwidth-limiting effects. Finally, an accurate intensity calibration of the spectrograph is not required, since only the fast modulation of the spectrum is of interest, not the slow variation of intensity. However, the need for a suitable reference pulse is clearly a disadvantage.

A convenient way of obtaining a reference pulse can be to send a copy of the signal pulse through a sinusoidally modulated phase modulator at a time close to the zero crossing of the phase. (For example, an electro-optic modulator may be inserted in one arm of a Mach–Zehnder interferometer.) The nearly linear temporal phase modulation then corresponds to some spectral shift of magnitude δω. The spectrum of the combined pulses then has a modulation phase

where the approximate relation holds if δω is not too large. This shows that the spectral derivative of the phase of the signal pulse can be obtained, which is the frequency-dependent group delay.

This method, called spectral shearing interferometry [1, 10, 11], works well for relatively long pulses. For very short pulses, where the group delay variation within a pulse duration is small, it is difficult to obtain a sufficiently large spectral shift in the modulator. A larger spectral shear can be achieved by using a nonlinear interaction, as discussed in the following section.

Another method of spectral shearing interferometry, often applied for the complete characterization of ultrashort pulses, is called Spectral Phase Interferometry for Direct Electric-field Reconstruction (SPIDER) [4]. Here, the signal pulse is split into two identical copies with a significant temporal distance, so that there is no temporal overlap. Another pulse, derived from the same input pulse, is strongly temporally broadened by sending it through a highly dispersive optical element, such as a long block of glass or a pair of diffraction gratings.

The long chirped pulse and the two copies of the signal pulse are then combined in a nonlinear crystal, where sum frequency generation occurs (see Figure 2). The two signal pulses overlap with different temporal portions of the chirped pulse, which have different optical frequencies, so that there is also a spectral shear between the two upconverted pulses. Therefore, the optical spectrum of the sum frequency signal reveals the temporally resolved group delay in a way which is analogous to that discussed above. From the group delay, it is easy to retrieve the frequency-dependent spectral phase, so that complete pulse characterization is achieved.

In comparison with frequency-resolved optical gating (FROG), the SPIDER method has various advantages and disadvantages:

A comprehensive comparison of SPIDER and FROG techniques is difficult, because there are many variants of both methods, which have specific advantages under certain circumstances. 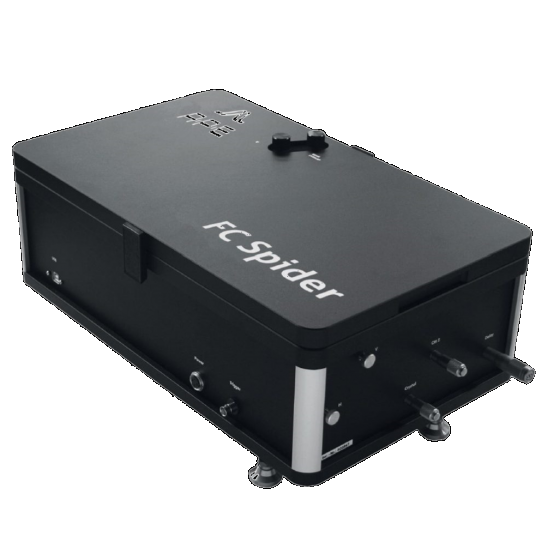 The APE product family for Spectral Phase Interferometry for Direct Electric-field Reconstruction (SPIDER) is designed for phase-resolved ultrafast pulse measurements. FC (Few Cycle) Spider offers a precision tool for the complete characterization of ultrashort laser pulses with just a few electric field cycles — down to 5 fs pulse width. LX Spider is a highly compact instrument for the characterization of femtosecond laser pulses in the range of 16–200 fs. Spider IR is the best choice for pulses between 30 and 500 fs at 1 μm central wavelength.