List of suppliers for
sum and difference frequency generators

A special case is sum frequency generation with an original pump wave and a frequency-doubled part of it, effectively leading to frequency tripling. Such a cascaded process can be much more efficient than direct frequency tripling on the basis of a χ(3) nonlinearity.

Some typical applications of sum frequency generation are:

Difference frequency mixing with pump waves of similar frequency can lead to a mixing product with a long wavelength. Some examples are:

Such mid-infrared wavelengths are required, e.g., for the laser spectroscopy of gases.

Difference frequency generation can also be used for generating terahertz waves. For efficient terahertz wave generation, there are special semiconductor-based photomixers, where the terahertz beat note of two similar optical frequencies generates an oscillation of the carrier density in the semiconductor, which is translated into an oscillating current and then into terahertz radiation.

Insight from a Photon Picture

In a sum frequency mixer, both pump waves experience pump depletion when the signal becomes intense. For efficient conversion, the photon fluxes of both input pump waves should be similar. If one input wave has a lower photon flux, and its power is totally depleted somewhere in the crystal, there can be backconversion during subsequent propagation.

The carrier–envelope offset frequency (CEO frequency) of the output of a sum or difference frequency mixer is essentially the sum or difference, respectively, of those frequencies for the input. (The result may have to be corrected by subtracting the line spacing, which is identical to the pulse repetition rate, in order to get back to the interval from zero to the line spacing.)

It is interesting to consider what happens if difference frequency generation is applied to the low- and high-frequency components of a broadband frequency comb, which can be generated e.g. with a femtosecond laser, possibly followed by an optical fiber for supercontinuum generation. The CEO frequency of the output is then the difference between two identical frequencies, i.e., zero. This implies that the carrier–envelope offset phase is temporally constant. (In practice, it may still exhibit some drift, but only with a quite limited range.) This principle is realized in some the wises for obtaining a more or less constant CEO phase without employing active stabilization methods.

The RP Photonics Buyer's Guide contains 12 suppliers for sum and difference frequency generators. Among them: 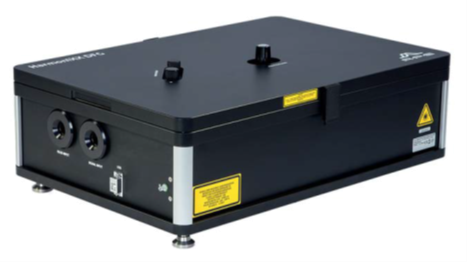 The APE HarmoniXX DFG is designed to extend APE’s product line of wavelength converters into the mid-IR range. It mixes signal and idler output beams of synchronously pumped OPOs and is available for various pump sources. The DFG output wavelength can be changed easily by tuning the OPO signal. It covers a wide wavelength range from 4 μm to >15 μm.

This amazing tool is extremely helpful for the development of passive and active fiber devices.

Calculate mode properties such as

A fiber's index profile may be more complicated than just a circle:

Here, we "printed" some letters, translated this into an index profile and initial optical field, propagated the light over some distance and plotted the output field – all automated with a little script code.

in single amplifier stages or in multi-stage amplifier systems, with double-clad fibers, etc.

Find out in detail what is going on in such a system!

For example, analyze and optimize the

for lasers based on double-clad fiber, with linear or ring resonator, etc.

Apply any sequence of elements to your pulses!

… and even Bulk Devices

All this is calculated with high efficiency!

Work with the standard gain model, or define your own level scheme!

Define multiple pump and signal waves and many ASE channels – each one with its own transverse intensity profile, loss coefficient etc.

The power calculations are highly efficient and reliable.

Simple Use and High Flexibility Combined

For simpler tasks, use convenient forms:

Script code is automatically generated and can then be modified by the user. A powerful script language gives you an unparalleled flexibility!

Competent technical support is provided: the developer himself will help you and make sure that any problem is solved!

Boost your competence, efficiency and creativity!

Efficiency and success of
R & D are not a matter of chance.

See our detailed description with many case studies!